After a couple of months of only reporting on impressive rises, today we report on a first weekly loss for Ethereum. Ethereum’s overall market capitalization, that was over $900 million seven days ago and crossed over a billion dollar for the first time during the week, is now around just $830 million.

Looking at the charts we see that the price of ETH is now just around $10.6 down from $11.6 from our last report and as high as $15 during the week. The fall is very recent as the ETH/USD exchange rate fell by 20% over the last twenty-four hours.

Despite some news coming out about alternative solutions meant to bring Ethereum’s capabilities to the bitcoin blockchain (such as Rootstock- Finance Magnates is currently working on an interview with its founder), nothing seems to justify this rush to sell the cryptocurrency. Considering this, the move is probably just a consolidation of profits by traders and investors after the hype of the recent Homestead release. 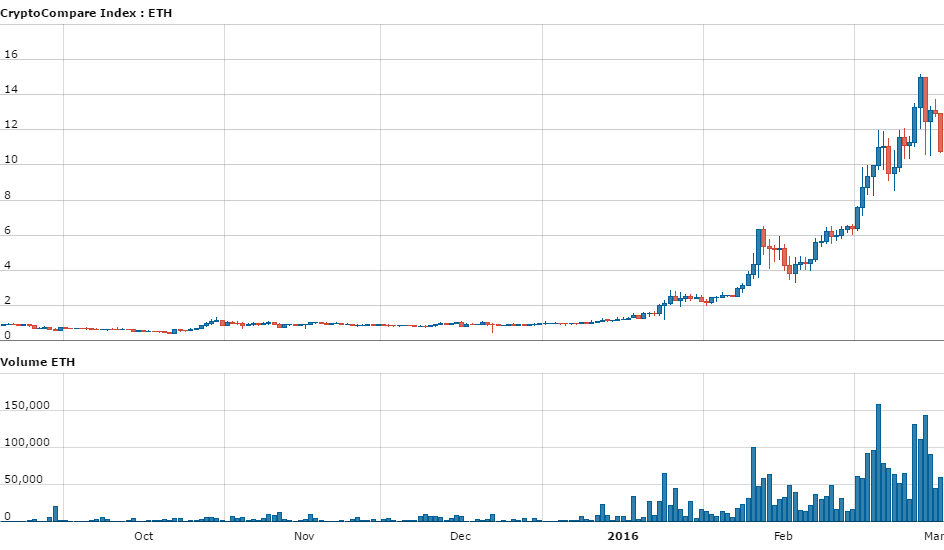 Contrary to this, showing the continued adoption of Ethereum is the news that BTCS Inc. (OTCQB: BTCS), which engages primarily in bitcoin mining, is launching a pilot program to begin securing Ethereum’s blockchain. In addition to the pilot program, BTCS just revealed that it has secured a Ethereum-mining hosting contract. The contract uses approximately 50 kilowatts of the company’s 3 megawatt capacity.

Charles Allen, CEO of BTCS, commented: “As the first U.S. publicly-traded blockchain-focused company we want to provide our investors diversified exposure to digital currencies and blockchain technologies. Given the recent success of Ethereum and the growing interest from major players in tech and finance, we believe it’s an ideal time to launch a pilot program. With the capacity expansion we completed at our North Carolina facility in 2015, we’re well-positioned to scale operations when necessary, even as we continue to ramp our current bitcoin-focused transaction verification operations.

Like many others, we’re excited for the prospects of Ethereum. While Ethereum is focused on smart contracts, it’s important to note that there are currently numerous companies working on solutions to build smart contracts on bitcoin’s blockchain, leveraging the deep security provided by its more established and secure blockchain.”