Just a week ago we noted that Ethereum marked a significant milestone in its road to the top of the cryptocurrency food chain, and today we see again that it just keep rising and marking new records.

Ethereum’s overall market capitalization increased by about 10% in the last twenty-four hours, reaching about $905 million as of the time of writing, up from $730 million in a week. Besides the impressive growth rate, this figure shows Ether keeps its value as more than the total market cap of all other altcoins combined or over a tenth of the value of bitcoin itself (at $6.3 billion).

Looking at the price chart of Ether we can see it passed the benchmark level of $11 and the exchange rates now stand at around $11.6 (or 0.028 BTC). Supporting the rise are large ETH trading volumes also – about $28.9 million in the last twenty-four hours – over a third of bitcoin’s daily volume $74.7 million. 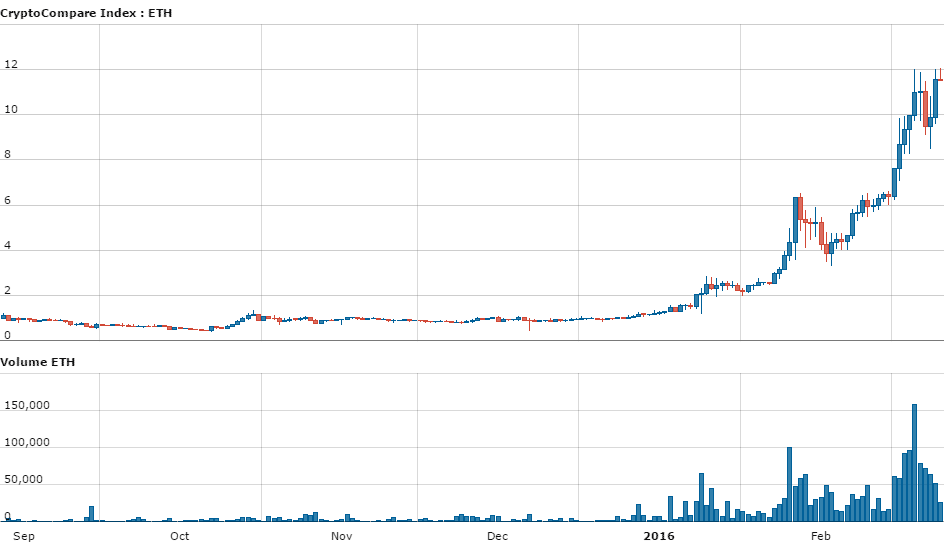 One topic that Ethereum detractors often bring up in online forums is that the currency does not have any of the vast market infrastructure that the bitcoin ecosystem developed. The team at <ether.camp> assured the Ethereum community now that they have created a solution to at least part of it – repurposing a bitcoin ATM to support cash to ETH conversion.

They were able to do this as the Lamassu ATM employs open-source code which they modified. They say this can be further developed to allow more interesting uses such as interacting with smart-contracts directly from a machine, for example casting a vote for a resolution in a Decentralized Autonomous Organization.

If you are interested in converting some dollars to Ethereum right now, this first ATM is located in San Mateo, California. However, if the cryptocurrency keeps its current growth rate it won’t be long until the bitcoin ATM manufacturers might want to implement ETH support across the world.