The abrupt move past $10,000 caused roughly $74 million in liquidations of long contracts on BitMEX; CoinTelegraph reported that this caught many derivatives traders “off guard.”

At press time, the price of BTC was sitting around $10,240, and appeared to be continuing along an upward trend.

The boost over $10,000 appears to have come from two main factors: according to CoinTelegraph, the liquidation of over-leveraged shorts can be partially attributed. Additionally, it appears as though traders may have collected profits on some of their altcoin positions. 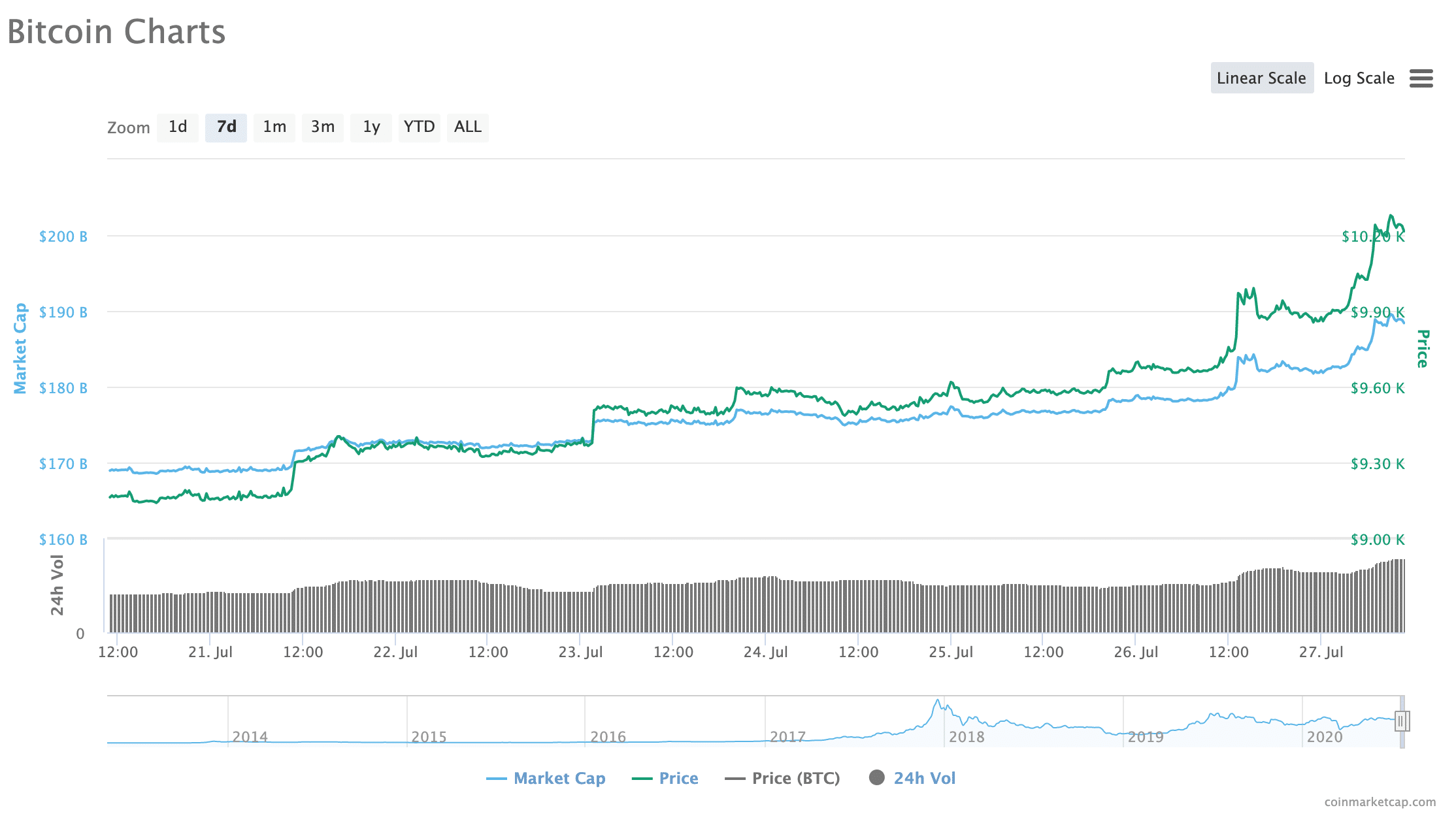 Indeed, it seems as though the boost in the price of Bitcoin is almost directly correlated with drops in the prices of some of the altcoins that have made headlines for their positive price performances recently.

While Bitcoin’s movement over $10,000 seems to have generated some excitement in the cryptosphere, it’s uncertain whether BTC will be able to sustain a level over $10,000 anytime soon.

Indeed, for a number of different reasons, the $10,000 price point appears to have been a sort of stuck-point for Bitcoin in the past.

Part of the reasons for this may be psychological. In an article for Business Insider several years ago, CNBC Senior Editor John Carney wrote of “The Curse Of Dow 10,000”.

This term describes a similar phenomenon: from 1999-2003, every time the Dow touched past the 10,000 level, it would “succumb to a bear market and fall below it every time.”

While the reasons for this phenomenon are unclear, the curse of 10,000 seems to have something to do with $10,000 being a marker at which BTC (and other financial markets) tend to have stalled out in the past.

“If the markets have in the past displayed a tendency to pull back at a certain level, rational investors can anticipate this and begin selling at that level,” Carney wrote.

Still, some analysts within the space are optimistic: Peter Brandt, a well-known crypto trader and commentator, wrote on Twitter that he expects the price of Bitcoin to eventually make a run to $50,000.

“That is actually where my head is. Massive symmetrical triangle in $BTC points to ATHs, then $50k,” he wrote.

That is actually where my head is. Massive symmetrical triangle in $BTC points to ATHs, then $50k

And, of course, @hodlonaut made the same prediction that they make each time Bitcoin surpasses the $10k mark:

Ok, guys. I'm gonna go out on a limb and make a small prediction here:

We will never see Bitcoin below $10k again.

Still, it’s unclear if this time will be any different.