While Bitcoin is continuing on one of the most non-volatile periods of its recent liftetime, a number of analysts have said that an “altcoin season” is beginning: there have been many reports of wild price swings in a number of altcoins; most recently, however, is LINK, the native coin of blockchain data oracle Chainlink.

Indeed, the value of link surged roughly 34.8 percent over the course of the 24-hour period between Saturday, July 12th, and Sunday, July 13th–LINK sat around $6.10 on Saturday and rose suddenly as high as $8.22 before leveling off around $7.88. LINK held the #10 spot on CoinMarketCap’s cryptocurrency by market cap list.

The surge over the weekend was the continuation of a greater rally that began at the beginning of the week: on Monday, July 6th, LINK was sitting around $4.10, where it had stalled for weeks. However, this means that the rise from last Monday to today ($7.97 at press time) is a whopping 94.39 percent increase. 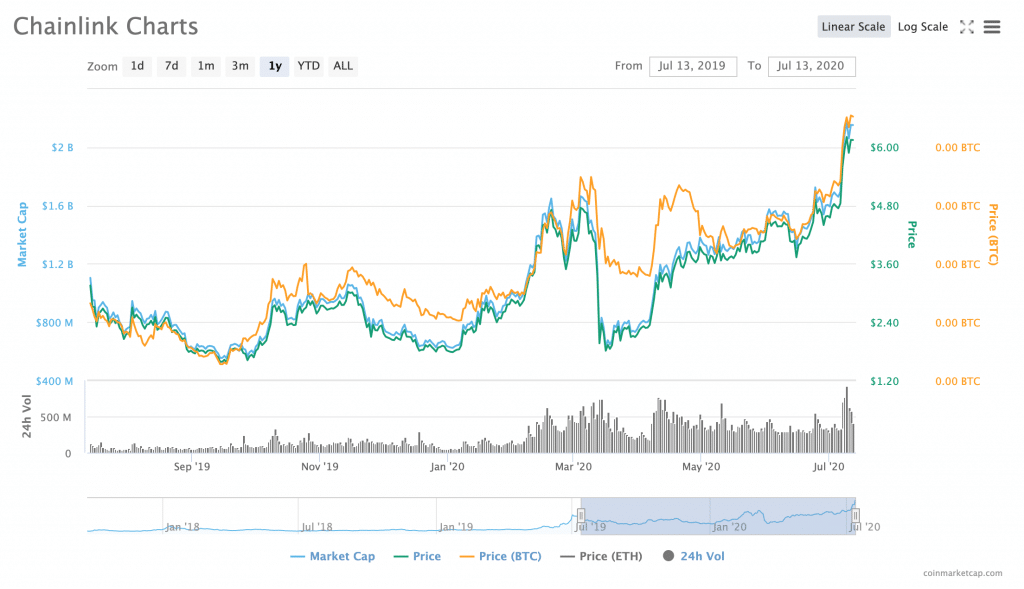 The most recent price rally puts LINK at a new all-time-high; LINK previously reached highs around 4.75 during the month of March before suddenly plunging to $1.81 several days after March 12th, which is widely known as crypto’s “Black Thursday.”

The reasons behind the rally

Why, exactly, did this astronomical rise occur?

There seems to be a fairly good chance that the rally was the result of a “fear of missing out” (FOMO) trend among investors: once the price initially spiked between Monday and Tuesday of last week, investors may have clambered onto LINK as a way of making further gains: this, in turn, caused the price to continue to increase.

Beyond FOMO, however, CoinTelegraph noted that Chainlink has secured a number of high-profile partnerships throughout 2020 with other companies in the cryptocurrency sector. For example, on July 8th, Chainlink became the oracle solution provider for Nexo, a cryptocurrency lender with 800,000 users.

Chainlink has also garnered two more partnerships over the last two months with Hedera Hashgrpah and Matic network, and was mentioned in a blog post by Google in June. The blog post is entitled “Building hybrid blockchain/cloud applications with Ethereum and Google Cloud.”

Additionally, LINK seems to be the latest coin to have benefitted from what a number of traders are describing as an “Alt Season”: as Bitcoin’s levels of volatility have significantly decreased over the course of the last two months, traders are increasingly turning to altcoins as possible sources of profit: COMP (Compound), ADA (Cardano), and XTZ (Tezos) also seem to have done particularly well.

As such, Bitcoin’s dominance in cryptocurrency market capitalization seems to have loosened its grip, and may continue to slide further down.

it’s about time. The CRP in the utopia ecosystem has already added 200%!