When Tyler and Cameron Winklevoss, the twin-brother founders of the Gemini cryptocurrency exchange were preparing to hear the SEC’s decision on their Bitcoin ETF application just over one year ago, the excitement was palpable.

In the days running up to the United States’ Securities and Exchange Commission’s (SEC) decision on the matter, the price of Bitcoin swole–BTC rallied from roughly $6300 in mid-July of 2018 to around $8200 by July 25, where it stayed for several days before the SEC’s eventual decision to deny the application on July 27.

A month later, the SEC denied 9 other Bitcoin ETF applications.

What ensued was a bear market that drove Bitcoin down to $3200 (its lowest price in over a year), in addition to an almost comically-long list of delays and denials from the SEC around Bitcoin ETF applications. A number of new companies, including Van Eck, SolidX, Bitwise Asset Management, and many others tried (and tried again, in some instances).

The VanEck SolidX #Bitcoin #ETF decision has been postponed by the SEC until October 18, 2019 at which point the SEC must either approve or disapprove the proposal. A physical, liquid, insured Bitcoin ETF may serve the public interest. Onwards! 🤟Source: https://t.co/QsEYfp6liR pic.twitter.com/4CDNPslFxn

However, the long wait on two of these decisions will finally be overcome in October–according to US law, the SEC can not extend its decision period for over 240 days. Therefore, Bitwise will be notified on October 13, which VanEck/SolidX will receive its decision on the 18th. Wilshire Phoenix, which submitted its application more recently, may receive another delay in September.

Why have these delays continued for such a long time? Could US markets really expect to see a Bitcoin ETF this time around–and why does it matter so much in the first place?

Why is this taking so long?

The SEC’s choice to delay these decisions seems to be indicative of a certain openness to the possibility of a Bitcoin ETF–after all, if the Commission was completely closed off to the idea, then surely, it would have denied these applications outright.

At the same time, however, the fact that it hasn’t made any moves toward an approval seems to spell out deep uncertainty. In an interview with CNBC conducted in June, SEC Chairman Jay Clayton explained that the Commission has two primary concerns.

“The first is custody: custody is a long-standing requirement in our markets, and if you say you have something you really have it,” he explained.

Given the fact that ownership of cryptocurrencies is determined by who has possession of a string of characters (and the many, many examples of theft of these characters over the last several years), the rules of custody in crypto are quite different than in the world of traditional assets–and Clayton does have a point: while industry insiders have worked to create custody standards and solutions, there isn’t an enforceable code of conduct in place.

“I’m not just going to flip a switch and say this is just like stocks and bonds because it’s not.”

Clayton explained that the SEC’s other major concern is market manipulation: “we have sophisticated rules and surveillance to ensure that people are not manipulating the stock market, those cryptocurrency markets by large do not have that, and we’re working hard to see if we can get there.”

The bottom line is that there are still a lot of unknowns and precedents that have yet to be established: “I’m not just going to flip a switch and say this is just like stocks and bonds because it’s not,” he said.

Kyle Asman, a partner at BX3 Capital, echoed Clayton’s sentiments in an email to Finance Magnates. “The SEC delayed its decision again because there is still no clear regulation, and still no way to prevent market manipulation. Until there is a mechanism in place to ensure there is no market manipulation, we are not going to see approval of an ETF.”

As such, the SEC may be no more likely to approve a Bitcoin ETF than it was a year ago: “the SEC has given no indication that it will do anything but continue to delay the ETF decision,” Asman said.

“Generally, the SEC has been constructive towards crypto but it is tough for them to do much more until Congress passes some legislation on the crypto regulatory front such as the Token Taxonomy Act. Otherwise, regulators will be left to interpret archaic securities laws.”

Bitwise CEO is confident about an approval

However, there is at least one optimist on the scene–Hunter Horsely, CEO of Bitwise Asset Management.

Bitwise filed an application to create a Bitcoin ETF earlier this year along with a public report about market manipulation within the cryptocurrency industry that shocked the world.

During an interview with Bloomberg UK conducted on August 15th, Horsley said that he’s confident about the prospect that the United States’ Securities and Exchange Commission could give a Bitcoin ETF the go-ahead, and that latest delay is simply par for the course.

“So the most recent delay we view as largely procedural,” he said. “From the initial filing, there are 240 days for it to be considered and that puts the final decision on October 13. Our filing is currently the first in line, and so I think we weren’t surprised by the window extending and the amount of time continuing.”

ETFs are already available in Europe

If US regulators do approve the launch, US markets will have some serious catch-up to A number of Bitcoin- and crypto-based ETFs are already available in Europe, including several exchange-traded investment products that were launched by Swiss company Amun AG and US-based investment firm Invesco on Switzerland’s SIX stock exchange and the London Stock Exchange earlier this year.

Invesco’s ETF was launched in partnership with Elwood Asset Management. At the time of the launch, Bin Ren, CEO of Elwood, said in a statement that the growing proliferation of exchange-traded funds (along with the launch of the Elwood/Invesco blockchain ETF) in European markets demonstrated growing adoption of blockchain technology.

“We are beginning to see the technology being used by financial services companies in particular, but we expect greater application of blockchain technology across a wide range of industries,” he explained. “We believe the potential for blockchain to change the global economy is greatly underappreciated in today’s market, much like the internet was in the beginning when most people couldn’t see past its usefulness for email.”

Why is it so important that the US market has access to a Bitcoin ETF?

But if crypto-based exchange-traded products are becoming so widely available elsewhere in the world, why is it so important that a Bitcoin ETF is launched in the United States?

After all, it is perfectly legal for US-based investors to buy into offshore assets. In an article for Investopedia Finfix and Analytics Private Limited founder Prableen Bajpai described ETFs as “a convenient way for investors to access foreign markets.”

But Bitwise Head of Research Matt Hougan said in the same interview with Bloomberg UK that the push to launch a Bitcoin ETF in the US has to do with the desire to bring US-based financial advisors (and the capital they control and influence) into cryptocurrency markets.

#GBTC is trading at a 36% premium over spot #BTC. This should give you the idea of the scale of the institutional demand for the BTC #ETF. #bitcoin #cryptocurrency #crypto

And indeed, the majority of financial advisors and institutional investors within the United States may still recognize cryptocurrencies–including Bitcoin–as an ‘untouchable’ asset class.

However, there are a number of other kinds of investment products that institutional investors and financial advisors are increasingly willing to dip into–most prominently among these, perhaps, are crypto hedge funds.

It is true that cryptocurrency hedge funds did suffer from the crypto winter of 2018–and gained a rather bad reputation as a result. Josh Gnaizda, CEO of Crypto Fund Research, said in November of 2018 that “we are seeing some firms now close,” and estimated that 35 of the 633 crypto hedge funds that his company tracks had been shut down since the beginning of the year. 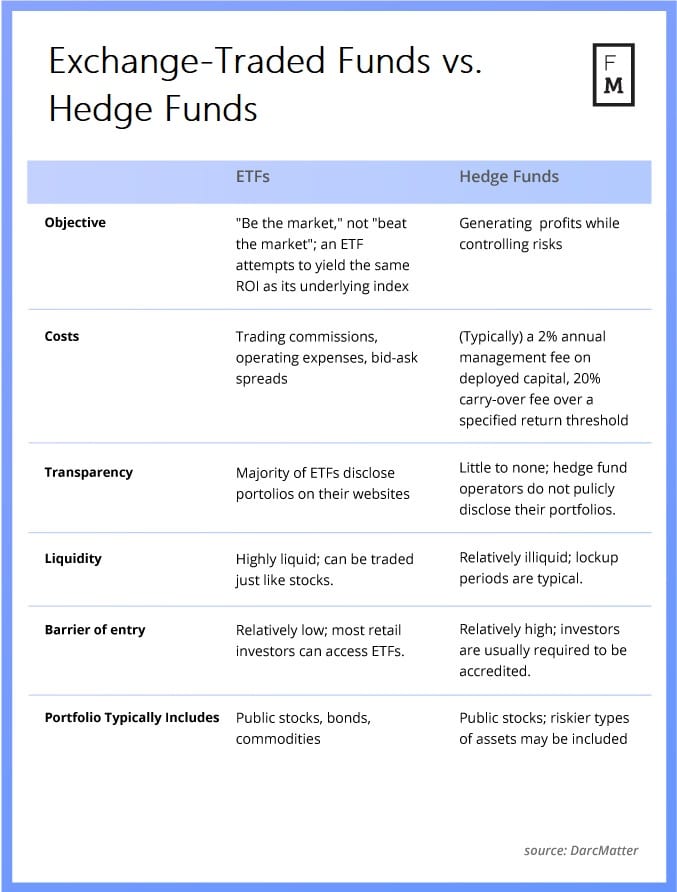 But things seem to be improving–Bloomberg reported in May that “cryptocurrency hedge funds managed three times more in investments in the first quarter of this year than in early 2018,” with a “median [of] $4.3 million between January and March, compared with $1.2 million in January 2018, suggesting demand for exposure to crypto held up even as bitcoin slumped in price by 75%.”

“I’m not sure the bitcoin ETF matters as much anymore.”

There are some voices in the industry that think that cryptocurrency investors–including financial advisors–have become more open to investing directly in Bitcoin and other cryptocurrency assets.

Andy Bromberg, co-founder of ICO-vetting platform CoinList pointed out to Yahoo Finance that retail brokerages are offering Bitcoin to their clients more often–and there is quite a lot of evidence that when high-volume investors (including institutional investors) choose to invest directly in crypto assets, retail brokerages are the venue of choice.

“We’re increasingly seeing that retail brokerages are going to offer bitcoin to their clients. Once you see that, once you see this widespread adoption, you don’t necessarily need the ETF anymore,” he said.

“I’m not sure the bitcoin ETF matters as much anymore.”

Others in the cryptocurrency industry believe that the industry’s obsession with the launch of a Bitcoin ETF is a symptom of misaligned priorities.

Indeed, last year, Ethereum creator Vitalik Buterin tweeted that the buzz around the Bitcoin ETF was indicative of the fact that the market is too concerned with institutional capital and not concerned enough with bringing in more retail investors and “everyday users:

I think there’s too much emphasis on BTC/ETH/whatever ETFs, and not enough emphasis on making it easier for people to buy $5 to $100 in cryptocurrency via cards at corner stores. The former is better for pumping price, but the latter is much better for actual adoption.

In any case, the industry will move forward, with or without the approval of the Bitcoin ETF; and while the lack of a Bitcoin ETF may slow the entry of institutional capital into the space, it certainly won’t stop it.

“When Tyler and Cameron Winklevoss…submitted an application for a Bitcoin-based ETF just over one year ago…” What are you talking about? They submitted that application in 2013. They didn’t submit anything to the SEC related to an ETF at all last year (2018). Here’s the timeline: They filed their S-1 on July 1, 2013 and amended it nine times through February 8, 2017. The SEC disapproved it the first time on March 30, 2017. Four days later, Bats submitted a petition for review, which the SEC granted on April 24, 2017. After more than a year of review, the SEC… Read more »