As the months have progressed, however, it seems more and more apparent that those astronomical predictions probably won’t come true–at least not by the end of this year.

Still, some analysts are holding onto their faith. The cryptosphere has seen a few glimmers of hope–just last month, Bitcoin rallied from roughly $6300 to around $8200 in the weeks preceding the SEC’s decision on what would have been the world’s first Bitcoin ETF (exchange traded fund.) The fund was proposed by the Winklevoss twins, two American entrepreneurs who founded the Gemini cryptocurrency exchange.

#bitcoin breached 8k. Is ETFs approval by the SEC fueling its demand as it did back in 2016?

The SEC is asking for the public opinion regarding ETF decision and has received 10X the number of responses VS this past April.

What does August hold for Bitcoin? pic.twitter.com/4i587O3neE

However, hopes were dashed when the SEC rejected the fund. Bitcoin sank back to its support level around $6000. 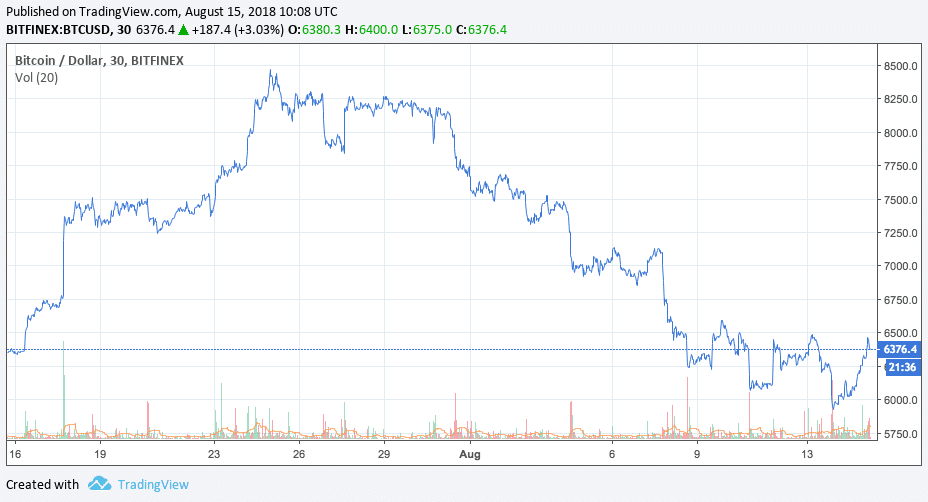 There still may be hope yet. On September 1, the SEC will announce its decision on a second proposal for a Bitcoin ETF, this one from Van Eck and SolidX. Together, the companies are hoping to issue an ETF that would be traded on the CBOW BZX.

What Will Happen? When Can We Expect to See a Bitcoin ETF on the Market

This is the third time that Van Eck and SolidX’s application for a Bitcoin ETF has been reviewed by the SEC, following two rejections. A decision on the ETF was originally expected on August 16, but the Commission postponed its decision.

Despite this unfortunate history, however, there is some belief that the third time will be the charm. Ilan Sterk, VP of Trading at Hexa Group, wrote in a Medium post last month that he believes that the companies’ latest application has a few important things going for it.

For one thing, Van Eck manages $46 billion in assets and is an “award-winning, widely recognized investment and money manager” outside of the crypto sphere, writes Sterk. Additionally, “their digital assets are insured for up to $125 million (or more as needed) by various insurance companies.”

Sterk also says that the fact that the Van Eck/SolidX ETF is intended to attract high-net-worth individuals may also sway the SEC toward approval. Each share of the fund is equal to 25 BTC, about $160,000 at current valuation.

Context: The Winklevoss Twins’ ETF Was Rejected and Why?

Others in the cryptosphere are a bit more skeptical about a Bitcoin ETF being available on the markets anytime soon, given the recent rejection of the Winklevoss fund.

In a statement published in late July, the SEC explained that the reasons behind the rejection had nothing to do with whether or not Bitcoin had inherent value as an investment. Rather, the Commission claimed that its primary concern was protecting investors against market manipulation.

Indeed, the SEC had stated months before in January that there are “significant investor protection issues that need to be examined” before a Bitcoin ETF could ever be made available on the markets.

It’s unclear whether or not the SEC’s reasoning will also apply to the Van Eck/SolidX proposal. While Sterk’s arguments do present a good case on how the Van Eck/SolidX fund could make it onto markets, the SEC’s suspicions about Bitcoin market manipulation still remains at the heart of the matter.

Are the SEC’s Concerns Legitimate?

Bitcoin IRA co-founder Chris Kline told Finance Magnates that he believes that the SEC’s concerns are legitimate. “Recent analysis from Chainalysis indicates that 1,600 investors, collectively known as Bitcoin whales, own digital assets worth $37.5 billion— a third of the Bitcoin market,” he explained.

“While I don’t believe these whales will have a predominant foothold on the industry in the future, I do believe that the SEC’s caution and oversight is necessary and legitimate in order to fully protect customers as the industry stands right now.”

Gianluca Giancola, Co-founder and Head of UX & Design at blockchain-powered loyalty ecosystem qiibee, believes that the concerns are legitimate, and that “regulators would need to ensure that there is no volatile trading happening that could potentially cause the ETF to collapse. Other factors to consider include regulatory uncertainty and the security risks involved.”

“As long as concerns around security, market manipulation, and investor protection remain, it is unlikely to be approved in the short-to-medium term,” he added.

A Bitcoin ETF Could Stabilize the Bitcoin Network and Prevent Manipulation

However, the “FIC Network takes the same position as SEC Commissioner Hester Peirce, who voted in favor of approving the ETF,” he said.

Ivanovs believes that the presence of a Bitcoin ETF on the market may actually stabilize the Bitcoin network and prevent manipulation.

“FIC Network and Commissioner Peirce both take the position that denying the Winklevoss ETF delays many institutional investors from trading bitcoin,” he said. “Volume from institutional investors would facilitate a significant regulated market that would reduce the scale of price manipulation thereby easing the SEC’s concerns. An ETF would also open up the market to more retail investors.”

Not everyone agrees that a Bitcoin ETF will be a good thing for Bitcoin in a longer-term sense. “Approving the ETF would have definitely increased the price of Bitcoin in the short term,” said Csaba Csabai, founder and CEO of InLock, to Finance Magnates. “But the product behind it wouldn’t have kept up the pace of growth.”

“For the product itself, for Bitcoin,” Csaba continued, “the best thing is if they don’t accept the ETF, whereby the current recession period could continue, letting Bitcoin find it’s real value. Since ETF approval only matters in the short term, what’s more important is to develop solutions that allow Bitcoin to be used not only for speculative services, but rather widening its usability.”

A Bitcoin ETF is “Inevitable”–But When?

Timothy Tam, Founder and CEO of CoinFi, believes that Bitcoin ETFs are “inevitable.”

“With the flood of talent entering the crypto space and also large organizations like ICE doing a physical settled bitcoin contract, there are signs that bitcoin is turning into more of a traditional financial product that simply cannot be ignored,” he said in an email to Finance Magnates. “It wouldn’t be in traditional finance’s best interest to ignore crypto.”

However, exactly when the first Bitcoin ETF would make its appearance on the markets is unknown. “2020 is my prediction,” said Ivanovs, adding that he believes that “a ‘physical Bitcoin’ ETF, meaning, Bitcoin itself would be held in custody, then this is likely to have more traction with the SEC.”

Are Bitcoin Futures a “Gateway Drug” to Bitcoin ETFs?

The SEC’s decision to allow Bitcoin futures to be traded on CBOE and CME last year are also some indication that a Bitcoin ETF will eventually make its way onto markets.

“As long as Bitcoin Futures enable speculation on traditional exchanges, ETFs could open the door for institutional investors,” said Csaba Csabai. “[This] would be beneficial for the crypto ecosystem as a whole.”

However, Csabai noted that futures and ETFs are very different from one another, and different regulatory attitudes may apply accordingly.

“While an ETF is the product itself, there are no bitcoins behind the Futures product, merely an anticipation of it’s price down the line,” Csabai explained. “There is still technological development needed to make Bitcoin exchange-tradable because when buying an ETF, someone has to actually purchase bitcoins.”

Despite differing opinions about the safety and necessary regulations surrounding a Bitcoin ETF, most voices in the blockchain and crypto industry seem to agree that it’s not a question of if, but when.

“Considering how much Bitcoin became part of mainstream economics in the past ten years, suggesting the whole product category could just vanish in the near future, or speculating that an ETF approval will never come would be naive,” Csabai said.

“If the rate of adoption continues to grow at the current pace, we will soon see an ETF, because it’s the only way institutions can access this asset class, so solving it as soon as possible is in their best interest.”

I must agree with Csabai, since Bitcoin isn’t yet ready to adopt the volume of new capital influx an ETF would impose. Super interesting times we’re living, can’t wait to see what the future brings on the crypto front.

What about listing something similar (ETF) in Canada, London, Switzerland, Australia, etc?