Various kinds of token sales have been an extremely important part of the rise of cryptocurrency. Initial Coin Offerings (ICOs) were a particularly significant part of the crypto boom that took place at the end of 2017.

However, the unregulated nature of the ICO space has left the practice with a bad reputation. As such, new kinds of token sales have begun to replace ICOs–Initial Exchange Offerings (IEOs) and Security Token Offerings (STOs.)

Recently, Finance Magnates spoke with Adv. Ziv Keinan, the founder of Ziv Keinan Digital Assets Lawyers, about the past, present, and future of the Security Token space.

Keinan will host a panel entitled “The Present and Future of Security Tokens” at the upcoming Finance Magnates Barcelona Trading Conference on July 10th and 11th. Click the image to learn more. 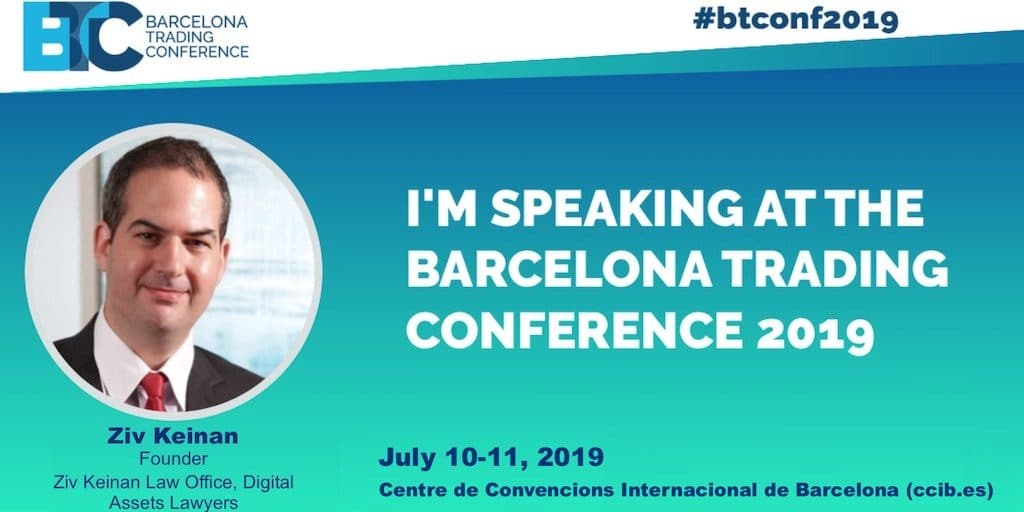 In 2017, “when we started, there was no protocol; there was almost no issuance platform or company that would deal with [launching an STO], and there were no secondary markets. Even for [companies] that said that they were doing an STO, the technology was really not mature.”

“Today, we are in a totally different place. We see big financial institutions starting to take interest in STOs; we see banks doing experiments on STOs, we see international organizations like the World Bank examining the technology.”

“So, definitely, we’ve matured,” he said. Now, “there are a lot of companies that provide issuance platform services, and there are also some secondary markets that have emerged,” although they are “not fully active.”

”This is an International Operation”

“Of course, the US market is the biggest market – everybody’s looking to see how the US market treats STOs. And we need to understand that after the 2008 financial crisis, the Americans are very cautious about new financial instruments.

Keinan said that this was totally understandable – “[but] on the other hand, in order for the technology to gain traction, the regulators in the US will need to allow more secondary market-trading, and federal laws that would allow the trading of securities between states, and the trading of tokens between states inside and outside of the US.

US regulators will also likely need to amend the definition of what an accredited investor is, Keinan said, “which is something that they are already working on.”

In the meantime, “I believe that we will see more STOs coming from the EU, as well as secondary markets and new technology – just because in terms of regulation, [the EU] is a little bit more open…it’s just a matter of time.”

Keinan also mentioned a few projects that he sees coming out of the EU at this present moment – ”there’s a few big real-estate tokenization projects, one that I’m involved in, others that have been done by other companies in this space, some still in ‘stealth mode.’”

Security Tokens Have a Role To Play in VC Funds, Across Many Industries

“There’s a very interesting use case for STOs in fund formation,” he said, pointing to SPiCE VC and Science Blockchain as some of the first VC funds to embrace security tokens.

“It allows limited partners within the VC to have greater freedom to sell the limited partnership rights to the other members of the VC (or of the fund – it doesn’t have to be a venture capital fund), or perhaps in the future also outside of the fund, and also to the fund itself.”

So, “if you own a traditional fund, you would be locked in for a period of five to ten years. But with a tokenized fund, you can sell your shares back to the fund, or you can sell it within the other limited partners. So fund formation is a very interesting use case.”

“And of course, startups want to raise money,” he said, referring to the fact that STOs have slowly been gaining popularity as a possible replacement for ICOs, IEOs, and similar tokenized fundraising models.

But it hasn’t been easy so far – ”the STO space is still a very young space, and startups are having difficulties raising money through STOs. But I believe that in the future when STOs are mature, they will be the main way to raise money for startups.”

Security Tokens – we have to change the name.

“I was never a big believer in ICOs, and I don’t really see the difference between ICOs and IEOs,” he added. “Beyond the regulatory risk that you are taking with [holding] an ICO or IEO, I really don’t understand the business model behind it, and I wouldn’t myself invest in any one of those vehicles. I think the utility token model hasn’t really worked.”

“As a lawyer, I had an opportunity to work with a project that doesn’t use a native token, but uses third-party tokens like Ether [instead]. Those projects that don’t create native tokens – I think they will be the future of finance,” he said. “This allows you not to raise money [without] a native token.”

“I think the only way that the industry will mature is through compliant regulatory issuance of securities that will turn into non-securities over time, or through [traditional] funding, or through STOs.”

Where in the World…?

So for companies that are hoping to launch STOs or have an STO-based business model, wherein the world is the best place to establish themselves? “This is a question that always comes up,” Keinan said.

“As for the projects that I’ve been involved with in the STO space – each one had [its own] jurisdiction,” he continued.

“With an STO, it doesn’t work like that. The considerations are different.”

“First of all, we look at tax. We want to maximize tax savings. So, we’re looking at where the investors are coming from – if they are mostly from the states, then maybe just doing a simple LLC would be ok. If they are from other places – if they are mixed – then you might choose the Cayman Islands.”

Another thing that needs to be taken into consideration is where the company can open a bank account, “because there are still many jurisdictions [in which banks] would not accept money that is affiliated with crypto” in any way.

“So for example, there’s been some advancement with banks in Switzerland. Not that it’s easy – but they’re a bit more open than they were last year with bank accounts for crypto-related companies.”

“But you really have to examine [these things] on a case-to-case basis, because there’s no rationality to do a Cayman Island-based company for a purely US fund, for example.

This is an excerpt. To hear Finance Magnates’ full interview with Ziv Keinan, click here. To learn more about the Barcelona Trading Conferece where Ziv will host a panel on Security Tokens, click here.