While everyone is focusing on the current Bitcoin rally, the privacy focused cryptocurrency Dash has experienced amazing growth of its own. The DASH/USD exchange rate has shot up over 56% over last week alone, bringing the price to around $16 now and the overall market value to $112 million.

The CEO of one of the biggest server hosting providers for the network, Node40, and the Director of Finance at Dash told us about the reasons they see for the cryptocurrency’s breakout and its latest software update, Sentinel (12.1).

What do you attribute the overnight surge to?

While we are seeing increased interest from China, most of the speculation on the reasons for the surge seems to center around the announced release date for the next version of our software. The new version is the largest release in over a year, and will introduce a number of improvements, particularly for merchants. 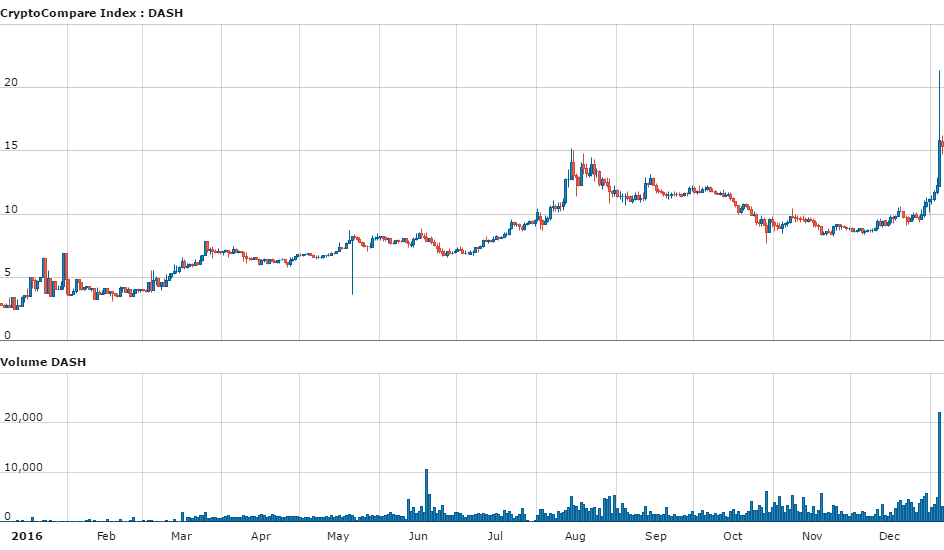 Most notably, we are introducing the first decentralized network interface, which enables developers to integrate a website, application, or register software directly with the network in an incredibly simple and secure way. The release also incorporates many other “under the hood” firsts for digital currencies, such as the first proof-of-service implementation and the first object-oriented governance system. The “under the hood” changes won’t immediately improve the user experience, but are foundational elements for our Evolution release later this year, which aims to make using cryptocurrency incredibly easy to use. We like to say that it should be so easy that your grandma could use it. Right now, the industry is a long way from that vision, but Dash is very focused on bringing that to reality.

In general, I think the market is recognizing that we are building on our proven track record of innovation and delivering yet another set of amazing technologies. By announcing that these technologies are robustly tested and ready for release, I think a higher valuation is justified. As we continue executing our strategy of making cryptocurrency easy to use for merchants and consumers, we believe the upward trajectory will continue.

Why do you expect this tremendous growth to continue?

The potential for growth is enormous. Within the world of cryptocurrency, Bitcoin seems like a Goliath. But in the broader payments industry, even Bitcoin is a tiny blip. By focusing on delivering a great user experience, we believe we can grow into that much larger market that traditional cryptocurrencies are inadequate to address. With the release of Evolution later this year, I think exponential growth is absolutely possible.

What initially sparked the software upgrade?

Our initial governance and self-funding system served as an amazing advantage for us throughout 2016, as our market cap grew 289%… much faster than the industry as a whole. However, as we set our sights higher and aim for mass adoption, we know we needed a system that can effectively scale. Sentinel is our answer, and lays the foundation for a scalable system with which we can adapt much more rapidly than before. In short, our next release lays the foundation for a highly-scalable, highly-flexible, and rapidly adaptable system that allows our development to accelerate rapidly.

We have some incredible partnerships in the pipeline that unfortunately are still pre-announcement. But you will begin to see partnerships with some of the largest players in the industry this year, and notable institutions becoming supporters of the project as well. Around the end of the year, our flagship effort Evolution is slated for release, which we believe will permanently transform the cryptocurrency user experience as profoundly as the web browser transformed the experience of the Internet.

One of the things I’m most excited about is the opening of our headquarters in Scottsdale, Arizona on February 1st. Our offices will be located in beautiful LEED-certified class A office space at SkySong – Arizona State University’s Innovation Center. I’m not aware of any other cryptocurrency with self-funded office space, so I believe that’s another industry first. We believe a professional working space for our team will bring enormous productivity, credibility, and value to the project.

What do you attribute Dash’s overnight surge to?

All of the top-tier cryptocurrencies are surging at the moment. With Bitcoin breaking records, we have the case of a rising tide lifting all boats. The past 48 hours has been impressive for Dash in part due to an official release schedule for Dash 12.1.x posted by Evan Duffield on Monday the 2nd. I also think the latest article by Brian Armstrong of Coinbase is contributing to the rise.  Here we have one of the best known CEOs in the space coming out and stating that Bitcoin is not going to fill the role of a day-to-day transactional currency. Armstrong sees Bitcoin as “the reserve currency of the digital currency space.” If this becomes the accepted position, then you are going to see Dash continue to grow. With the ongoing development of Dash Evolution, it is only a matter of time before others see the utility offered by Dash.

How does Node40 benefit from this surge?

The surge leads to increased exposure. Whenever there are breakouts like today, we see an influx in the number of signups at Node40 from people interested in learning more about Dash. From a practical perspective, a surge allows us to realize an upside profit. Most of our customers pay us in Dash and we hold for as long as possible before exchanging to US dollars. When we see a surge in price, it takes the burden off of paying our vendors.

Do you believe in the latest Dash update and why?

For most users, 12.1 may not look like a significant update. Some of Dash’s core features will be a bit more polished, but what’s important about 12.1 is it lays the foundation for Dash Evolution. Having spent a great deal of time working with 12.1 in a test environment, I am very impressed with the changes. It is really impressive how the core development team has used 12.1 to bridge the gap between what Dash is now and what it will become with Evolution.

Share this article
Tags: dash
Got a news tip? Let Us Know