The German Ifo Business Climate Release is a leading indicator of economic health – businesses react quickly to market conditions, and changes in their sentiment can be an early signal of future economic activity such as spending, hiring, and investment. The release on February 23 was anticipated to affect the EURUSD pair as well as correlated pairs such as the GBPUSD. Of the two, I preferred the GBPUSD because at the time it had a stronger resistance line to break. The actual release of 95.2 was below forecast of 96.2 which triggered a sell-off of the EURUSD and GBPUSD and broke through my breakout point as seen below: 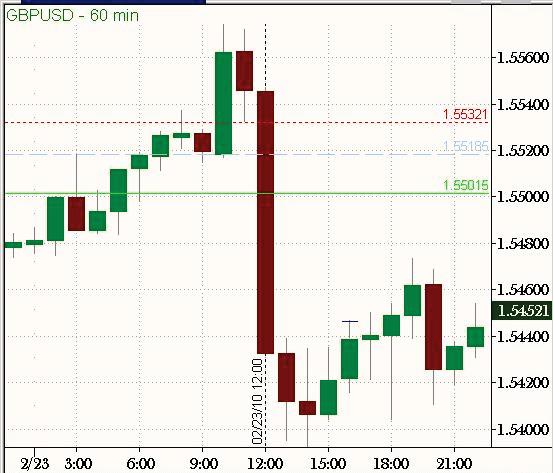 As soon as the breakout point, seen as the blue dashed line, was broken, i placed 3 trades in this order: A) Short the GBPUSD 10 mini lots (Value $100,000). B) Stop loss at the red dotted line (max loss capped at ~$140 dollars). C) Bought 2 GBPUSD Call Binary Options at www.startoptions.com. The binary option positions that I bought would have made a gain of $140 at my stop loss, should my GBPUSD breakout fail. This would offset my losses at the stop loss point. On the other hand, the success of the GBPUSD breakout would result also in a failure of my Binary Option hedge, so the breakout would have to continue past the green line, in order for the entire combination to be profitable.

So why go to all this trouble? My experience, and probably yours as well, has shown that strong event-related breakouts either win big or lose big. In other words, the loss-area between the blue and green lines in the image above, is the least likely to occur. If you agree, you should try this strategy for yourself.