Nowadays, as cryptocurrency is becoming more of a matter platform, many developers are pursuing the path of how to connect it to the real-world. We have entered a stage to re-evaluate the true role of “cryptocurrency.”

One such group that is spearheading the push for cryptocurrencies is KINGS, which operates as a virtual currency for the purpose of bringing cryptos into the mainstream. We asked Keiko Koguma, who oversees the KINGS GROUP Resort Development division about the business and future strategy around the Token.

Ms. Koguma now lives in Dubai, after having worked at Resort Trust Inc., a resort membership sales company listed on the Tokyo Stock Exchange. She has deep knowledge on global resorts and the upper-class market.

“However, a token is just one potential method of payment, so what is more important is the quality of the resort itself, its rarity, and added value to it.  With the current cryptocurrency trend, people forget that it is a tool and make investments without fully understanding the service and what it actually is. I think the system is going to collapse when all the hype dies down.

“Especially with the upcoming major events in Asia, starting with the Tokyo Olympics in 2020, Dubai Exposition, and developments of large marinas in many countries, we can expect to see an increasing flow of people and money.  KINGS is making detailed observations on that flow of money and the upper class.”

“In order to use cryptocurrency as a form of payment in the real world, you need to resolve some of the problems that the current cryptocurrency has. In a large sense these problems could be categorized as “technological” or “environmental”, but we are already designing every process to achieve our goals. First let me explain the solutions we have planned for the technological problems, she explained”

Transaction speed is the metric at which cryptocurrency is processed. For example, with Bitcoin, only 7 transactions could be processed in 1 second, so it would take at least 10 minutes for the whole entire process. When you pay with a credit card, it would never take that long, would it?

This is actually one of the reasons why cryptocurrency cannot be used for payment in the real world.  But our tokens will have a faster transaction speed using Ethereum and off-chain technology, building a blockchain fast enough to be comparable to the VISA network used with credit cards. As a result, KINGS can maintain stable transaction speed and avoid crossed wires.

First in the world! Issuing non-contact IC Cards along with development of Hard Wallets

When there is no internet connection, such as on airplanes and boats, this state is referred to as being “offline”, but what’s the point if you cannot make payments in that environment?

KINGS is aiming to go completely cashless and is designing a system that could work in offline environments by matching Plasma’s step off-chain technology and IC technology to build a structure in which settlements could be made on and offline.

“First let’s talk about hard wallets—they are officially called hardware wallets, and they are the “wallets” used to safely store cryptocurrency offline. With the recent outflow incident with Coincheck, everyone rushed to buy one, with the hard wallet called Ledger Nano S being especially popular,” noted Ms. Koguma. 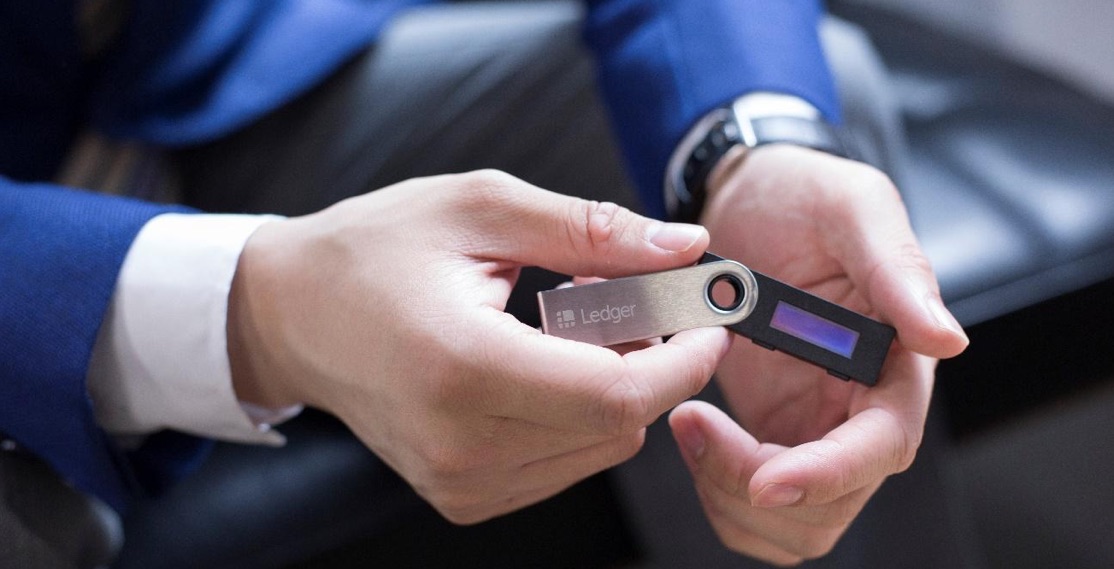 “Due to its structure, the Ledger Nano S has a limited capacity of data it can hold; it can only store a maximum of about 20 types of cryptocurrency.  But with KINGS, we have made a design to be able to store an unlimited amount of cryptocurrency and tokens, so you can store all the cryptocurrency in the world.”

“Next with the IC Card, KINGS will be the first to design a system where cryptocurrency and tokens could be charged to an IC Card. This is made possible thanks to Mr. Tamaki, a KINGS project member and former employee of Felica Pocket Marketing, who holds the intellectual property. You will also be able to charge cryptocurrency and tokens to your PASMO or Suica through our KINGS system without creating a KINGS IC Card.”

“As you know, these IC Cards have the highest level of security, making it possible to create a cashless world even in offline environments like airplanes and boats, as well as serve as a trusted hard wallet to manage your cryptocurrency and tokens.”

“With regard to the API interlock with POS and existing registers, I am hoping to explain more about it with the world expansion of POS registers, but to say a few words here, the cards will have no meaning if they cannot be used anywhere, so we are planning to develop a settlement terminal and expand it globally.”

The KINGS Project aims to not only create the KINGS IC Card but also be the first to globally introduce a settlement terminal that accepts KINGS, through a strategic partnership with TiENPAY (Hong Kong).

The group is also in discussions to partner with China’s largest settlement terminal company, and through these partnerships KINGS aims to secure the means to make use of the KINGS IC Card from multiple angles. 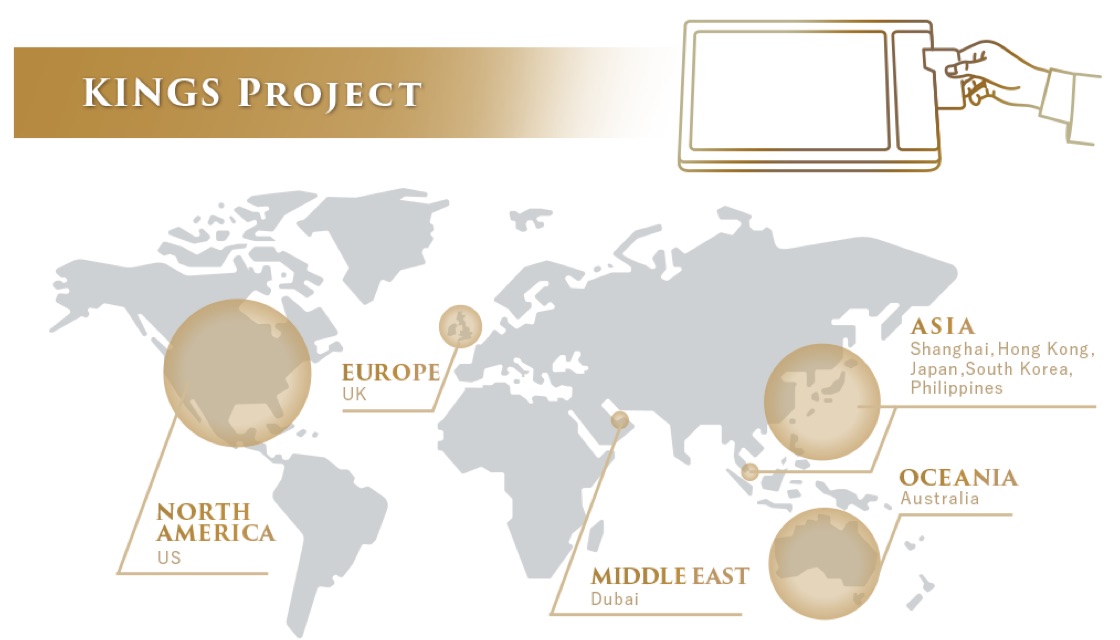 Further, KINGS plans to add to the settlement terminal an IC Card settlement function and build an ecosystem that allows payment in any environment in the world, including offline settings.

Implementation of the cryptocurrency “KINGS-PEG System”, a system with zero volatility risk

One of the factors that prevents the use of cryptocurrency as a means of payment in the real world is “volatility risk”.  Volatility signifies the change in profit. For example, let’s say that you sell an apple at 300 KING each at 9am when the store opened based on the value of 1 yen being 1 KING at the time.

To reduce volatility risk, KINGS will provide a platform where open sourced peg coins could be produced. With this, companies could make cryptocurrency and tokens that are volatility-risk-free free of charge. KINGS call this project “KINGS-PEG” and will work to build a system towards a cashless world, with merits for both companies and users.

Creating solutions to the environmental problems that cryptocurrency faces

Given a litany of technological problems, it will be even more convenient with further progress on existing IC Cards and credit cards, however legal issues will also have an implication on this.

According to Ms. Koguma, “Definitely, and this is exactly what we consider as “environment problems”. Cryptocurrency can become a settlement infrastructure in the real world for the first time if and when the environmental and technological problems are both resolved.  Here, I will explain the solutions for the “environmental problems” that cryptocurrency faces today.”

“As you may know, the regulations on cryptocurrency in each country from the standpoint of money laundering prevention and investor protection are growing stricter every day. At KINGS, we aim to build a problem-free settlement structure by establishing branches or business partners in each country where we plan to expand in, in order to acquire necessary approvals.” 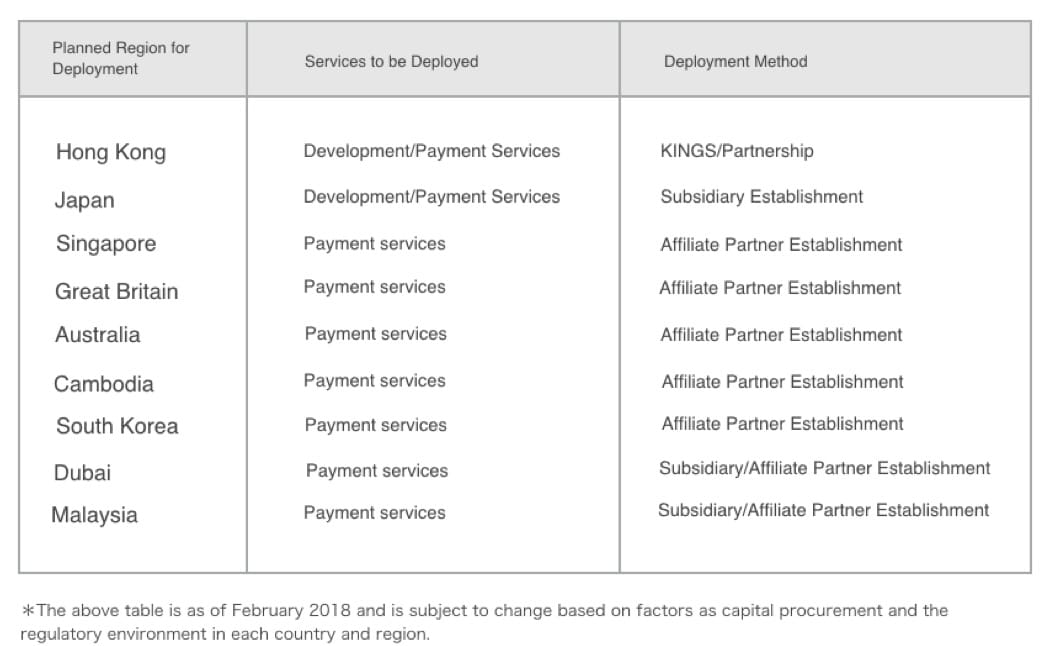 In February 2018, KINGS began selling acquisition share options for the KING token, and in parallel have been developing the KING token at a base of ERC20. The project is expected to be listed in October. Because the cryptocurrency environment is constantly changing, with regulations and customary laws in each country growing stricter, KINGS may face some delays in the schedule, but we are steadily moving forward.

KINGS will be announcing future prospects on its website and through Telegram.

You can find our latest information on the below Telegram.

It is a discussion group on KINGS.