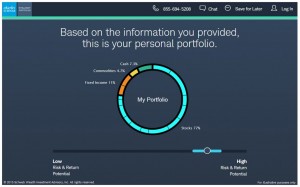 With the launch of Schwab Intelligent Portfolio yesterday, Charles Schwab entered the hot robo-advisory sector. In the US, the field is led by Wealthfront which announced they had reached $2 billion in assets under management as well as other players including Betterment and Hedgeable.

Robo advisory has gotten positive attention for the belief that its use of technology is able to provide improved long-term investing performance over that of professional financial portfolio advisors, with reduced costs. Specifically millennials have become a target market for the product as it offers users a simplified, yet powerful, approach to investing for the future.

Entering the market, Charles Schwab immediately becomes a force to be reckoned with due to their existing name brand and leading position within the overall US financial industry. The firm also launched Schwab Intelligent Portfolio promoting no fees for the service. (However, as the product invests in ETFs that Schwab manages, the firm does collect management fees from those ETFs.)

The launch has led to competitors going public with remarks that Charles Schwab’s product isn’t as cheap as they state it is, and inferior to other robo-advisory offerings already on the market. Specifically, one of the chief criticisms is the product’s use of cash which, according to client documents, receives 6% to 30% of customer funds allocation. The caveat is that cash holdings are swept into Schwab Bank. As bank deposits, they become available for lending which Schwab earns revenues from.

Among the first to challenge Schwab Intelligent Portfolio was Hedgeable, who posted in February about several of the hidden fees involved with the product. In their review, Hedgeable did commend Charles Schwab for using a more diversified asset allocation approach than some other robo-advisory products on the market such as with metals and REITs. However, Hedgeable didn’t believe the percentage allocations in more exotic asset classes was enough to make much of an impact for investors.

In regards to cash, Hedgeable stated that they were in favor of having a cash allocation. Nonetheless, they believed that Schwab’s algorithms were biased to allocate too much of the portfolio in cash, of which Schwab was set to realize additional revenues from Schwab Bank. In their estimates, despite not charging fees, due to revenues from bank deposits and collection of management fees from ETFs, Schwab is set to realize compensation of around 1% on assets being managed. This compares to 0.25% to 0.75% from competitors. Nonetheless, according to Hedgeable, the bias to over-allocate in cash means a lost opportunity for improved performance, which will lead Schwab Portfolio Investors to underperform competitors over the long term.

Taking a more personal approach to Schwab’s offering was Adam Nash, CEO of Wealthfront, who posted his views on an essay titled “Broken Values & Bottom Lines” on Medium. His post was interesting since, at conferences where Nash appeared as a speaker in the past, he has related personal encounters with Charles Schwab (the person) and how Schwab viewed Wealthfront as bringing financial benefits to customers in the same way his firm did when it launched in the 1970s. 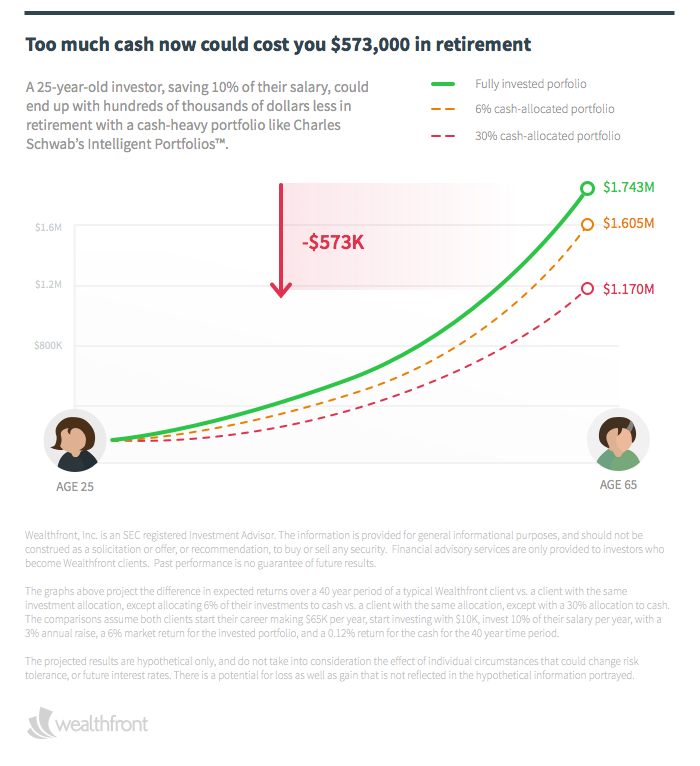 In the essay, Nash criticized Charles Schwab for not putting its customers’ interests first. He pointed out that this is apparent from the over-allocation into cash, which converts into the above mentioned revenues from Schwab Bank. Nash also presented research from Wealthfront which depicted the lost profit potential of over-allocating into cash.

In addition, Nash criticized the “Smart Beta” ETFs which are being used for the portfolio allocation. According to Nash, the ETFs were chosen as Schwab collects higher fees from them compared to similar products.

For its part, Schwab has addressed several of the complaints being put forth against Schwab Intelligent Portfolio. In regards to the cash allocation,the firm has a policy of recommending investors to allocate a percentage of their portfolios in cash, with a similar model being employed by the robo-advisory product.

In addition, the firm released a response to Nash, addressing many of his points against them. Among them include rebuffing Nash’s opinion that their ETF’s are expensive compared to the competition as well as expressing that the cash allocation examples Nash used were out of proportion. 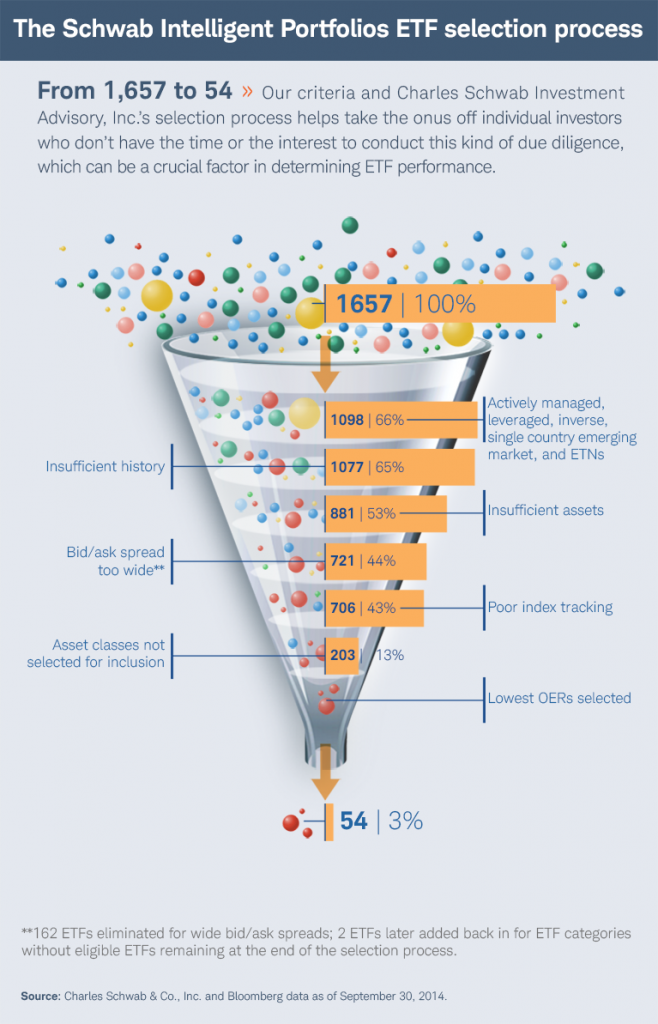 In regards to the ETF fees, a Schwab representative referred Forex Magnates to their selection process.  The process filters from over 1600 ETFs to 54 with a focus on a product’s overall expense ratio (OER), which range from 0.04% to 0.44%.

Leading up the robo advisor launch, Schwab management had also expressed that they  believe that as a 40 year old company with trillions of dollars under management, Schwab provides a comfort level in terms of safety of funds when compared to competitors. Overall, the proof is in the pudding, and with the product now live, we should soon see how real live accounts perform against the competition.

(Update: The article was updated to include recent responses from Charles Schwab)

Share this article
Tags: Robo-advisory / wealthfront
Got a news tip? Let Us Know