Thomson Reuters (NYSE:TRI) disclosed its FX trading volumes for April 2016, which rebounded slightly, avoiding a consecutive monthly decline after a disappointing March release, according to a Thomson Reuters statement.

Looking at the latest figures, Thomson Reuters saw a total average daily volume (ADV) of its foreign exchange (FX) products, including spot, forwards, swaps options and non-deliverable forwards (NDF), come in at $373 billion, which was higher by a factor of 3.0% MoM from $362 billion in March 2016. The figure was also slightly more upbeat when weighed against April 2015, as it was higher by 1.1% YoY from $369 billion.

Breaking down April’s total $373 billion of ADV, $97 billion was FX spot volume compared to $276 billion for other products. Monthly spot FX volume fell for a third consecutive month, this time declining by -6.7% lower MoM from $104 million in March 2016 – by extension, all other products’ volume at Thomson Reuters in April 2016 climbed 7.0% MoM from $258 billion in the month prior.

Thomson Reuters made headlines late last month after it also reported its Q1 2016 operating figures – these were mostly lower across the board relative to the same figures for 2015, however the one saving grace was an influx of cash flow from its operations, which secured a virtual groundswell in 2016. 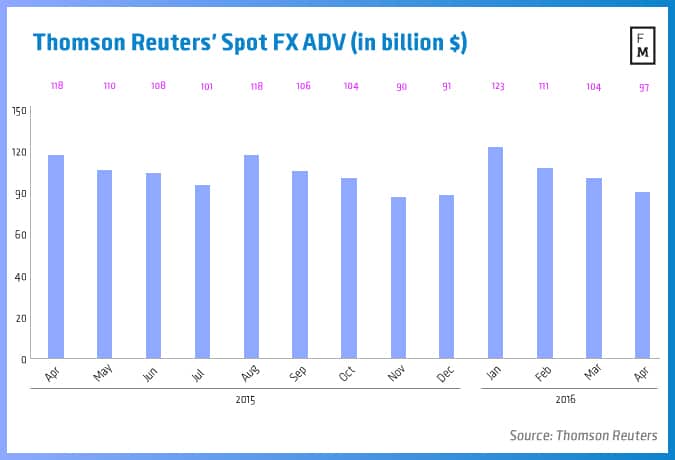