Thomson Reuters (NYSE:TRI) has reported its Q1 2016 operating figures, which were generally lower across the board relative to the same figures for 2015 – the one saving grace was an influx of cash flow from its operations, which secured a virtual groundswell in 2016, according to a Thomson Reuters statement.

Continuing with this trend, Thomson Reuter’s earnings per share (EPS) on a diluted basis were also firmly pointed lower in Q1 2016, crumbling to just $0.26 from $0.33 in Q1 2015, representative of a -21.0% YoY decline. The group’s decreases in operating profit and diluted EPS were primarily reflective of adverse fair value adjustments associated with foreign currency embedded derivatives across select customer contracts.

A Tale of Two Financials

Another area that saw improvement during Q1 2016 was the adjusted EBITDA figure, inching higher to $748.0 million in Q1 2016, up 2.0% YoY from $734.0 million in Q1 2015. Overall, EBITDA figures, as well as Thomson Reuters’ EBITDA margin during the quarter (26.8%) were helped by savings related to efficiency initiatives and platform closures completed in 2015. 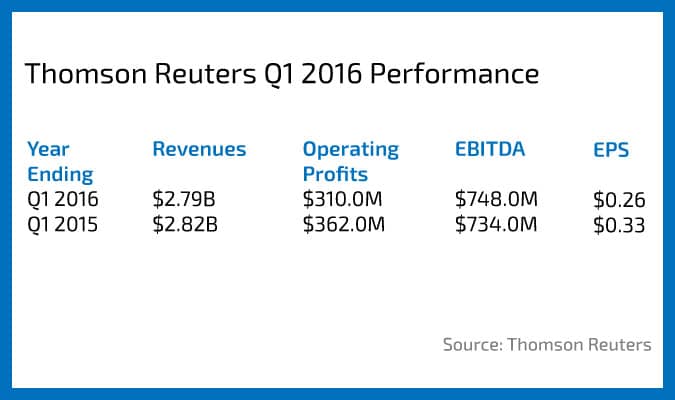 Share this article
Tags: Thomson Reuters
Got a news tip? Let Us Know