ICAP has just reported its latest tranche of statistics that covered its electronic foreign exchange (FX) platform EBS during July 2016 – just one month after the unexpected Brexit fallout, the exchange showed a strong pullback, bringing its volumes more in line with averages seen during H1 2016, according to an ICAP statement.

EBS’ June 2016 FX volumes were something of an anomaly, given that it included a period of extreme volatility instigated from the Brexit vote and consequent aftermath, which resulted in a staunch uptick in uncertainty and currency markets. This ran counter to the prevailing trend during Q2 2016, which saw continuous declines across the board.

With the Brexit hoopla now in the rear view mirror and markets once again showing signs of low volatility, reinforced by the summer months as well, July 2016’s volumes on EBS were lower MoM. In particular, the latest EBS’ FX volumes were reported at $83.0 billion daily, retreating by a margin of -14.8% MoM from $97.4 billion in June 2016 – these latest figures are also lower than EBS’ Q2 average of $85.1 billion despite being its largest performance since March (excluding last month)/

Additionally, EBS’ latest figures are roughly in line with those of 2015, signifying a growth of less than 1.0% YoY from $82.3 billion in July 2015. The results are largely in line with other exchanges, each of which has seen its volumes fall back to earth in July after a parabolic June. 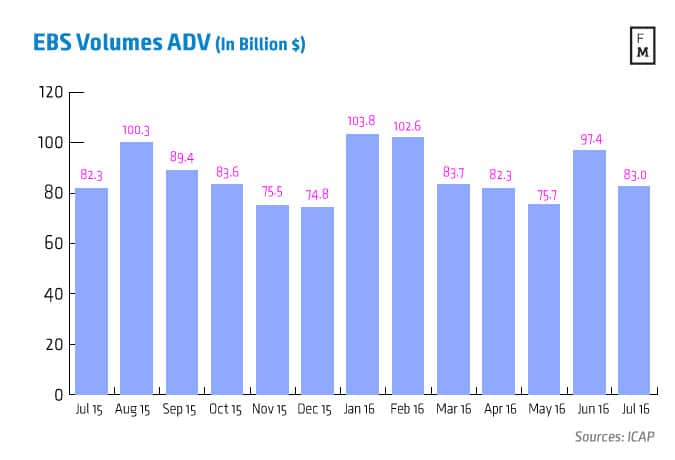