ICAP has released its trading volumes that encompassed its electronic foreign exchange (FX) platform EBS for the month ending June 2016. The exchange showed strong growth, snapping out of a recent downward consolidation that had lasted for the past four months, according to an ICAP statement.

EBS’ June 2016 FX volumes had been pointed lower since January 2016, though have now rebounded strongly, helped in large part by a boost in volatility induced by the Brexit vote at the end of last month. During June 2016, EBS’ FX volumes were disclosed at $97.4 billion daily, storming higher by a factor of 28.7% MoM from $75.7 billion in May 2016 – these latest figures are the highest since February which constituted a yearly peak of $102.6 billion.

While the rebound has been rather strong and abrupt, EBS’s latest figures are slightly lower by a factor of -3.0% YoY from $100.8 billion in June 2015. Most exchanges received a welcome boost in volumes during June, as reinforced by a shakeup in the FX market. With the surprise Brexit finality not priced in, markets reacted sharply, causing an influx of trading in the latter stages of the month. 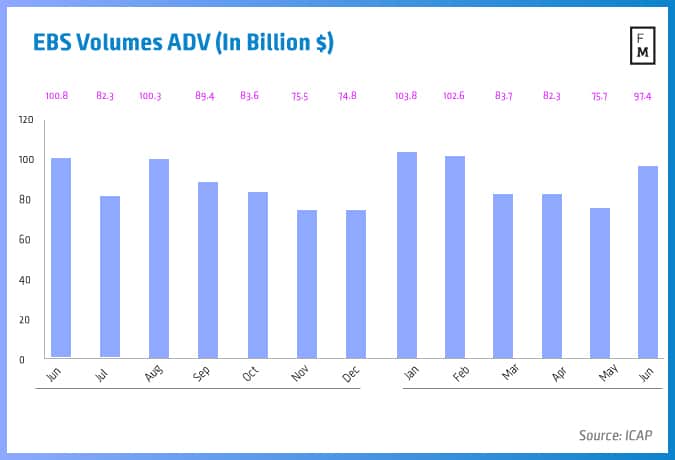