Analysts from Bernstein Research state that European investment banks and US brokers are in general still undercapitalized, despite 6 years of spending aimed at remedying the situation.

According to the analysts, Deutsche Bank’s tangible equity is just 2.7% of its tangible assets. This is when we exclude the deferred tax assets. The only bank that has it worse is Credit Agricole with 2.3%. A little better is Credit Suisse with 3.0%. Standard Chartered looks good for now (7.3%) but it’s being heavily pushed by the markets that bank with commodity exposure.

At the same time we have the French banks like SocGen and BNP Paribas, who are also undercapitalized but seem to be protected by regulatory backing from the French government. 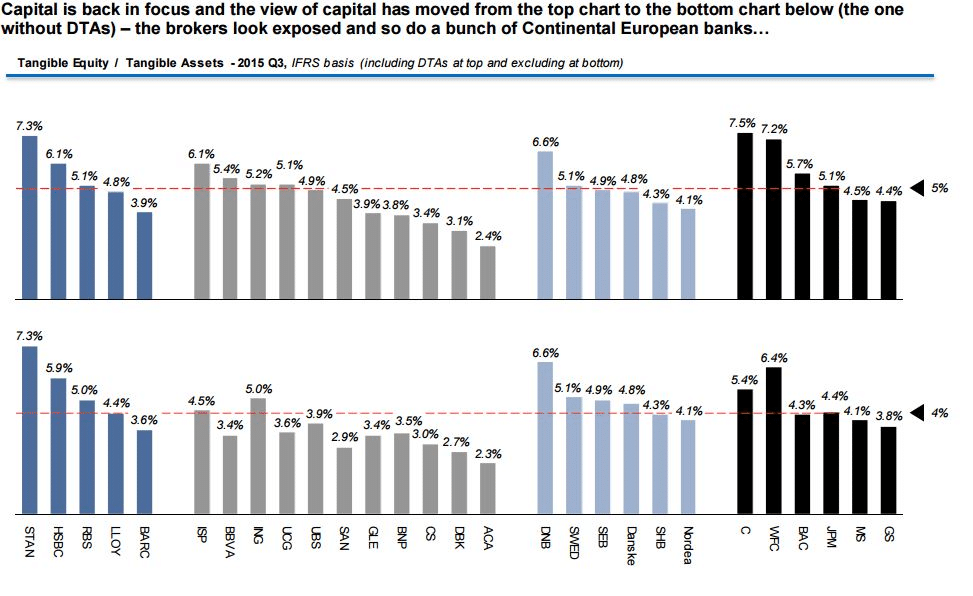 It would be very undesirable for banks if credit default swaps, which are the price of insuring against defaults on principal payments, indicate worse performances than before. The last time that something like this happened was during the global financial crisis, when investment banking revenues went down by 40% and more.

This increase in spreads usually leads to more risk off signals to earnings and even higher spreads. Markets are generally right about the state of the world economy and thus there is the possibility that investment banking revenues could fall 20-30% in 2016. And as spreads continue to blow, banks will find it even harder to increase their capital ratios, with the de-leveraging and dumping of risk weighted assets. And in this scenario, capital continues to be a problem to deal with.

Banking in the eurozone has become something like a fixed cost business, due to all the regulations related to compensation, while at the same time having the most unstable income.

If revenues in investment banking really fall by 20-30% in 2016, there will be no choice left except to cut staff which will damage their franchises in the future.