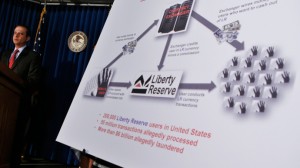 As part of the story that received wide coverage and shocked FX traders who relied heavily on the 3rd party provider of payments, Liberty Reserve and the aftermath that followed its collapse draws closer to an end.

The U.S. Department of Justice (DOJ) announced that one of Liberty Reserve’s co-founders, Vladimir Kats of Brooklyn, New York, pleaded guilty yesterday in the federal court before U.S. District Judge Denise L. Cote, to money laundering and operating an unlicensed money transmitting business, in relation to his role in operating and co-founding Liberty Reserve and allegedly laundering more than $6 billion in suspected proceeds from crimes.

The charges included 5 counts carrying a combined maximum 75 years in prison according to the DOJ press release. A sentencing has not yet been scheduled according to the announcement. This follows the arrest of Kats’ co-conspirer in the scheme, Arthur Budovsky Belanchuk, the CEO of Liberty Reserve, who has numerous aliases according to court documents, and who was arrested in Spain on Friday May 24, 2013, following the seizure of the company’s operations.

Despite its use as a conduit for criminals seeking to launder proceeds from their hideous activities, Liberty Reserve also served the needs of legitimate businesses including the needs of traders, investors and foreign exchange brokerages. This case being a stark reminder of the importance in choosing a reputable 3rd party payments provider, and a reminder of the risks in dealing with 3rd party payment providers in day-to-day personal and business transactions, as in the case of default where there is credit-risk.

With regards to Liberty Reserve, many Forex Brokers who had accounts with the ill-fated provider suffered 100% losses (of any funds held through Liberty Reserve) and several brokerages passed these losses to customers, according to Forex Magnates’ research (while some of the brokerages also absorbed the Liberty Reserve-related losses on good faith rather than pass to clients).

Nonetheless, choosing a payment provider is critical. This includes understanding the structure, technology, reputation, financial risk and regulatory licensing behind such companies. Payment Magnates provides detailed insight into this booming field of payment providers, as technology drives new innovations such as the latest Bitcoin bonanza.

According to the indictment, before being shut down by the government in May 2013, Liberty Reserve had more than one million users worldwide, including more than 200,000 users in the United States who conducted approximately 55 million transactions through its system, and allegedly laundered more than $6 billion in suspected proceeds of crimes, including credit card fraud, identity theft, investment fraud, computer hacking, child pornography and narcotics trafficking. Kats co-founded Liberty Reserve and helped operate the company until 2009, according to the press release from the DOJ.

“Vladimir Kats, by his own admission, helped to create and operate an anonymous digital currency system that provided cybercriminals and others with the means to launder criminal proceeds on an unprecedented scale,” said Acting Assistant Attorney General Mythili Raman as part of the official press release. “His conviction reinforces what we said when Liberty Reserve was first brought down: banking systems that allow criminals to conduct illegal transactions anonymously will not be allowed to stand, and professional money launderers will be brought to justice.”

U.S. Attorney Preet Bharara, commenting in the official press release concerning the case said, “As a co-founder and operator of Liberty Reserve, Vladimir Kats served as a global banker for criminals, giving them an anonymous, online forum to hide the proceeds of their illegal and dangerous activities.” Mr. Bharara concluded in the official statement,“With his guilty plea today, we take a significant step toward punishing those responsible for creating and running this international den of cybercrime.”

This case is being jointly prosecuted  by the Criminal Division’s Asset Forfeiture and Money Laundering Section (AFMLS) and the U.S. Attorney’s Office’s Complex Frauds Unit and Asset Forfeiture Unit in the Southern District of New York, with assistance from the Criminal Division’s Office of International Affairs and Computer Crime and Intellectual Property Section, as per the announcement.


The number of attorneys involved was also significant, including trial attorney Kevin Mosley of AFMLS and assistant U.S. attorneys Serrin Turner and Andrew Goldstein of the Southern District of New York who are in charge of the prosecution, and assistant U.S. attorney Christine Magdo in charge of the forfeiture aspects of the case, according to the details from the DOJ.

Kats was arrested in Brooklyn in May 2013, before pleading guilty yesterday to the charges before the federal court judge in NY. The global aspects of this case are being investigated by four major US governmental agencies, and in cooperation and with the assistance from governmental agencies in Costa Rica, Netherlands, Spain, Sweden and Switzerland. A full copy of the DOJ press release can be found on its governmental website.

Thankfully a much better alternative, BitCoin, has come along. The gov’t can go after the actual criminals and leave the rest of the ‘payment system’ alone.

With the LR demise, the entire payment system was taken offline….a lot of legitimate operations got shafted in the progress.