The summer was a dry period for the American retail FX trading industry, as shown by the recently released monthly report by the Commodity Futures Trading Commission’s (CFTC). According to the latest data filed by US Futures Commission Merchants (FCMs) and Retail Foreign Exchange Dealers (RFEDs), firms’ retail forex funds suffered a decline in August 2015.

For the month ending August, total retail FX obligation went down by 7.4% MoM from July 2015. Moreover, each and every broker has reported a decrease in the amounts of FX funds they held over the move. This is especially worrisome for the American industry as the markets saw higher volatility in August compared with July.

As can be seen from the chart, the worse performance was by Interactive Brokers whose retail FX funds crashed about 21% in August 2015 month-over-month. While smaller players also suffered losses above 10%, FXCM, GAIN Capital and OANDA losses remained in single digits territory.

As the whole market went down across the board, the relative strength of the companies active in the US market remained similar to previous months. FXCM maintained its leading position, followed by GAIN Capital and OANDA coming in at third place. Despite its bigger losses, even Interactive Brokers was still capable of staying above IBFX in terms of market share. 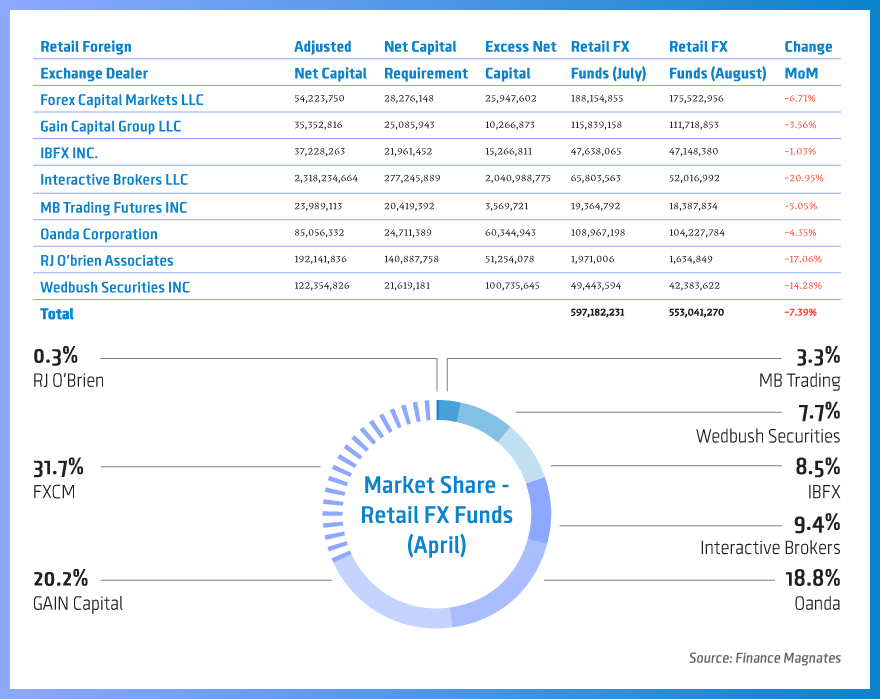