2018 was a tough year for brokers with the implementation of the European Securities and Markets Authority’s (ESMA) product intervention measures. As a result, many brokers and trading providers reported a dip in earnings and revenue. One broker, however, has managed to go against this trend – Trading 212 UK.

The London-based brokerage, which filed its financial statement through Companies House, has reported a solid financial performance for its UK-based operations for the year ended December 31, 2018. In fact, not only were profits and income solid – they managed to actually increase on a year-on-year comparison.

Speaking to Finance Magnates on the results, Ivan Ashminov, the Co-Founder of Trading 212 said: “Our obsession to provide the best possible customer experience in our mobile and web apps is the big differentiator for Trading 212. We continue to be the most downloaded and the highest rated mobile app in the UK for trading and investing.”

Although Trading 212 UK did note an annual decline in revenue for the 12-month period, the result for the broker was still a strong result given the circumstances, coming in at £4.03 million ($4.99 million). Against the previous year, it is lower by 3.5 percent.

Operating profit, however, saw a 49.3 percent year-on-year growth from the previous financial year, with the broker recording a figure of £1.85 million. This is up from the £1.24 million achieved in 2017.

In 2018, Trading 212 managed to significantly reduce its expenses, which helped the firm achieve solid growth in profit. Specifically, total expenses were £2.18 million. When comparing this with the £4.6 million of expenses recorded in 2017, it is lower by 52.7 percent.

Trading 212 UK’s results are even more impressive when you take into account the makeup of the broker’s client base. According to the filing, its clients are mostly based in the UK or Germany, two countries which were both affected by ESMA’s measures, which included leverage restrictions. Furthermore, the company states that 95 percent of its clients are classified as retail.

Nonetheless, the broker did see a drop in the number of total funded accounts, as can be seen in the graph below. 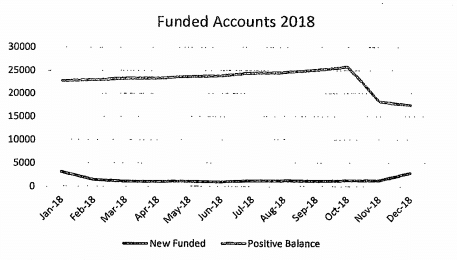 When asked about the future financial performance of Trading 212, Ashminov had this to say: “In 2019 our revenue will be significantly lower due to ESMA’s restrictions. However, we are seeing a dramatic improvement in client retention, record levels of new account openings and engagement metrics and in general a significant organic growth of the business.”