Every month I’ll be preparing a report with a volume survey of as many retail forex brokers as possible. The report I released in May estimated the total daily volume at over $105B. June’s report estimates it at $128B, the increase is mainly due to several more brokers being added to the list.

The largest retail Forex broker, as you probably already know, is FXCM with Oanda coming in second. It looks like FXCM’s world Forex domination is all but complete and all that is left for others is the competition for 2nd and 3rd places. Good luck Oanda, Gaitame, Gain, Saxo and GFT.

Several major differences from the previous survey: Oanda was upgraded to reflect its volume more accurately (though their exact numbers are very hard to find), Gaitame the leading Japanese firm was added and FXOpen a leader in Middle East and Asia was added as well. Avafx was downgraded to reflect its known volume and Easy Forex was added.

The numbers were officially, and to some extent unofficially, released by the brokers themselves or are educated estimations based on industry rumored figures: 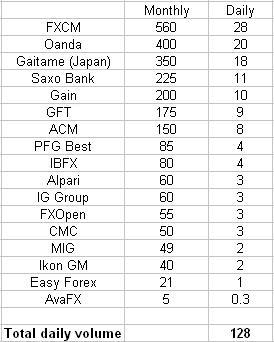 The figures are incomplete as some brokers such as FXDD, FX Solutions and CMS simply don’t report or disclose their numbers.