Japan’s Monex Group has reported its business metrics for the month ending October 2015, showing a major drop in its FX volumes for a second month. The monthly trading value for all subsidiaries of Monex Group Inc totaled just $28.2 billion in October, down about 27% from $38.6 billion in September 2015 which also was a decline from August’s figure.

October’s FX volumes are by far the lowest this year for Monex during what was already a weak period for the Japanese broker. Looking at the latest FX trading volumes figure on a year-over-year comparison shows just how the disappointing the results are, the figure is down over 46% from October 2014’s $52.4 billion.

Breaking down the figures, the monthly crash can only be explained by a drop in the average amount of trading Monex’s clients are interested in. The number of trading days in October 2015 was 21, while September only had 19 full business days in Japan. The number of  OTC FX accounts increased from 216,052 to 217,235 and the number of active OTC FX accounts was down ever so slightly from 63,467 to 63,322 – not enough to say that a smaller number of active clients was a contributing factor to Monex’s October’s decline.

In line with the FX trading volumes, the Daily Average Revenue Trades (DARTs) for the Monex Group were also disappointing in October 2015, down about 11.7% MoM from 313,592 to just 276,879. The group also reported that its American subsidiary, TradeStation, experienced a monthly decline in DARTs in October, from 130,460 to 119,225. Once again the number of active accounts can not explain the decline as the figure increased from 67,419 to 67,883 for TradeStation. 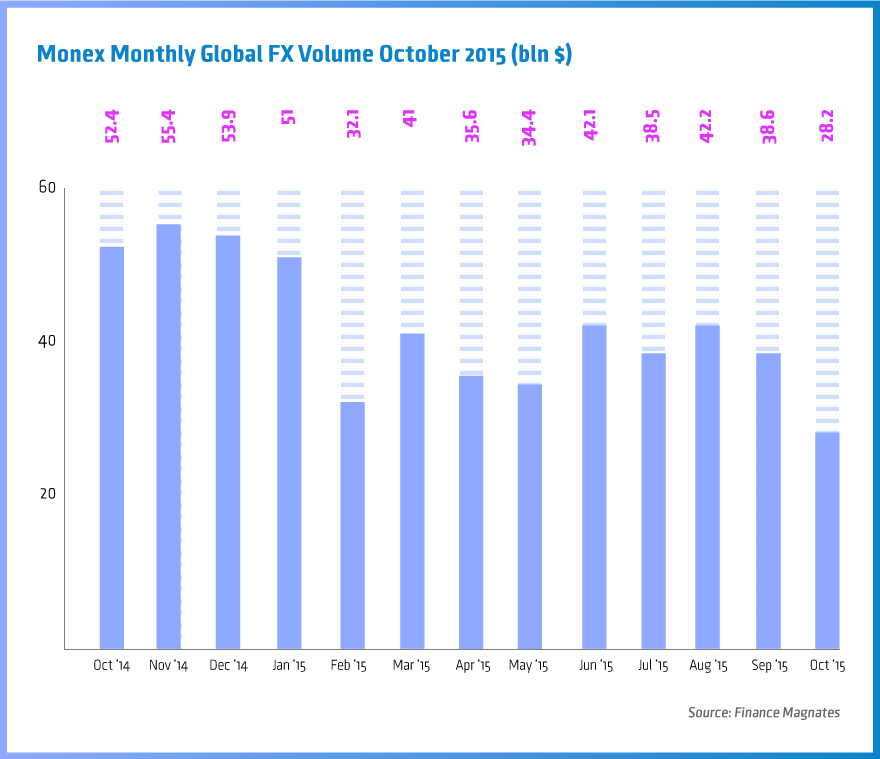