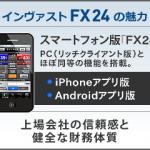 Japanese Broker Invast Securities released its Q3 and Fiscal Year ending March 2013 results. Over 2012, the broker has been widely marketing its Mirror Trading through its FX24/ST24 divisions with total copy trading accounts growing to over 30,000. As a result, the broker which had predominately been known for its Click 365 FX Futures trading franchise is seeing larger contributions from OTC FX. During the year, Invast was an active acquirer as it purchased the Click 365/OTC FX businesses of Mita Securities and Startkawase Securities. In addition to the financial figures, Invast Securities also announced that they are in the process of establishing a regulated Australian subsidiary which is expected to be launched during this month.

Other financials include a greater proportion of revenue based on Trading Income versus commissions. For the year, trading income accounted for 70.9% of income even though OTC account deposits remain well below Click 365 figures. Due to the higher margins in OTC trading, Japanese brokers have been marketing the product more than Click 365 commission based FX Futures.