Online trading provider IG Group Holdings plc has published its revenue figures for the first quarter of its 2020 fiscal year. Looking at the results, it appears that the company is starting to recover from ESMA’s regulatory measures.

IG Group’s 2020 fiscal year ends on May 31, 2020, and the first quarter of the fiscal year is the three months to August 31, 2019. Revenues during this period were particularly supported by favorable market conditions in August, as well as a growth in the number of active clients and increased client trading activity during the quarter.

During the first quarter of 2020, revenue for the Group was £129.1 million. This is in line with the previous year’s result of £128.9 million. Contributing the most to revenues was over-the-counter (OTC) leveraged derivatives, which raked in revenue of £124.0 million, slightly up from the £123.8 million reported in Q1 of fiscal 2019.

In the first quarter of fiscal 2019, the ESMA product intervention measures relating to CFD restrictions impacted just one month. To give a more accurate impression of how IG is recovering from ESMA’s measures, the UK-based company has provided an average revenue for the last three-quarters of the 2019 fiscal period, Q2 to Q4.

When measuring the revenue of the first quarter of fiscal 2020 (£129.1 million) against the average revenue achieved between the last three quarters of 2019 (£116.0 million), Q1’s revenue has increased by 11 percent.

According to the statement released today, this period growth is: “demonstrating the Company’s ability to deliver revenue growth in a more restrictive regulatory environment.”

IG is on track to meet targets

Previously, IG Group set out its targets for revenue growth of three to five percent growth per annum over the medium term in its core markets – OTC leveraged derivatives and stock trading and investments, as well as an increase of £100 million in revenue from the significant opportunities to around £160 million in its 2022 financial year.

In the first quarter, revenue in the company’s core markets was £109.2 million, which is higher than the average of £100.5 million per quarter in the Q2-Q4 FY19 period, which represents an uptick of nine percent.

“The driver for sustainable revenue growth in OTC leveraged derivatives over the medium and long term is growth in the size and quality of the client base, and the number of OTC leveraged active clients in the core markets in Q1 FY20 was 5% higher than in the average of Q2-Q4 FY19,” the statement said. 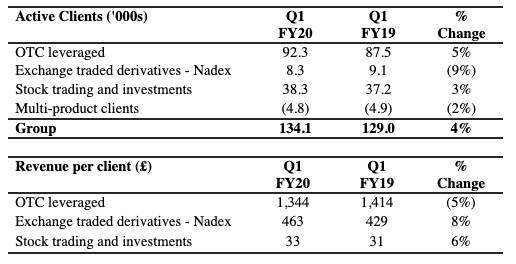 At the same time, IG Group reminded today that Andy Green would step down as Chairman at the conclusion of the Company’s annual general meeting (AGM). As Finance Magnates reported, the trading firm revealed Green would be leaving back in April.

As previously announced, Malcolm Le May is leading the search for the new chairman. At present, the company does have a preferred candidate; however, the appointment is still awaiting regulatory approval. The statement does not disclose who is the front runner for the position.

In the meantime, non-executive director and Chairman of the Board Risk Committee, Jonathan Moulds, will be appointed as Interim Chairman immediately following the AGM.

Following the AGM, the Board has also agreed to appoint Malcolm Le May as Chairman of the Nomination Committee.

After the conclusion of the AGM, Andrew Didham will also join the UK firm as a non-executive director, where he will join the IG Group Board Audit Committee.

Commenting on the search for the new Chairman and the interim appointment of Jonathan Moulds, Senior Independent Director Malcolm Le May said: “Following an extensive, externally facilitated process we are at an advanced stage of our search for a new Chairman to lead the Board.  Whilst we finalise the appointment, my thanks go to Jonathan Moulds for agreeing to take the role on an interim basis.”

“I am also delighted to welcome Andrew Didham to the Board. He is a highly experienced Non-Executive Director with significant financial services experience and will complement the range of skills of existing Board members, especially as a member of the Audit Committee.”