IG Group has published its preliminary financial results for its fiscal 2019 year, ended on May 31st, 2019, this Tuesday. Despite a reduction across the majority of the firm’s key metrics, the Group remains positive that it will return to growth in its 2020 fiscal year.

The product intervention measures implemented by the European Securities and Markets Authority (ESMA) hurt a lot of brokers operating in the United Kingdom and Europe, and IG was no exception. In fact, the online trading provider attributes almost all of its declining figures to ESMA.

ESMA’s measures, coupled with lower levels of market volatility and financial market activity throughout the majority of fiscal 2019 dragged down the firm’s net revenues across all geographic segments.

During the year, IG did manage to reduce its total operating costs by 2 percent year-on-year, coming in at £284.3 million in 2019.

Over-the-counter (OTC) leveraged derivatives contributed to 95 percent of IG Group’s revenues during the year. This segment noted revenue of £454.2 million, 17 percent lower than in the prior year. The number of active OTC leveraged clients fell by 10 percent, and the average revenue per client was down by 8 percent.

According to the report, from the OTC leverage revenue, 55 percent of it was generated from clients who have been trading with the UK-based firm for more than three years.

Equity indices and single name equities generated the largest revenue from client trading, accounting for 66 percent of the Group’s OTC leveraged revenue in 2019, as compared with 58 percent in 2018.

For foreign exchange (forex), the revenue from clients trading was 13% lower than in the prior year, coming in at £82.4 million. FX revenues represent 18 percent of the Group’s OTC leveraged revenue in the year.

The level of client trading in cryptocurrencies in fiscal 2019 fell significantly, with revenue down by 72 percent year-on-year.

Breaking OTC revenues into geographies, the ESMA-affected region (Europe and UK) reported total revenue of £263.4 million in fiscal 2019, which is lower by 3o percent year-over-year.

In its emerging markets, the UK-based broker saw a yearly uptick of 36 percent in OTC revenues, coming in at £17.6 million for the year. In Japan, the firm also saw a 29 percent growth in OTC revenues.

So far today, IG Group Holdings plc shares have fallen by as much as 4.5 percent, reaching a low of 558.80 pence per share, having started the session at 584.00 pence per share. As of the time of publishing, however, IG’s share price has managed to make a slight recovery.

In the European Union, the number of active Retail clients in the second quarter of 2019 reduced by 10 percent when compared with Q1. However, it has remained stable in the subsequent quarters.

In Q2 of fiscal 2019, the average revenue per Retail client (RPC) fell by more than 40 percent quarter-on-quarter. Following the second quarter, the average retail RPC remained fairly stable. However, the RPC for professional clients was more sensitive to market volatility. 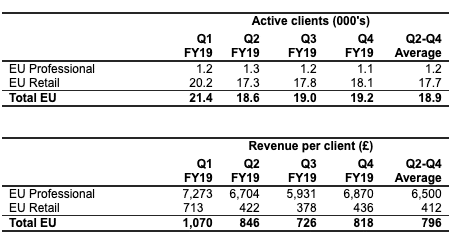 Despite the sluggish 2019 fiscal results, IG Group remains confident that it can return to revenue growth in fiscal 2020. The London-headquartered firm plans to do this by capitalizing on the “substantial” opportunities still available to it in the geographies it operates in.

In the European Union (EU), IG sees there is a large opportunity to launch new leverage products. Through its multilateral trading facility (MTF), Spectrum, the company plans to take a meaningful share of the on-venue turbo market, by launching turbos on equity indices, currencies, and commodities.

In the United States, the broker believes that due to the fact that it is one of only a few players in the market, it will be able to capture a significant share in the OTC FX market through competitive pricing and its client service offering.

For its institutional operations, the online trading provider plans to target family offices and small hedge funds with the aim of using its depth of liquidity and range of markets to gain market share in this segment.