Online forex and CFDs trading and spread betting brokerage IG Group has announced its financial results for the first half of fiscal 2017 that ended on November the 30th 2016. The company reports record profits amid increasing numbers of new clients.

Net trading revenue was up 14 percent to £244.9 million ($305.1 million) when compared to the previous year. The result is in part related to increasing new and active client numbers. IG Group is reporting that the figure increased by 59 percent on a yearly basis.

Operating expenses rose by 23 percent, largely due to increased marketing costs. The profit of IG Group was higher by 6.7 percent, reaching £105.2 million ($131.3 million).

Commeting on the results, the CEO of IG Group, Peter Hetherington, said: “The business once again proved the resilience of its operating model and its people, as it dealt exceptionally well with the short term volatility in the financial markets caused by two significant political events.”

During the period, IG Group has actively engaged in a number of initiatives, including the acquisition of Daily FX from FXCM and the rollout of stockbroking in Australia and France. The company has committed to ongoing consultations with the UK FCA and states in its announcement that it is supporting the regulator’s goal of improving client results. 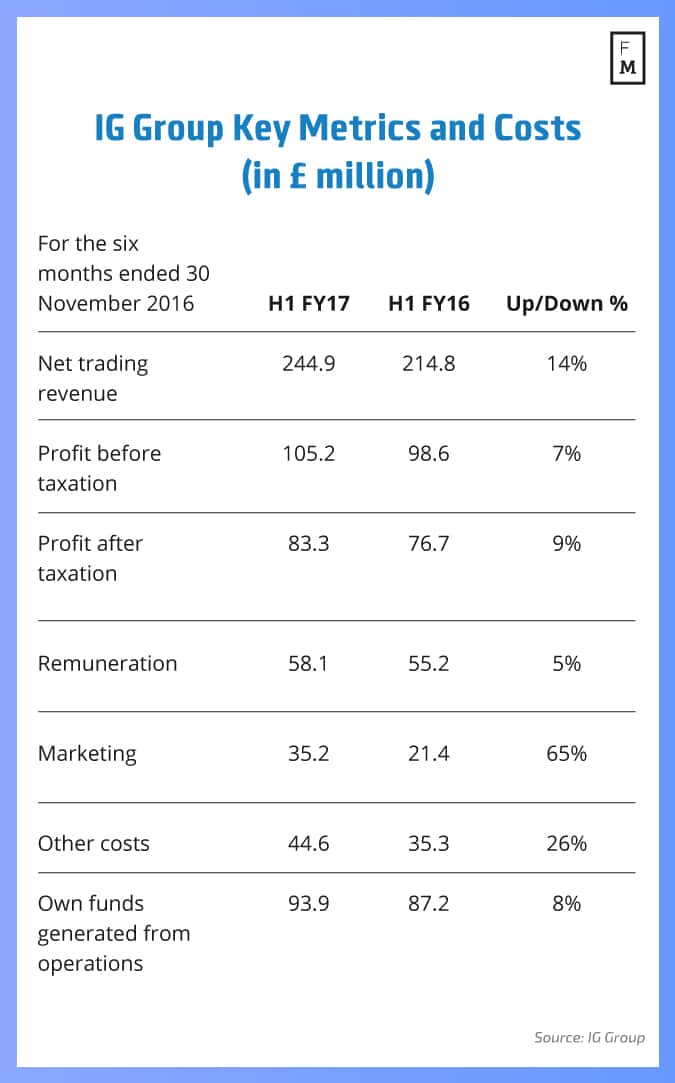 The company also received a new license in the UK for a discretionary managed Investment service. IG Group is aiming to secure additional revenue streams as the regulators are focusing on the profitability of clients.

The CEO of the company elaborated: “In January, we received our licence from the FCA to offer an investments service to clients in the UK, in partnership with BlackRock, and intend to launch our smart portfolio ETF product in the UK in the near future.”

The broker has also launched a Limited Risk account, which provides a no-negative balance guarantee, appeasing European regulators in France and Germany. The company states that about half of new accounts opened in the UK are using this option.

“We welcome the intentions of the FCA and other European regulators to improve consumer outcomes across the industry, and we believe that IG’s Limited Risk account will play an important role in this,” Hetherington explains.

In a letter to affiliates, IG Group stated that it will no longer be paying for leads related to binary options. The move is part of a broader industry trend that is aiming to limit dishonest advertisement of the high-risk product.