UK publicly listed brokerage IG Group (LON:IGG) has just filed its trading update to the London Stock Exchange for the three months up to 29 February 2016, the third quarter of its 2016 financial year. Revenue in the third quarter reached a new record level of £122 million, up 18% from the same period in the prior year, and about 9% from the second quarter of the 2015 financial year, IG’s previous highest quarter.

IG explains that the reasons for the strong showing are that “a constant flow of macro-economic news created reasonable levels of volatility” as well as improvements to its online marketing capability. Last year’s figures are quoted before the impact of the Swiss franc crisis as IG says that provides a better assessment of year-on-year performance. 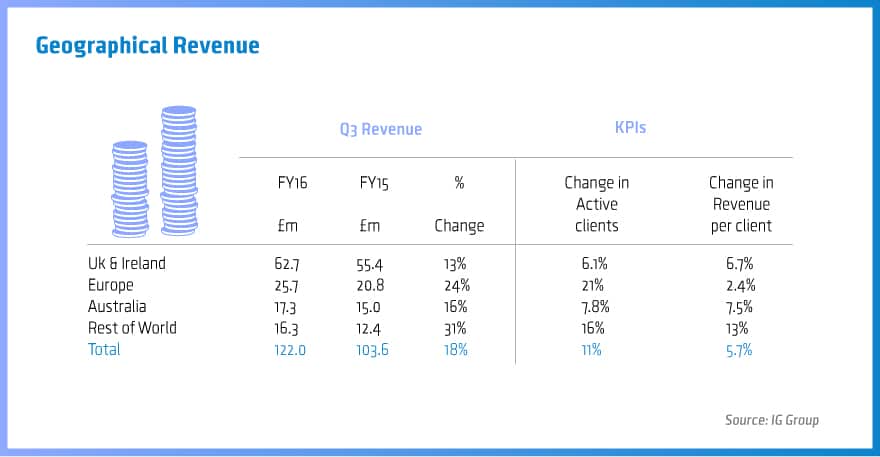 IG reassures investors that it enters the fourth quarter in a strong position, with good execution across the business and healthy new client inflow. It notes two issues that might make an impact on its bottom line in the future. Last week’s UK Budget announcements included proposed revisions to the definition of excluded entities for the purposes of the Bank Corporation Tax Surcharge. The description of the proposed revisions suggests that the surcharge will not apply to the company but the final legislation is expected to pass into law later in the year.

Additionally, regulatory discussions continue in France around possible restrictions on the direct marketing of OTC derivative products. Less than 5% of the IG’s new clients have been resident in France. IG recruits clients in France via many channels, some of which would likely be impacted by any direct marketing restrictions. IG says it will be better placed to assess any impact here, and how best to address this market going forward, once the situation is clarified later this year.