2015 proved another ugly year for gold, with prices tumbling over 10% amid the weak inflationary outlook and strengthening dollar which helped to keep a lid on the price of precious metals.  However, since the outset of 2016, gold has crept higher alongside volatility as concerns about the health of the global economy weigh on investor sentiment.

Gold has not lost its allure for risk-averse investors wary of the outlook, especially considering spiraling global trade and a commodity glut that has seen the super cycle of the early 2000s rapidly reverse and correct lower.  Amid all the volatility emanating from China in particular, investors have been quick to shift from yield to quality, with gold’s recent serving as prime evidence of the growing ‘risk off’ sentiment.

From the standpoint of simple supply and demand, the growing trend of gold moving from west to east has not subsided with rising emerging economies continuing their rapid hoarding of precious metals.  China in particular has been a large accumulator of gold as it attempts to diversify foreign currency reserve holdings away from US Treasuries.

However, the rapid amount of buildup is likely to slow in the coming months, especially as policymakers work to tackle a host of other issues, namely the fixing of the yuan and rebuilding confidence in equity markets.  Capital is rapidly attempting to escape from China as local investors search for alternatives during the latest round of yuan devaluation.  Aside from dollars, a major source of interest remains gold, with demand surging amid the volatility evident in Chinese stocks.

Aside from the concerning outlook, fundamentally gold prices have limited upside to gain until inflation really begins to rebound

Aside from the concerning outlook, fundamentally gold prices have limited upside to gain until inflation really begins to rebound.  Advanced economies are still struggling to boost inflation, employing a myriad of strategies to stoke price increases including money printing and devaluation.  Nevertheless, prices continue to stay stagnant or show at very best limited growth.

While the dollar basket continues to trade mostly flat since the beginning of the new trading year, the main driver of gold prices remains rising risk premiums.  With the bull market in stocks looking exhausted and risks of a debt implosion thanks to the easy monetary conditions of the last five years, portfolio risks do justify a hedge against the growing uncertainty.

If China continues to spin out of control, gold prices could quickly regain momentum higher over the medium-term as appetite for haven assets grow.

Storing value and wealth becomes more prescient, especially when valuations for other asset classes are coming under pressure

Classically, gold has had a reasonably strong inverse correlation with the dollar, however, since the beginning of the year, the US dollar index has stayed mostly flat while gold prices hurdled over the critical $1100 per troy ounce psychological level.  However, while the dollar basket has remained constant, the unwinding USDJPY carry-trade shows an uncanny inverse match to gold’s momentum higher.

If USDJPY remains a strong barometer of risk sentiment, any further drops in the currency pair could be a strong indication that gold prices are set to rally additionally from present levels back towards resistance at $1120 and $1132 on the upside. 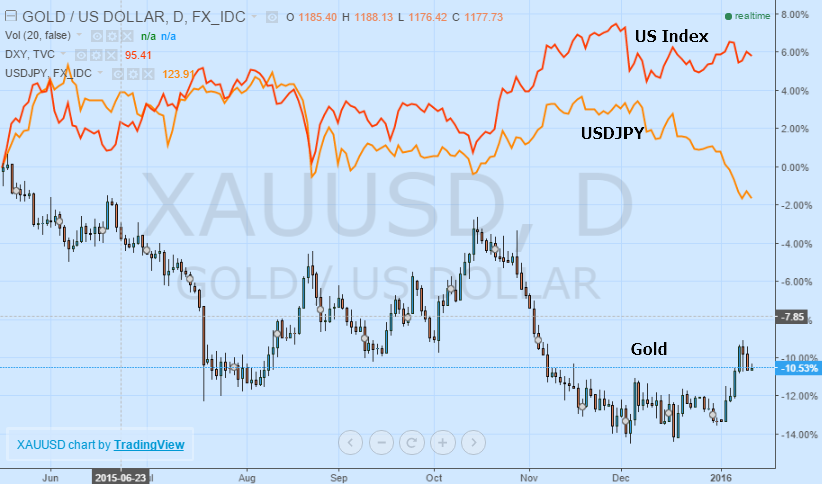 Indicators are currently mixed as far as sentiment with the 50-day moving average currently acting as support while the 200-day moving average acts as resistance.  On a more medium-term basis the equidistant channel pattern remains intact, confirming the existing bearish bias despite the possibility of more upside momentum over the near-term.  Ideally, short positions will be initiated closer to the 200-day moving average with expectations that gold prices will once again retreat.  However, a move back above $1200 per troy ounce is unlikely at this time with resistance at $1188 unlikely to budge.  On the downside, should support at $1092 be crossed once more, it paves the way back towards $1065 and eventually towards the double bottom at $1047. 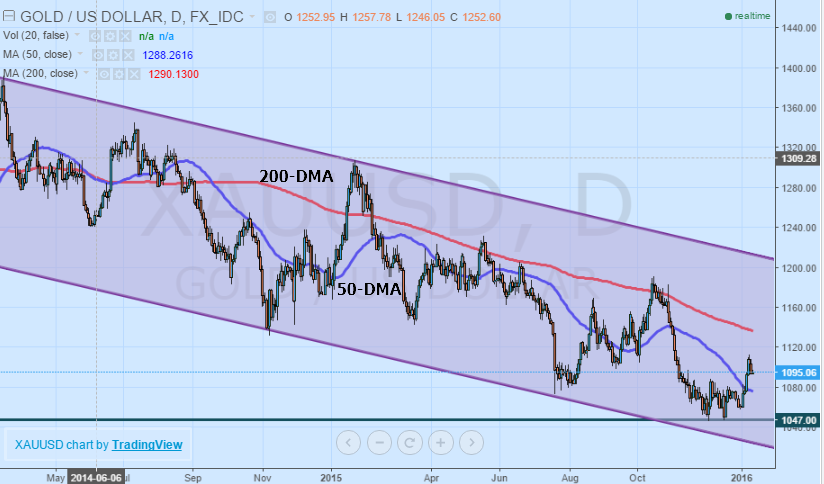 While gold prices might be temporarily elevated based on the volatility emerging out of Asia since the beginning of the year, the main fundamental drivers of upside momentum remain absent.  With inflation levels still subdued and the US dollar relatively flat as investors await more data before taking larger bets on the future of monetary policy, these two factors will not be the catalyst for higher prices.

However, should volatility remain a characteristic for the coming weeks, increased risk aversion and haven flows are likely to push prices higher despite the technical considerations that show the bearish bias remains in gold.  However, what should be most noted is that gold’s decoupling from the dollar is indicative of the beginning of a newly developing crisis.  If the global economy is unable to steer itself clear of the malaise, price momentum higher in gold is likely to see the precious metal knocking on the door of $1200 per troy ounce.