Japanese foreign exchange broking giant Gaitame has reported its comprehensive trading metrics for the month ending April 2016, which continued to illustrate a growing number of accounts and other key volumes figures, both over a MoM and YoY interval, according to a recent Gaitame release.

In terms of client accounts and the broker, Gaitame saw a total of 417,204 accounts in April 2016, justifying a marginal move of less than 1.0% MoM from 414,839 accounts in March 2016 or a net increase of 2,365 accounts during the month. However, the latest monthly figures at Gaitame have now built on a string of consecutive performances, which have climbed in every month of the 2016 year, rising 2.0% YTD, as well as an all-time high.

Looking at the group’s deposit totals in April 2016, Gaitame disclosed a figure of $1.1 billion (¥114.6 billion), edging higher by less than 1.0% MoM from $1.04 billion (¥113.1 billion) of deposits in March 2016. As was the case with the number of accounts at the broker, the latest figures notched all-time highs at Gaitame and four consecutive months of advancement. 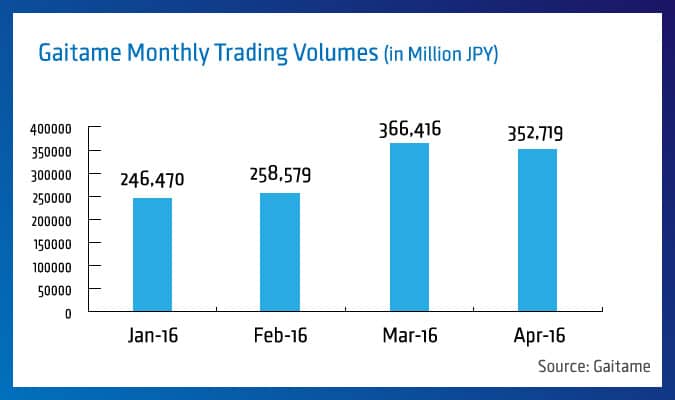 Share this article
Tags: gaitame / volumes
Got a news tip? Let Us Know