American brokerage GAIN Capital Holdings, Inc. (NYSE: GCAP) has released its metrics for the month ending September 2016, showing a strong recovery in trading volumes after the sharp slump it suffered in August.

During September 2016 GAIN Capital recorded over the counter (OTC) trading volumes of $207.8 billion, an increase of 8.3% from August but still a decrease of 40.3% year over year compared with September 2015. Taking into account the comparable number of working days, we see that the OTC average daily volume in September of $9.4 billion is an impressive increase of 13.2% from August 2016.

“Q3 2016 was marked by lower volatility and narrow average true ranges for many products, which resulted in lower customer engagement and a decrease of GAIN’s quarterly retail revenue per million of nearly 30% below our 1H 2016 levels,” remarked Glenn Stevens, Chief Executive Officer. “The decline in volatility and customer engagement impacted much of the retail industry with GAIN and its competitors showing significant declines in quarterly volumes.

However, we have seen a significant increase in volatility and engagement in early October and expect this to continue over the course of Q4 and into FY 2017 as a result of Brexit concerns, the US presidential election and continued uncertainty relating to global interest rates,” concluded Mr. Stevens. 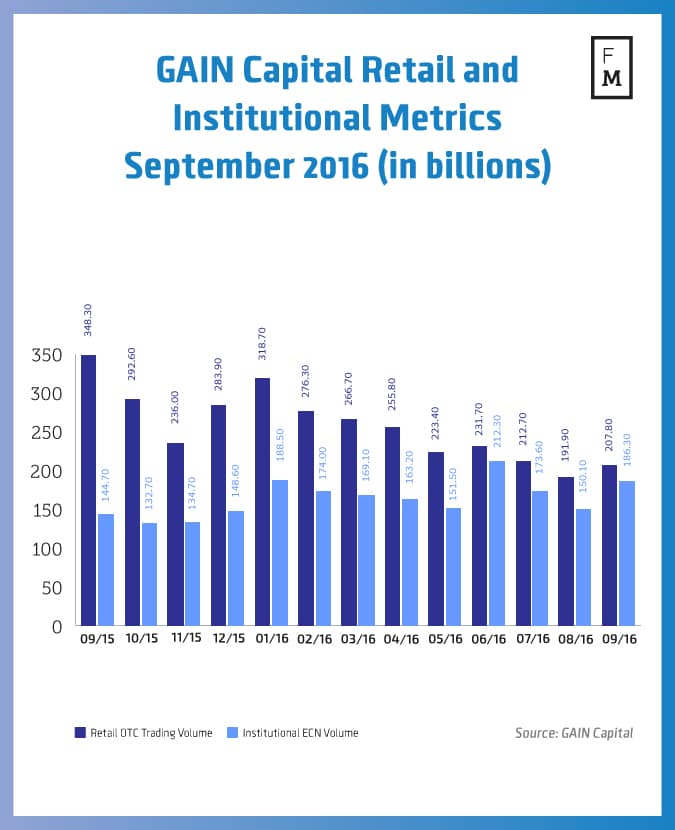