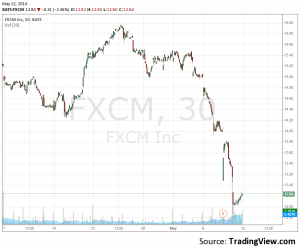 FXCM posted its Q1 financial report last Thursday. The headline numbers was a 6% year-over-year decline in revenues to $115.0 million and adjusted pro forma earnings per share (EPS) of $0.07 which missed analyst expectations of $0.12. Following the earnings miss, shares of FXCM have been trending lower, having fallen about 8% to $12.85 from last Wednesday’s pre-news closing price.

Beyond the financials, today we analyze FXCM’s post earnings conference call and presentation for a further update into their business. Among important items was clarity on the valuation of the purchase of FXDD’s US retail book, as well as an update on further mergers and acquisitions (M&A) in the pipeline.

Volatility – First half 2013 has quickly become a distant memory as volatility has dried up this year. Specifically, this past April and May are now being viewed as some of the quietest months in years. Speaking about the situation, FXCM CEO, Drew Niv attributed the volatility decline to be effecting his company’s and the industry’s bottom lines in 2014, stating in the conference call, “The currency volatility declining from the already low levels of late 2013 to levels we’ve only see twice in over 20 years.” He added, “Certainly the worst trading conditions I have seen in 17 plus years I have been in this business.”

FXDD Details and M&A – But, according to Niv, he believed the volatility provided M&A opportunities for FXCM. The firm reported that it purchased FXDD’s book for $5.5 million, which accounted for $27 in client equity and 7,300 active traders. Another way to look at the deal is a form of onboarding clients, as they paid approximately $750 per active client. The figure is in line with industry estimates of $500-$1,000 in average customer acquisition costs. However, it could be considered a little on the pricey side due to the possibility of clients deciding not to continue with FXCM. It is worth noting that in FXCM’s smaller take over of Alpari’s retail US customer book, the firm didn’t provide an upfront payment; with only future compensation based on trading volumes.

Speaking about M&A, Niv commented that the firm has four potential deals in their pipeline, adding that any of the deals would become their largest retail acquisition to date. Niv added that FXCM has the financial ability to close on three of them. This isn’t the first time Niv has alluded to a large deal in the pipeline, as these are comments he mentioned throughout 2013. Based on Niv’s rhetoric now and in the past, FXCM appears to have placed several bids on different brokers, whose owners are holding off for better prices, while FXCM is waiting for valuations to decline to their offers. This was evident as Niv stated that he believed if we had another six to nine months like the last two, “It was entirely possible that the competition in many jurisdictions will decline by more than half.”

Institutional Division – Commenting about their institutional division, FXCM stated that they are achieving revenues of $12 per million traded. Niv mentioned that the unit is benefiting from increased market share in emerging markets, where western banks have been reducing their exposure. He also mentioned that changes made on competing platforms such as “anti-HFT measures” have driven traders away from these venues, benefiting FXCM. Niv added that on the other hand, the advent of anti-HFT measures will be a long-term positive for Lucid as they aren’t considered one of the fastest players in the market.

V3 – Created earlier in the year as partnership between Lucid and FXCM, V3 was formed to acquire assets and apply Lucid’s algorithmic trading knowhow to other asset classes. The first acquisition was high-speed trading infrastructure from Infinium Capital. Niv provided an update that they are about half way to executing the model for V3 into other asset classes, but currently Infinium’s legacy business isn’t profitable.

Japan – During the conference call, Niv was asked about Japan’s regulatory clampdown on the sourcing of Japanese clients by Australian brokers and how that affects their business. Niv answered that similar to the US, Japan regulators prohibit non-Japanese regulated brokers from soliciting Japanese clients. He added that the rules are now becoming more enforced by Japan which would benefit FXCM’s business as they are regulated in the country, saying, “The Japanese are doing a better enforcement of that and essentially makes the choices for Japanese customers more limited to onshore brokers which we’re part of and that is as you know obviously better for us.”

European Potential and Single Share CFDs – After being ignored for several years in favor of emerging markets, Europe is once again being focused on by brokers. This was seen earlier in the year when IG Markets and Plus500 issued their earnings, showing growth taking place in Europe. When asked about Europe and CFDs, Niv cited that their feedback from customers was that they could grow their European CFD business if they launched single share CFDs. Specifically, he pointed out that their average account size in Western Europe is $15,000, while their two largest competitors with single share CFDs in the region have average accounts of $40,000 and $69,000.