US-based and listed FXCM Inc, under ticker FXCM on the NYSE, today reported key trading metrics for March, with mixed results showing a decline of 6% month-over-month (MoM) to $291 billion when compared to February, yet institutional volumes were up 57% during the same period.

In addition to the 6% decline from February, the March total of $291 billion was also lower when compared year-over-year (YoY) against March 2015. Overall, a similar trend can be seen this month, when comparing the mixed results in February, as reported by Finance Magnates.

Quarter-over-quarter (QoQ), the company said that retail trading volume during Q1 2016 reached $931 billion, down 3% compared the prior quarter during Q4 2015.

FXCM reported that it added just 214 new accounts, a figure that was little changed from the prior month, by 0.1%, and helped to reach 4,829 accounts YoY or 3% higher from March 2015. The number of tradeable accounts also rose slightly by 1% from February and reached 167,364 as of March, while YoY the total decreased 10% or by 17,812 accounts from the same month a year earlier. Shares of FXCM closed up nearly 2.67% around the time of the news, reaching 11.11 per share on the NYSE this Monday afternoon in New York. 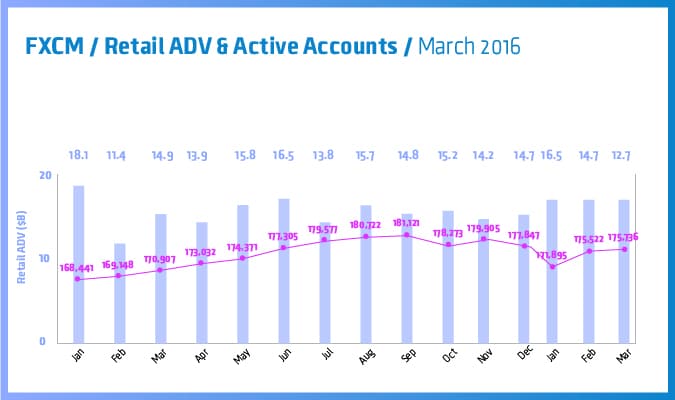