FXCM Group has released a comprehensive execution quality report for the ‎two-month period ending on February 28, 2018. The company also ‎published spreads statics for the fourth quarter of 2017, detailing average ‎spreads throughout the three months to December on its trading accounts.‎

Slippage is the difference between the quoted prices and those at which the ‎client’s orders have been executed by the broker. The less slippage the ‎trader gets, the better his trading results will be. ‎

According to figures stated in the report, the average spreads on the ‎EUR/USD, USD/JPY, GBP/USD and AUD/USD currency pairs were 0.1, 0.2, ‎‎0.2 and 0.3 pips respectively at peak trading hours, which FXCM defines as ‎the period from 0600 – 1800 GMT from 1 October 2017 through 31 ‎December 2017, excluding weekends‎‏.‏

The company noted that 59% of EUR/USD, 12.3% of GBP/USD ‎and 38% of ‎USD/JPY trades incurred spreads equal to 0.1 pip or less during the Q4 ‎‎2017. ‎The report also showed the average total cost to open a 1k position on each ‎pair through the fourth quarter. During non-peak hours, average spreads on ‎the four major pairs were doubled as shown below‏:‏

For the GER30, one of the most widely traded instruments in Europe, the ‎company averaged 0.9 pip during the most active trading hours. The ‎average cost to trade GER30, assuming a 1K trade, was $0.07 during peak ‎trading hours‏.‏ 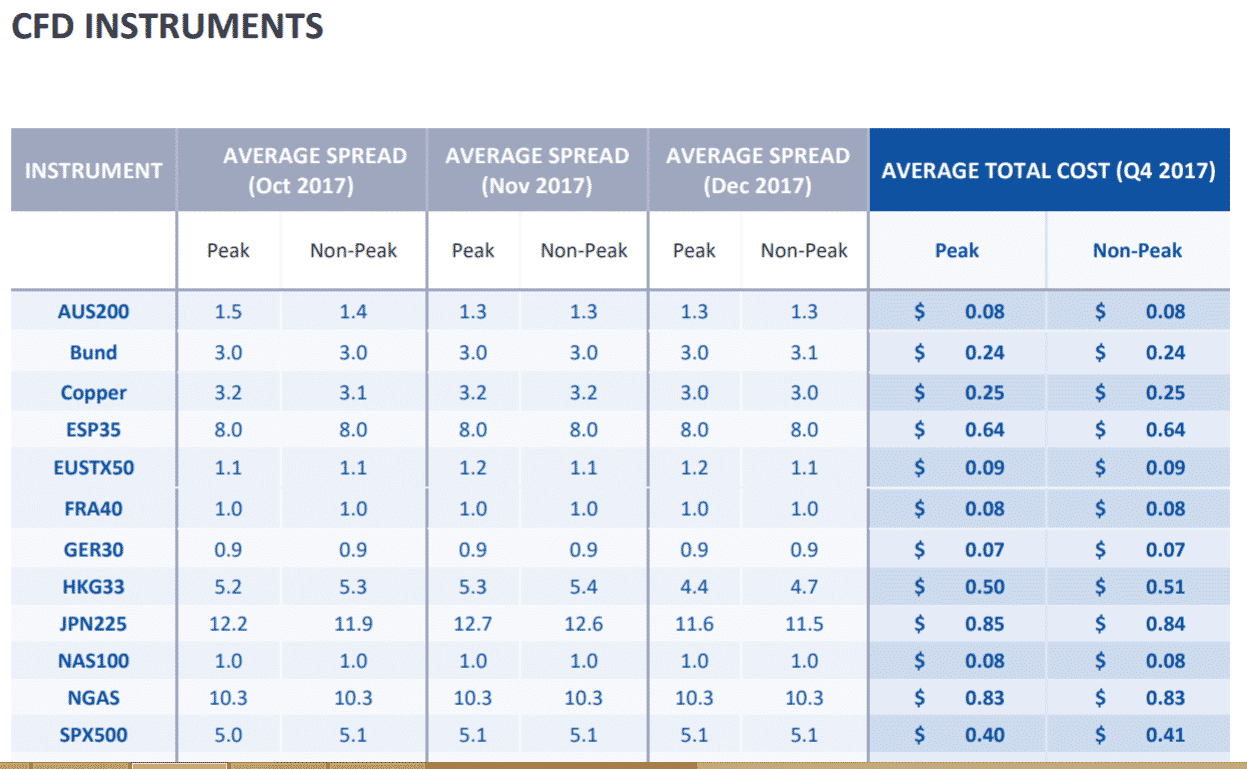 All in all, over 89% of all orders received positive slippage or zero slippage.

Additionally, the online brokerage has disclosed its Effective Spread Widget, ‎which displays FXCM’s quoted spread for its top FX pairs, and compares ‎the figures with actual spreads, at which trades were already filled, with the ‎difference being displayed in a table key.‎

Commenting on the findings, Brendan Callan, CEO of FXCM Group, said: ‎‎“What matters to traders is not what rate a broker quotes them but at ‎what rate the broker fills them. FXCM’s clients experienced positive ‎slippage on 25.79% of their orders and negative slippage of only ‎‎10.88 percent*. Due to our relentless work with liquidity providers we’ve ‎been able to get our clients better fills than the spreads quoted on the ‎platform. Many brokers will advertise tight spreads to entice traders in ‎but through slippage and skewing, the trader often unknowingly pays a ‎considerably higher Effective Spread. Choose your broker based on ‎their Effective Spread, not their quoted spread.” ‎