Update: more details of the ODL acquisition have surfaced, read about it here.

FXCM, arguably the largest broker in the world in terms of volume, has just announced plans to go public in the US. It would be interesting to see FXCM actually complete the IPO unlike Gain, one of FXCM’s largest US competitors (FXCM’s announcement comes exactly 12 months after Gain’s, how ironic). These news come amid FxPro’s potential IPO on London’s AIM. After August draught, the forex news market is back with a bang!

Calculating FXCM’s deal with ODL (3.5% of FXCM’s shares in exchange for 100% of ODL’s shares valued at $23.6m) it seems that FXCM is valued at about $676 million (much lower than the rumored $1.5 billion figure). FXCM’s 2010 income is going to be about $95-100 (ODL’s is losing money, a lot of it actually) which gives only a x6-7 multiple to this deal. Pretty low if you ask me although FxPro is priced using exactly same multiples so this must mean something.

In a recently submitted forms FXCM says is looking to raise $200m (value and use of proceeds still unavailable) and disclosed the following facts, amongst many others: 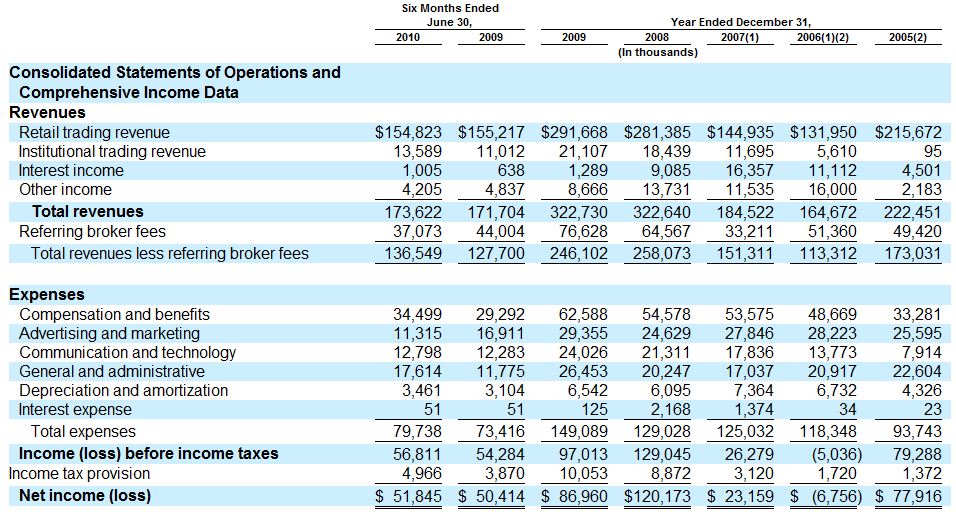 Refco impact and other IBs/WLs: 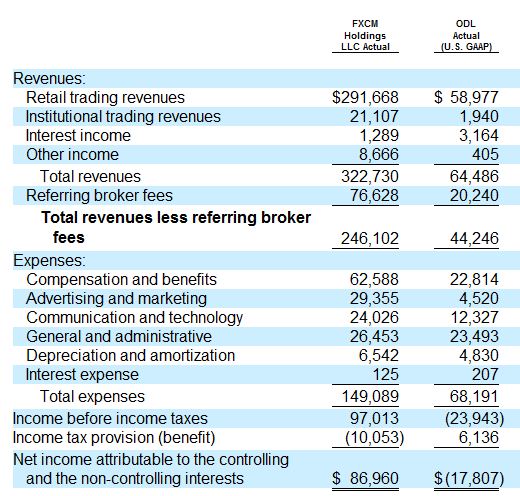 I was working at CMC when they had planned their first public offering in 2006, everything was looking bright however the CEO thought that FTSE was undervalued (pre recession) there are a few brokers who are public e.g. IG, London capital Group etc.

It is an excellent decision by FXCm, it will make them more transparent and overall the industry will benefit.

This will hamper costs however most brokers are going ECN.

Interesting development. Any thought about what they will do with the money that will be raised?

They’ll use it as a legal defense fund against the CFTC when they come after them for trying to push US funds overseas. Mark my words.

If I had to guess I would say that it has more to do with regulations than with acquisitions. They don’t need more cash to expand their business or to acquire brokers. Public companies are being regulated by the SEC for compliance and they would probably find a way to shake off the CFTC’s regulation and be able to dominate the US market offering high leverage, hedging and no FIFO. But that’s just my guess. I would definitely buy shares of FXCM when they IPO – they have a very strong team and have managed to maintain a very strong… Read more »

I don’t think FXCM have any VC money – they are an LLC which has controlling power with their partners. VC companies are usually structured as a corporation with a controlling BOD.

IPOs are a bad way to liquidate investors especially for financial companies that the public can’t really understand or like their business model.

yes gain and ibfx have had external money, a firm the size of fxcm whose yearly marketing budget is over 5 million must have someone feeding them?

what do you think about cmc markets, they had a handsome cash injection by goldman late 2007, as i mentioned earlier they have been gearing themsleves for a float and i think the delay has been market timing, new branding on the website, new platform etc etc.

the new cmc platform is definitely the right step for them, market maker is the bees nees of the industry but the last web based platform in 2007 wasnt the ebst.