US retail forex industry is now showing obvious signs of slow down with number of non-discretionary retail forex accounts held with US based reporting brokers down to record 97,206. This is the lowest count reported since Q3 2010 when first such report was released. Reasons can be many but without any doubt extreme regulatory climate has made it extremely difficult for American brokers to attract new clients. In fact only Forex Club and Tradestation have reported growth in number of accounts they hold.
American brokers now face very high compliance and regulatory costs on one hand while on the other they are not competitive as leverage, FIFO and hedging requirements forced foreign clients look elsewhere. American traders themselves were forced to either comply with those requirements or simply exit the market (and hopefully for the futures lobby: go back to trading futures). There might be other explanations to this such as seasonal slowdown and relatively low volatility. Brokers may have been moving foreign traders to their foreign subsidiaries – as same trader in a foreign subsidiary is more profitable than in the American one due to the reasons mentioned above. However regulation without any doubt had a huge impact on this industry’s slowdown. 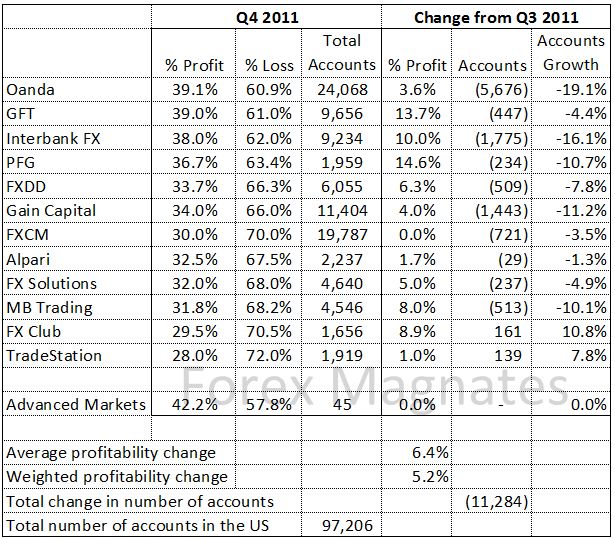 Michael, are there any statistics how many active FX-broker accounts exist in the US?

Ok, thank you Michael. I was surprised by the report, thought US FX retail market is bigger.

So how many brokers are in the US now? I seem to recall reading ’16’ at one point but dont know if thats accurate anymore.