The latest CFTC financials data for the month of January continues to show difficult times for retail brokers operating in the US market. Of the eight authorised providers, the six retail-focused firms saw reductions in the value of clients’ assets held. However, institutional-focused firms boosted the total value of client assets held at brokers in January, with an overall uptake of $18.1 million month-over-month.

The largest retail forex provider, FXCM, saw clients’ assets drop by $31 million to $178 million, a decline of 15% from the $209 million reported in December, thus reporting the largest decline in client assets.

In the institutional space, both Interactive Brokers and Wedbush Securities reported an uptake in the value of client assets held, with Wedbush reporting an increase of $43 million. The firm that acquired KCG’s brokerage unit was not previously listed as an authorised firm that held retail client money.

Interactive Brokers, also reported an increase in client funds with an increase of over 20%, for the month of January. The firm saw client money increase to $49.2 million from $40.1 million reported a month earlier. 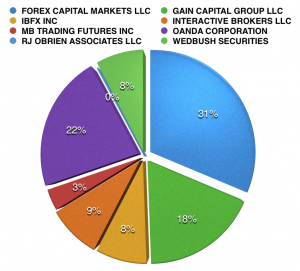 The decline in retail FX funds is attributed to the events of 15 of January which saw havoc in the global currency markets on the back of the Swiss central bank removing the floor. As a result, a number of retail FX traders lost large amounts of trading capital. At the same time, the after-effects involving certain brokers led to clients withdrawing funds in a panic, as the future of providers was in question.

Share this article
Tags: brokers / CFTC
Got a news tip? Let Us Know

But on track to repay the loan LOL!!!

Heading to Bankruptcy faster than the speed their share price is dropping.

This is a 25% drop compared to November figures!!!

But always on track to repay the loan LOL!!!