Investment Trends, an Australian wealth management and online brokering research organization, released a report about the state of the CFD, retail FX and Spread Betting markets in the UK in 2013.

The report was based on an in-depth study of 13,185 Britain-based investors that was conducted in August and September of 2013, and had four main findings.

The study found that 85,000 people in the UK used financial Spread Betting (SB) during the year before September 2013, a net decrease of 8% from 92,000 recorded in July 2012. This finding presented the first contraction in the size of the market since the inception of the study in 2009. The report found that the contraction in SB was driven mainly by a decrease in the number of new traders, while the number of traders going dormant remained largely unchanged.

The Contracts For Difference (CFD) active trader numbers shrank by 16%, from 25,000 to 21,000 during the same time period. With the crossover between the SB and CFD markets taken into account, about 93,000 UK residents used at least one of the two products (down from 104,000 last year). With trader numbers hovering around 100,000, the UK is by far the largest CFD/Spread Betting market among the five countries examined by Investment Trends (including Germany, France, Australia and Singapore).

The UK retail FX market saw a much more modest 3% contraction in trader numbers, from 74,000 in July 2012 to 72,000 in September 2013. The vast majority of FX traders (74%) use Spread Betting and/or CFDs to trade currencies, although this proportion is falling.

Pawel Rokicki, Investment Trends’ Senior Analyst, commented on the findings in the study saying: “Both the spread betting and CFD market saw a reduction in new trader inflows in 2013. With a sustained upward movement in the FTSE since mid 2012, many ‘would-be’ leveraged traders settled into traditional share trading. The equity trading-heavy CFDs were hit the hardest while FX came out relatively unscathed, especially the “pure” FX specialists, many of whom managed to grow market share.”

The report listed the top five companies in each of the three markets by market share according to the study: 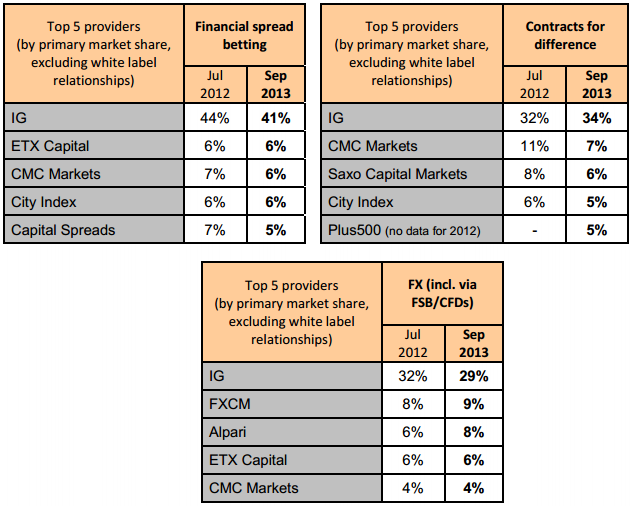 FXCM and Alpari both saw their market share grow in the UK FX market. The report also saw fit to mention that FXCM’s market share is growing fast in the other countries examined by Investment Trends, such as Germany, France, Australia, and the US.

Speaking with Forex Magnates about the finding, Elad Even-Chen, VP Business Development at Plus500 said: “Whilst it is difficult to ascertain our exact UK market share, we believe Plus500 is the fastest growing CFD provider and fully expect to significantly grow our market presence, not just in the UK but globally during 2014.”

The study found that a high level of client satisfaction was reported in 2013 by traders in the SB, FX and CFD markets, same as in the year before. For example, 41% of spread betters gave their provider a very good rating, 45% rated their broker as good, and only 1% gave a poor or very poor rating.

In the FX market OANDA was rated the highest on value for money, customer service, execution speed and commissions; Saxo Capital Markets on platform reliability, and ETX Capital on range of currency pairs.

CMC Markets had the highest client satisfaction overall among CFD traders and was rated the highest in most individual categories in this market.

Spread betters rated IG’s platform highly, giving the broker the highest scores for execution speed, reliability, range of order types and range of instruments to trade. CMC Markets came first on platform features and mobile trading. InterTrader.com was rated the highest on value for money and spreads by its clients; Spreadex on customer service and consistency of execution, and Capital Spreads on ease of platform navigation.

Mobile Platforms Have Become the Norm

“These days it is not enough to just let clients trade from their mobile or tablet. They want good functionality and all the bells and whistles available on the desktop platform. A quarter of mobile traders would still like to see further improvements to their app,” said Rokicki.

Can someone help me understand why Alpari relieved Daniel S of his CEO duty in the UK if he was responsible for growth?

@Michael Greenberg it was announced he relieved himself. But it became clear he was forced out. In previous posts on Forexmagnates it sounded as if he was pushed out by investors.

Usually people relieve themselves when there are disputes with the board and founders.
Its the noble and respectable way to go versus being given the Finger and told to leave

The point I am trying to make is that Daniel S helped grow Alpari (as stated in this article) but was still for all intents in purposes fired.

Regarding changes, if we look at the more successful firms such as FXCM and Gain Capital management has gone through very few changes.