Although it is easy to look at the German economy within the context of the broader euro area, when picking apart the pieces, it becomes increasingly apparent that the growth engine of Europe is in many ways outperforming its peers.  Despite the multitude of tail risks that are emerging in global financial markets, the German DAX 30 equity benchmark continues to rise, boosted in large part by a supportive monetary policy backdrop.

As regional bond yields continue to reach new record lows, investors seeking alternatives have increasingly turned to the equities as a source of higher yielding returns, adding to the upward buying pressure. Even though the German economy remains sensitive to external developments, the breakout higher and ongoing rally in the DAX will remain supported by a number of factors over the medium-term.

The abundance of global headwinds working against growth make Germany’s recent economic performance all the more spectacular.  Even though conditions may indeed be challenging, trade for Germany has improved over the last year as evidenced by the latest bit of data.

The surplus, which was 4.18% higher year over year, was helped along by rising exports and imports according to the most recent figures released by the Federal Statistics Office.  Although the growth has been sluggish, demonstrated by the 0.40% expansion recorded during the 2nd quarter, the real driver for stocks has not been fundamentals so much as the policy tailwinds.

Thanks to the European Central Bank’s generous asset purchase program, yields across German Bunds have plunged, with all Bunds up until and including the 10-year note trading in negative territory.  As a result, investors hunting for yields have been forced to turn to higher potential returns in stocks.

Looking specifically at the DAX 30 performance, the index has managed to post gains of 9.79% over the last 52-weeks, making it among the best performing mainland European equity benchmarks.  The main driver of upside in the index over that time period was the stunning performance from Adidas (ADS:DE) which has risen 134.50%.

Performance for components was largely upbeat, with over 63.00% of components showing positive returns during the last year.  However, despite the positive backdrop, the outlook for further upside may be hindered by the performance of companies including Volkswagen and Deutsche Bank, the single worst performing component.

Growing concerns about Deutsche Bank’s balance sheet has spooked investors, evident from the -51.49% selloff in shares over the last year.  The banks removal from the Euro Stoxx 50 is even more discouraging, potentially reducing upside momentum in the DAX 30. 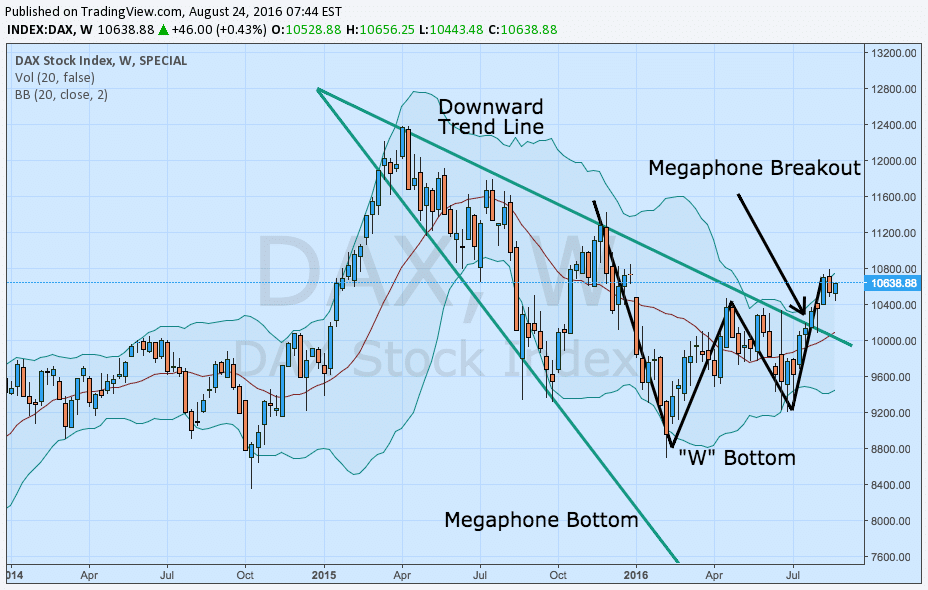 While the most recent DAX 30 gains have come on the back of an upturn in Central Bank asset purchases from Germany, from a technical perspective, the index has begun an upside breakout following a downward trend that began in 2015.

The megaphone bottom pattern that emerged during the period, forming the opposite of a consolidation, was broken to the upside towards the end of July, marking a reversal in the trend and paving the way for breakout price action over the coming weeks.  Adding to the confirmation of the reversal in price action is the ‘W’ bottom formation that has emerged as a function of the Bollinger bands which is traditionally accompanied by more bullish momentum.  When examined on a more medium-term basis, other indicators support further upside in the DAX 30.

Looking at the moving averages, it becomes clear that the support for the ongoing rally in the DAX 30 remains largely intact with both the 50 and 200-day moving averages trending below the price action.  Besides serving as support, the recent crossover which saw the 50-DMA cross the 200-DMA to the upside is another bullish signal for the DAX 30.  Although not a golden cross because the 200-DMA was trending modestly lower when it occurred, it does clear the way for further upside momentum.  Aside from the moving averages are the emergence of two equidistant channel formations.

The more long serving upward trend channel that began at the outset of the year is accompanied by a more near-term channel that materialized late in June.  In each case, the optimal bullish positions established near the lower channel line should target the upper channel line with major upcoming resistance at 10,800. 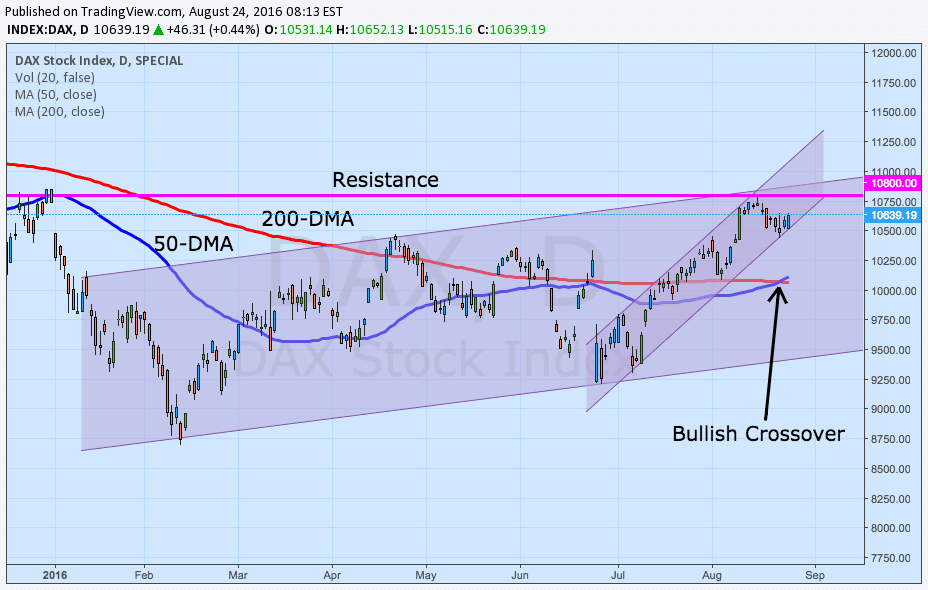 While DAX 30 components that have been especially beat up like Deutsche Bank, Volkswagen, and Bayer could be a drag on future performance for the index, in light of sustained accommodation from the ECB, these factors are unlikely to halt near-term momentum.

Although they could force a correction, without the emergence of a black swan event, more of the same is likely, especially as underperforming components manage to rebound as difficulties move increasingly towards the rear view mirror.  German data will likely take a back seat to monetary policy as the main driver of momentum and as the price action shows, the index may very well be in the early phases of an upside reversal, helped in part by numerous bullish indicators.  Risk factors may remain apparent for the coming months, however, they may prove negligible in light of investors preferring yield over safety.