Why hasn’t that happened yet? The simplest answer to this question would probably be “The Chinese Communist Party.”

Most regulatory bodies across the world have taken steps to ensure there is a legal framework in which the retail industry can operate.

The Chinese government, on the other hand, has built no such framework but has made a number of moves indicating it is not too keen on the industry.

That has created a mass of uncertainty, the effect of which has been to hamper the ability of brokers to operate in the Chinese market.

Alongside bans on marketing and problems with payments providers, brokers have had to fret over a number of government actions that have threatened their ability to operate in China.

Despite all of these concerns, brokers have continued to operate in the country – after all, it’s such a big market that the rewards usually outweigh the risks.

Nonetheless, uncertainty regarding the future still reigns. What exactly is going to happen remains unclear but, in order to get some idea of where the government stands, it’s worth looking at some of the goings on in the industry over the past 12 months. 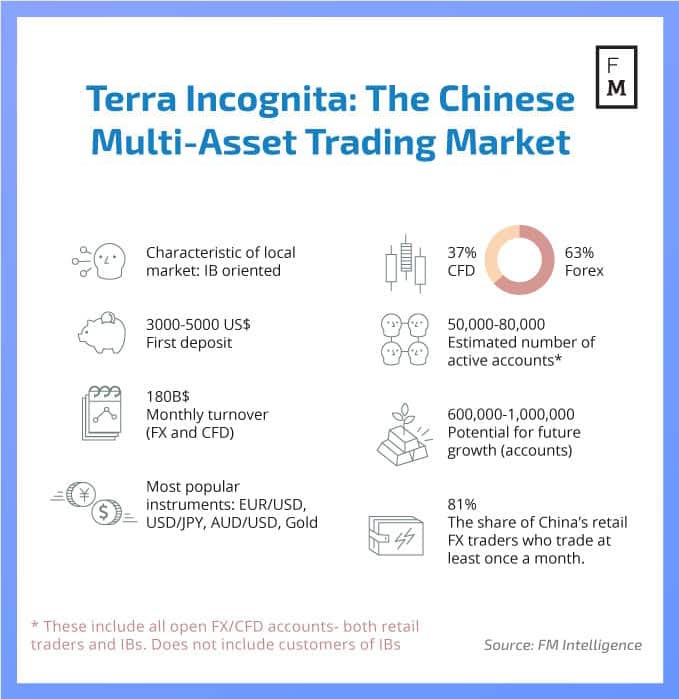 No adverts, no leads

In February of this year, Baidu, the largest search engine operator in China, announced that it would be banning advertising related to the forex industry.

Brokers on the receiving end of the ban didn’t have long to prepare for the changes. Those using Baidu’s services received a letter that their campaigns would be ending at midnight on the same day they received the notice.

Even if the swift implementation of the ban caught brokers off-guard, the ban itself wasn’t entirely unexpected.

In the run up to Baidu’s decision, users of the search engine found themselves being urged to trade leveraged FX through “proper channels”, via a warning, when they entered FX-related keywords.

This warning started appearing shortly after the National Internet Finance Association of China, a self-regulating body set up by China’s central bank, issued a warning against online trading firms in November of 2017.

A potentially positive sign for brokers is that this wasn’t the first time Baidu had banned FX broker advertisements. In mid-2016, the government ordered that the search engine cease displaying adverts for brokers.

That ban was lifted, with some exceptions, later on in the year. What spurred the reversal is unclear but it seems plausible Baidu was given a green light by the Chinese government to continue allowing brokers to advertise with them.

Today, a reversal from Baidu looks less forthcoming. The 2016 ban on advertising was part of a wider, large-scale crack down on false advertising, which occurred after a cancer patient complained of fake medical services being offered through the search engine.

Moreover, a Chinese government announcement, attacking 40 different FX brokers, in December of 2017 suggests that the Communist Party is not feeling amenable to the retail industry.

That announcement concerned itself with another problem that continues to plague the retail industry in China – payments.

I don’t want no payments

Payments have been a problem for retail brokers in China for a number of years. In 2016, several payment service providers (PSPs) were fined several million dollars for allowing brokers to use their services.

In this instance, however, the fines were not due to the brokers being brokers per se. Instead, it was due to the cross-border nature of the payments and the accompanying know-your-customer requirements.

The announcement a local branch of government made last December has spooked payment providers for quite a different reason.

The local branch of the People’s Bank of China in Jinan province released a statement claiming 40 FX brokers were engaged in money laundering activities. This wasn’t a rag-tag band of scam artists either. On the list were several large brokerage firms, including Apari and IG.

The announcement didn’t just warn against trading with the firms. It also ordered PSPs to stop providing services to the 40 companies.

The December announcement was followed up this June by a joint statement from the People’s Bank of China and the Chinese Police Bureau. In this statement, the two bodies said they would be fighting against illegal margin trading activity in China.

All of this has left PSPs feeling spooked.

Eugenio Accongiagioco, the Managing Director of APAC MC, a marketing consultant based in Singapore, told Finance Magnates that some PSPs were refusing to do business with him even though his company has no direct involvement in the retail trading industry itself.

For brokers themselves there are mixed signs. A senior manager at a foreign brokerage with a significant Chinese presence, who requested to remain anonymous, told Finance Magnates that he has to have more than ten people working on payments solutions alone.

“It’s more than we would otherwise have to use,” he said, “but the costs are worth the rewards. You can operate with PSPs in China, you just have to ensure you have the requisite knowledge and right personnel.”

Other brokers haven’t been so lucky. A Hong Kong-based consultant that Finance Magnates spoke to, said some brokers are unable to accept payments, lose funds and their clients can’t make deposits or withdrawals.

The last point is particularly significant. Given some of the less than scrupulous actors operating in the retail industry, being unable to withdraw funds usually leads immediately to suspicions of a scam.

“This is obviously bad for business and the industry as a whole.” said Accongiagioco, “Being unable to advertise is one thing. Clients being unable to withdraw their funds is another. People will think their broker is scamming them and that leads to more complaints and more suspicion in the industry.”

Where do we go now?

The problems with PSPs, lack of marketing ability and fears of government action have left brokers in a precarious position.

China is too big a market for them too ignore but getting on the wrong side of the government carries a greater threat of punishment than it would in other jurisdictions.

The current situation is also something of a guessing game – no one knows exactly what is going to happen. Moreover, the Chinese government has, in the past, taken extremely swift action against industries it deems unpalatable.

“China is like that,” said the Singapore-based consultant, “the government can sit and do nothing for years and then if they want to open up a market or shut it down, they can do it within one week. They proved that with online betting, binary options and p2p loans.”

All of this isn’t to say that we’re looking at the end of retail trading in China.

“The fact that the FX business is still there suggests the rumours of a crack down are exaggerated,” said the same consultant, “What is not exaggerated is the market problems and the difficulty with PSPs.”

Others are more sanguine about the Chinese market. Having had around 15 years to familiarise themselves with the ins and outs of trading, the argument goes, Chinese retail clients are becoming better at identifying bad actors in the industry.

“I think we’re seeing a maturing of the market in China.” The senior manager with a broker told Finance Magnates, “The retail industry is becoming almost self-regulating. People are getting much better at distinguishing between scammers and legitimate brokers.”

Those of a more libertarian persuasion might find this appealing but, almost paradoxically, it makes things more difficult. European regulation may be the chagrin of brokers but, by and large, brokers understand where they stand with regard to regulating authorities.

In China, things are more opaque and the government more temperamental. Things can change at any moment, whereas in Europe firms may have months, or even years, to prepare for regulators’ plans.

“You can’t do business in China without the right people.” Said the senior manager, “If you get the right people and have the requisite knowledge, you can operate in China. It’s still challenging but the pay-off means it’s worth it.”

That seems to neatly address the crux of the matter. If China was any other country, brokers would likely be indifferent to it. Instead there is an ongoing balancing act between brokers’ fears of government action and the monetary rewards of accessing one of the biggest market in the world.

As a result, it’s difficult to say what exactly will happen in China. Ongoing uncertainty seems the most likely outcome.

Share this article
Tags: Asia / Bank Of China / china
Got a news tip? Let Us Know