The total average daily volume (ADV) traded on Thomson Reuters platforms during the month of July have been reported by the company at $344 billion. The figure is lower by 11% when compared to the previous month, but still higher by 8% year-on-year. Starting this month, the figures  encompass trading on Thomson Reuters Matching and FXall in all transaction types – spot, forwards, swaps, options and non-deliverable forwards (NDFs).

Average daily volume for spot trading was $99bn, which is lower by 14% over the previous month. The company’s head of FX, Phil Weisberg,  shared, “Our total trading volumes rose strongly overall in July – up eight per cent in a year.” He added that the figure represented “a strong follow-up to a spectacular June, which had been bolstered by end-of-quarter hedging activity. The market consensus is that trading is slowing, but our strength is that we are diversified, offering a range of transaction types across FX.” 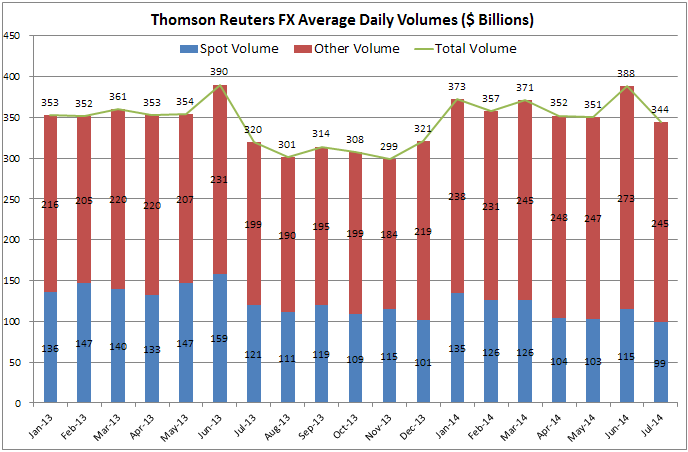 Thomson Reuters has changed the methodology which it uses to report its monthly volume numbers. The sum is a consolidated representation of Thomson Reuters/FXall trading volumes, aiming to reflect the total liquidity across all its trading venues. Separately, the company is providing a monthly total for ADV of spot trades.

The revised methodology includes a number of platforms and a number of transaction types – spot trades, forwards, swaps, options and non-deliverable forwards (NDFs). According to a company statement, “The new consolidated total average daily volume (ADV) offers a more complete and accurate picture of the trading activity we facilitate. For instance, this total will include for the first time the volume of forward trades in Thomson Reuters Matching. Thomson Reuters Dealing volumes will no longer be included.”

Share this article
Tags: fxall
Got a news tip? Let Us Know