According to publicly available data released by KCG Hotspot, the company achieved a new record high of $59.5 billion in FX trading volumes on Wednesday. With the currency market heavily long on the US dollar, traders today headed for the exit as a major selloff in U.S. equities continued and U.S. bond yields tanked to their lowest level since 2013.

KCG Hotspot reported almost $60 billion changing hands on its electronic trading platform on Wednesday, which is higher by more than $3 billion than the company’s previous record set in the aftermath of the European Central Bank President’s speech, which triggered the initial sharp spike in volatility on the forex market. 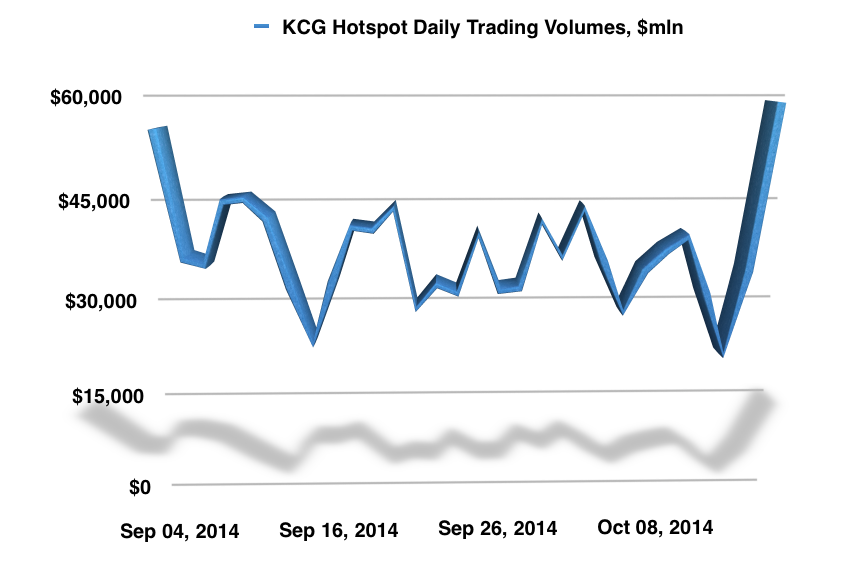 According to sources across the industry, volumes at major retail forex brokerages have also been quite heavy on Wednesday. The US dollar index lost more than a full point in trading today, as the bond market is starting to question the Fed’s resolve to raise U.S. interest rates in light of oil prices tanking and subdued wage pressures warranting low inflation.

During the day, the single european currency rallied the most since June 2013, in roller-coaster trading. With FX volatility picking up materially in September there’s been an overwhelming consensus amongst major forecasters, that the Federal Reserve is going to raise interest rates in the second quarter of next year.

Recent U.S. bond yield moves suggest that these expectations are far fetched and the wrong footed market caught up to the idea on Wednesday. The US dollar has been sold off across the board losing ground to all major foreign currencies.

The U.S. government’s bond yield dropped as low as 1.873%, which is its lowest level since May 2013. The move in bonds and stocks led investors to question the Federal Reserve’s resolve to normalize interest rates just as the U.S. central bank announced the end of its tapering effort and is on its way to stop purchasing bonds for the fourth time in six years.

All previous attempts by the Fed to end bond purchases have resulted only in more of the same policy medicine being used to drive interest rates lower and stimulate a rise in asset prices.

According to sources close to Forex Magnates the extraordinary amount of moves in the foreign exchange market is a result of massive liquidation of US dollar longs as the next U.S. central bank’s meeting is on the horizon.

Share this article
Tags: fed
Got a news tip? Let Us Know