The following is an excerpt from the brand new FM Intelligence Report on China.

China is gradually changing and opening its doors to the world in an effort to stabilize the financial sector and effectively fight the ongoing economic stagnation. Already in October 2016, the Chinese currency RMB will complete the basket of SDR (Special Drawing Right) currencies of the International Monetary Fund (MFW).

Finance Magnates in the latest issue of the Quarterly Industry Report seeks to answer the question how it could affect the trading industry.

Yuan finally in the proper spot?

The decision to include the Chinese yuan (renminbi) in the Special Drawing Right (SDR) took place in November 2015. According to the MFW’s report, RMB meets all the criteria that are necessary to be a part of the basket, which until now consisted of the US dollar, the euro, the Japanese yen and the British pound.

The Managing Director of the IMF, Christine Lagarde, stated at the time of the announcement: “The Executive Board’s decision to include the RMB in the SDR basket is an important milestone in the integration of the Chinese economy into the global financial system. It is also a recognition of the progress that the Chinese authorities have made in the past years in reforming China’s monetary and financial systems. The continuation and deepening of these efforts will bring about a more robust international monetary and financial system, which in turn will support the growth and stability of China and the global economy.”

FX and contracts for difference (CFDs) brokerages are already rubbing their hands, hoping that the widening of the IMF’s currency basket may force the Chinese government to allow their citizens to perform open and free financial transaction with foreign institutions and entities. Until now, the citizens of the Middle Kingdom have grappled with numerous investing problems, such as the limitation on exchanging and sending abroad more than $50,000 a year per person.

However, those who suggest that current changes might mean the dethroning of the greenback are probably too optimistic and wrong. The addition of the RMB will affect mainly the European currency, and not the US one. The presence of the USD in the basket will be reduced by only 0.17%, and the euro by over 7%. Renminbi will take the third position with 10.92%. 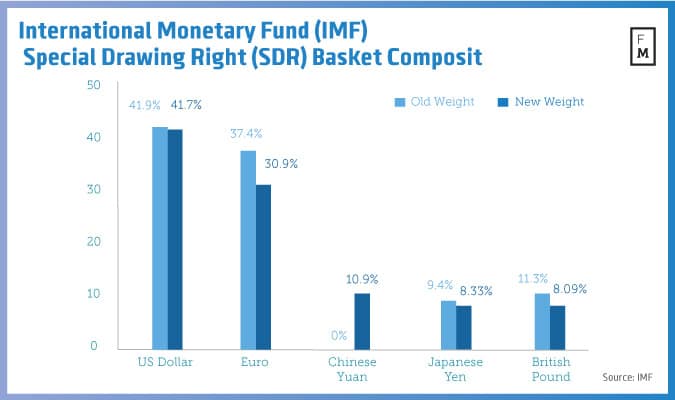 Market experts, including Itai Damti, CEO Asia Pacific at brokerage solution provider Leverate, warn however not to fall into excessive enthusiasm. It might be some time before the full liberalization of trade on RMB crosses takes place.

What is more, in the case of the range of instruments used by Chinese traders – who make up a huge potential market for brokerages – we should not expect too many changes. Currently USD/CNH provides a very small part of trading volumes in the Middle Kingdom. Gold, commodities and majors are definitely more popular assets.

In summary, the changes are certainly a move in the right direction, but it is hard to expect that free cash flow (excluding capital controls) will be implemented in the near future (if ever). It does not change the fact that since October 2016, brokers should receive a number of new opportunities to reach Asian customers and retail traders.

Want know more about the market in China? Get the brand new FM Intelligence Report.