The Australian Securities and Investments Commissions (ASIC) has published its annual report reviewing its own performance, evaluating the financial services industry and identifying challenges that will be tackled going forward.

The regulator’s broad objective is to “allow markets to allocate capital efficiently to fund the real economy and, in turn, economic growth.” As a law enforcement agency, ASIC bears the responsibility for regulating the local market and collects “fees and charges for the Commonwealth” as part of its operations. Revenues for the Commonwealth have risen yearly from $552 million in 2008-09 to $763 million in 2013-14.

Regulators Have Balance Sheets Too

If taking all costs and revenues into account, ASIC costs the Australian government $292 million in total expenditures and generates $995 million in total revenue. In 2013-14 ASIC obtained over $232 million just from “unclaimed monies” belonging to various market participants.

ASIC takes responsibility for the administration of monies received from banking and deposits taken from institutions, as well as life insurance institutions and friendly societies. In 2012–13 the government changed the definition of these unclaimed monies to include accounts or policies that have been inactive for more than three years (previously the inactive period was seven years).

Despite the stack of work and increasing dynamism of threats that ASIC would consider ‘material’, the agency is planning on cutting its budget and reducing staffing levels over the coming years. As recently as last week, ASIC Chairman, Greg Medcraft, was quoted as saying, “Australia is a bit of a paradise for white-collar crime,” in a Q/A session with business journalists in Sydney. Adding, “You have to lift the fear and suppress the greed.” Mr. Medcraft has since retracted his comments.

In the annual report outlook, ASIC states: “Our budget has been reduced by around $120 million over four years. In 2014–15, our operating budget will reduce by $44 million or around 12%. Our average staffing levels will fall by 209. We have anticipated the effect of these cuts and have been proactive in conducting a voluntary redundancy campaign. We will continue to adjust our resource allocation to reflect the available funding, and our statutory role.” In a statement that could potentially raise eyebrows, ASIC admits: “One trade-off is that our proactive surveillance will substantially reduce.”

As a sign of increasing digitisation at ASIC, the agency reports 86.1% of all 2.4 million registry lodgements were submitted online, up from 83.8% last year. Last year, ASIC registered 212,573 new companies, a 10.6% increase from last year, consolidating steady increases over the past five years.

In the 2013–14 financial year, ASIC produced 36,346 trading alerts and conducted inquiries into 224 matters. They conducted 52 risk-based assessment visits, 128 compliance reviews and “engaged with market participants to improve practices in 56 instances.” 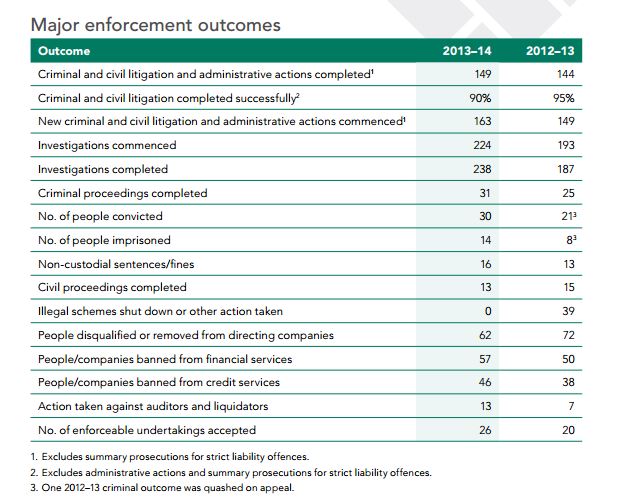 As a reminder of notable ASIC actions over the past year – in December 2013 and January 2014, ASIC accepted “enforceable undertakings” from UBS and BNP Paribas for potential misconduct involving the Australian Bank Bill Swap Rate. The rate is a key benchmark for a range of interest rate derivative products and can affect millions of market participants. Similar to LIBOR, ISDAfix and any other benchmark, the undertakings are quasi-admissions of malpractice despite the lack of an official penalty or conviction.

As a consequence, both banks made voluntary contributions of $1 million to fund independent financial literacy projects in Australia. The case highlights the parallel point that some banks are utilizing any and all available loopholes in all global markets including Australia.

A key detail of the case as, reported by ‘The Australian’ newspaper (quoting a BNP spokeswoman) back in January 2014, is that “the bank’s investigation uncovered attempts by a small number of staff in an overseas office to influence staff in Australia in relation to their swap rate submissions.” Adding, “Attempts were unsuccessful and the theoretical profit would have been insignificant.”

Assumptions as to the significance are moot – the fact that staff in overseas offices (presumably London/New York/Paris) tried to influence rates underlines the prevailing culture of ‘competitive advantage vis-à-vis revenue maximisation’ among the larger financial intermediaries.

Share this article
Tags: Asic / otc
Got a news tip? Let Us Know