It goes without saying that 2019 has been an eventful and, in many regions, a challenging year for retail brokers. Tightening regulations, lower trading volumes, and shifting trends have shaped the industry these past 12 months.

In the wake of all these changes – which regions benefitted and which jurisdictions have suffered?

The rise of the offshore broker

In August of 2018, Europe was hit with a suite of regulations that reduced leverage for retail trading of contracts for differences (CFDs), placed restrictions on marketing, and more.

Although this took place last year, Europe in 2019 has been defined by these measures, which were initially implemented as temporary, and have now been made permanent across the EU.

These regulations, in particular, the reduced leverage, saw retail traders looking outside of Europe to be able to invest with higher levels of risk, and therefore, higher levels of potential return.

Seeing this movement, many brokers followed the demand and set up offshore entities where investors could trade with higher leverage and not be subject to the EU regulation. As Finance Magnates reported, some of the main destinations to benefit from this was Vanuatu, Labuan in Malaysia, Belize, the Bahamas, and more.

Speaking to Finance Magnates on these changes, Tal Itzhak Ron, Chairman and CEO at legal firm Tal Ron, Drihem & Co. and Genia Gurevitz, who heads the Banking and Payments Services at Tal Ron, Drihem & Co said: “In the passing year, the regulatory winds have changed their course, forcing our bigger clients operating under the sought-after ASIC, FCA and CySEC regulations to shift and diversify their courses of action. Australian and European FX/CFD operations alike started operating within less mainstream regulations that are more enabling to run their business in, such as Estonia, Vanuatu, and the recent Holy Grail – the Bahamas – as their favorable jurisdictions.

“This, seeing that self-regulated financial operations, registered in Marshall Islands (still popular), or in St Vincent (which was common two years ago and virtually disappeared since then) are very problematic nowadays for receiving payments from traders (though pay-outs are still possible).

“These new courses of action, combined with Asia-Pacific banking solutions especially in Singapore, either directly (which requires a visit to the bank) or through disruptive EMIs (Electronic Money Institutions), provides brokers and operators, who wish to remain compliant at all cost, the exact solutions they were longing for. The demand is growing exponentially in a way that our firm had to hire full professional staff at these jurisdictions.”

It is important to highlight that a few years ago, heading offshore was seen – even in the often less than scrupulous retail trading industry – as an indicator of dubious business practices on the part of a broker.

However, with more jurisdictions opening up to brokers and new regulations pushing them away from Europe, heading offshore is a more reasonable step for a business to take than it was two or three years ago.

“We haven’t encountered wild-west-like behavior. The FX/CFD brokers moving to those jurisdictions are very focused on maintaining their reputation, giving their clients good trading service and experience, so they aim for the long-run,” explained Tal Itzhak Ron and Genia Gurevitz.

“Not only that, reliable brokers migrated not only for industry-related reasons. For instance, ASIC regulated operations migrated for political and public-opinion changes that took place; in practice, nothing has changed for these brokers in the way they operate, because working in highly-regulated environment is already part of their DNA.”

Brexit and ESMA: the struggles of Europe and the UK

It will come as no surprise to many market participants that during 2019, traders and brokers moved away from these regions, more than they flocked to them. The European Securities and Markets Authority’s (ESMA) tightening regulations, Brexit, and an increasingly difficult environment have all led to this change.

The effect of the changes can be seen by looking at the financial performance of some of the top brokers in the region. As Finance Magnates reported, brokers such as IG Group, Saxo Bank, and CMC Markets have all struggled with low forex and CFD trading volumes, which have weighed heavily on revenues. For Saxo Bank, in particular, the multi-asset broker has recorded some of the lowest trading volumes in years.

This is also illustrated in the graph below, which details the trading volumes achieved by brokers covered in our Quarterly Intelligence Reports in Europe and the United Kingdom. As can be seen, volumes dipped significantly from the first and second quarter of 2018 – which were the only two quarters of 2018 to be exempt from ESMA’s regulations. 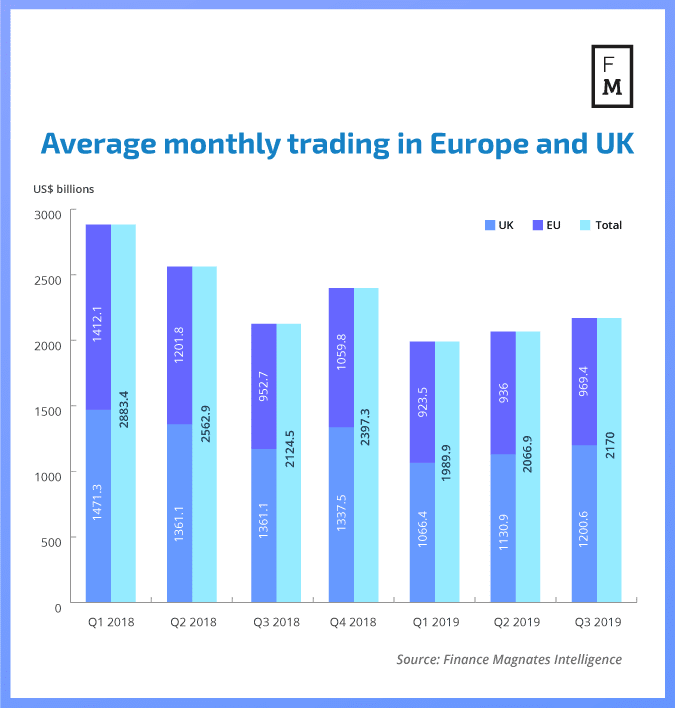 Retail traders go down under

Australia started 2019 on solid footing. As Finance Magnates reported, during the end of 2018, the land down under appeared to largely benefit from ESMA’s product intervention, as volumes surged during the second and third quarter of 2018.

This is because Australia offered retail traders an environment where they could trade using higher leverage within a well-regulated environment. This trend then continued into 2019.

Thanks to the Finance Magnates Intelligence Department we have a visualisation of how much flow migrated to Australia in 2018, which has continued into this year. The theme we see is undoubtedly confirming the regulatory migration across the industry. Clients who have maintained their risk appetite have figured out a way to find what they need – leverage in a secure, regulated environment. 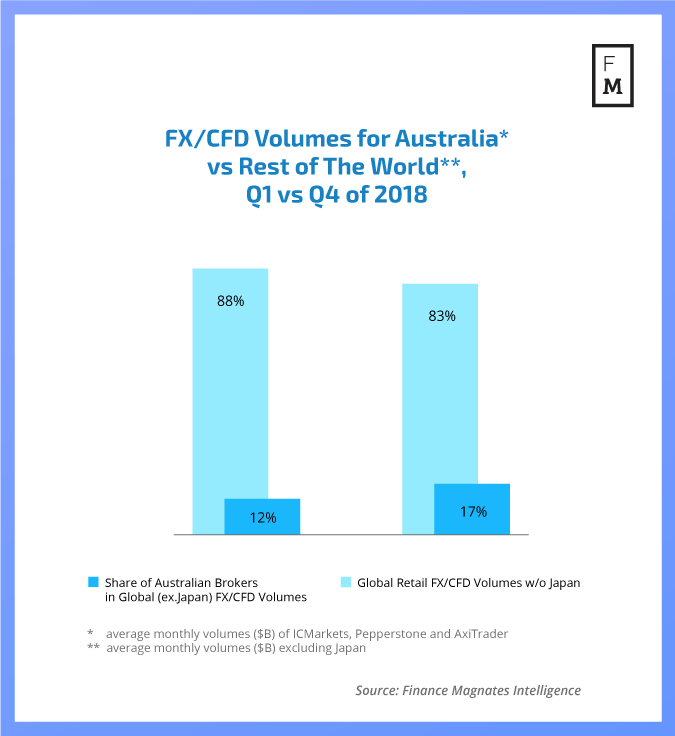 However, although 2019 may have been a good year for Australia, 2020 might paint a different picture for the country, as the local regulator, ASIC, is looking to implement its own regulations, which largely mirror that of ESMA.

Unlike ESMA, ASIC will not distinguish between major and minor currency pairs. Instead, the watchdog proposes a single leverage ratio limit for all currency pairs 20:1. For equity indices, ASIC suggests a ratio of 15:1, commodities excluding gold 10:1, Gold 20:1, crypto-assets 2:1, and equities 5:1. The measures have yet to be put into place.

Did Japan lose its dominance?

Another interesting trend that was noticed by Finance Magnates this year was Japan losing its dominance in terms of FX trading. Historically, Japanese brokers had led the way when it came to having the highest forex trading volumes.

The leaders, in particular, were GMO Click, who has consistently topped the volumes ranking in past years, and DMM.com has long been a close second. Both of these are Japanese brokers.

However, according to Finance Magnates Intelligence – there’s a new player in town – Australian retail forex and CFD broker IC Markets. The Aussie broker had previously been taking the third spot in global rankings. However, IC Markets has managed to surpass the others and enjoyed the highest FX trading volume in both the second and third quarter of this year.

Not only that, but Japanese brokers have struggled with lower FX trading volumes across the board. Kabu, GMO Click, Gaitame, among others, largely reported larger trading volumes on an annual comparison.