While 2017 was all about the cryptocurrency boom, 2018 was about its collapse. On the heels of all the crypto-drama we saw the regular retail FX market winning back the attention of retail traders. Japanese brokers yet again dominated the global scene, but some changes on the horizon could be seen. 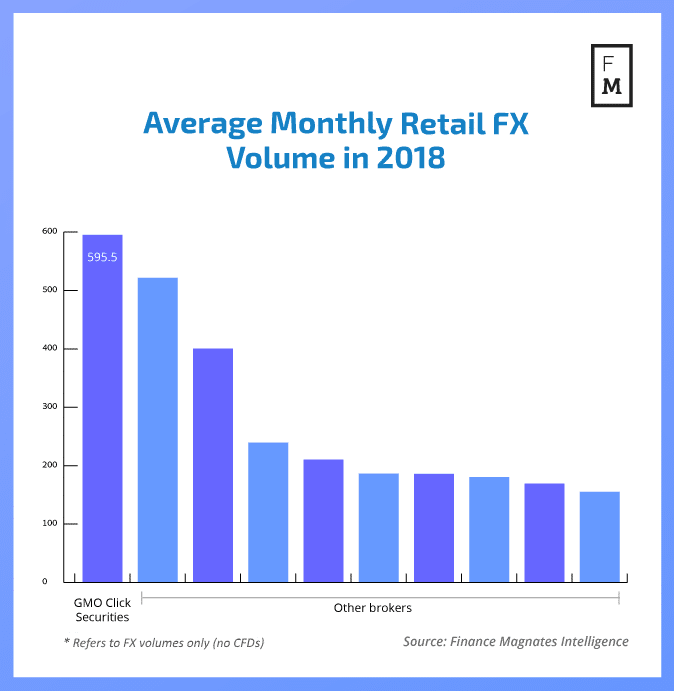 Despite the above-mentioned changes, the global leader of FX trading remained the same. Yet again, GMO Click Securities leads the rankings, with an average monthly FX volume in 2018 of $595.5 billion, slightly lower than the 2017 level of $660.3 billion. Just as last year, GMO’s Japanese rival DMM.com Securities came in second place with an average monthly FX volume of $521.7 billion.

Apart from offering FX trading, GMO Click is also very active in the cryptocurrency sector with its own cryptocurrency exchange GMO Coin. Recently, the Japanese company decided to move its mining operation to a location with cheaper electricity cost where it can pocket greater profits.

Trample the Heels of Japanese Brokers

Just as last year, third in the ranking is ICMarkets. The Australian broker closed the gap to the leading Japanese duo with its average monthly FX volume for 2018 standing at $400.3 billion. Another change was that last year, we had five Japanese and five non-Japanese brokers in the top 10. In 2017 there were six Japanese brokers among the ten leading FX brokers.

Are these meaningful changes that should continue over time? Or will the Japanese industry regain a more dominant position in 2019? We should be able to answer part of those questions after Q2 already. Finance Magnates Intelligence will reveal the full Q4 volume rankings for FX brokers in our upcoming QIR4 2018 Intelligence Report at the beginning of February.