It has been almost three months since the new regulatory framework for retail clients of forex and CFDs brokers got implemented by the European Securities Markets Authority (ESMA). The immediate result from the move was a sharp decline in trading in August.

Brokerages across different spectrums of the industry shared with Finance Magnates that the decline in client activity was brisk. So brisk that it led to a series of downgrades in the outlooks of major publicly-listed brokerage companies.

Coincidence or not, several weeks into the new regulatory environment the CEO of IG Group, Peter Hetherington resigned. Industry insiders saw the move as a testament to the failure of the company to accurately anticipate the magnitude of the impact of new regulations.

Build It and They’ll Come

While some companies in the EU have been focusing on revamping their offerings and committing to compliance with the new framework, others are taking a different approach. There is a clear difference in the strategic implementation of the new regulatory framework.

Generally speaking, there are two types of companies which are regulated in the EU. The first type is those looking to house clients from all over the globe. They are using the EU license as a front end to their reputation.

Then there are those who are focused on some specific domestic markets, be that the UK, Germany, Spain, or anywhere else. This type of companies are primarily focused on providing services to EU clients.

While the first type is keen to do whatever possible to maintain high volumes, the second type will do whatever it takes to be compliant with the EU regulations.

Granted, there is also a third type of brokers which is a hybrid between the first two. They have adopted both approaches and try to gravitate towards the more favorable strategy as they go.

While looking through the websites of regulated companies across the EU, one would be hard pressed to find a CySEC-regulated broker which doesn’t have an offshore subsidiary. The firms are racing to fill in the gaps as their traders demand to trade with high leverage.

Most FCA-regulated brokers have instead focused on complying with the new rules. The firms are heavily exposed to the local market and are actively developing new products to remain relevant.

Since ESMA announced its intentions for a new regulatory framework, the institution has been resisting to consider any feedback to the proposed changes by both clients and brokers.

The news about the new regulatory framework has angered many traders as they cannot choose what risks they want to take. Of course, the brokers have been worried about the scope of the changes to their business model and their ability to continue operating in the new environment.

ESMA’s failure to listen to the parties involved in the industry is underscored in a desperate message from the AMF to retail clients from a few weeks ago.

In a letter published on its website (as if retail clients read it), the regulator stated that the purpose of the new framework is investor protection. The French regulator encouraged investors to “resist certain online trading platforms’ efforts to circumvent and remove the protections put in place by the regulators.”

The AMF also underlined that it is aware that some brokers are suggesting to open an account offshore. What else could they do if they are asked by the client who is interested in trading with high leverage?

Clients are willing to take the risk to move their money to an offshore-regulated entity. The dream to beat the market overshadows negative balance protection, investor compensation schemes, leverage limits, etc.

The Chairman of the Autorité des Marchés Financiers, Robert Ophèle, stressed: “The goal of the regulators was not to allow only a select few to trade CFDs and binary options but rather to better protect investors against an identified risk of loss.”

It would seem that ESMA and the French regulator greatly underestimated the risk appetite of retail investors.

In the meantime, new, unregulated brokers have been popping up here and there. Some company owners have been boasting on social media that they have the perfect recipe for affiliates. They are attracting them with promises of high commissions, big returns for customers due to algo trading, and who knows what else.

ESMA’s failure to prevent a flight offshore is making life difficult for EU-regulated companies. In the meantime, the ‘Wild West’ part of the industry is just waiting around the corner with an offshore paradise proposition.

Just have a look at two examples of a trading record that makes clients rich and another one that shows affiliates how they will join the clients they bring to a new Cook Islands brokerage company.

According to the Cook Islands FSC, companies do not need a brokerage license in the country to operate one. Firms operating brokerage companies can instead get a money changer license. The legislative framework doesn’t specify capital requirements. The Cook Islands doesn’t have a legal framework that regulates the sale of securities.

If you were wondering how this is possible, the next screen shows that: 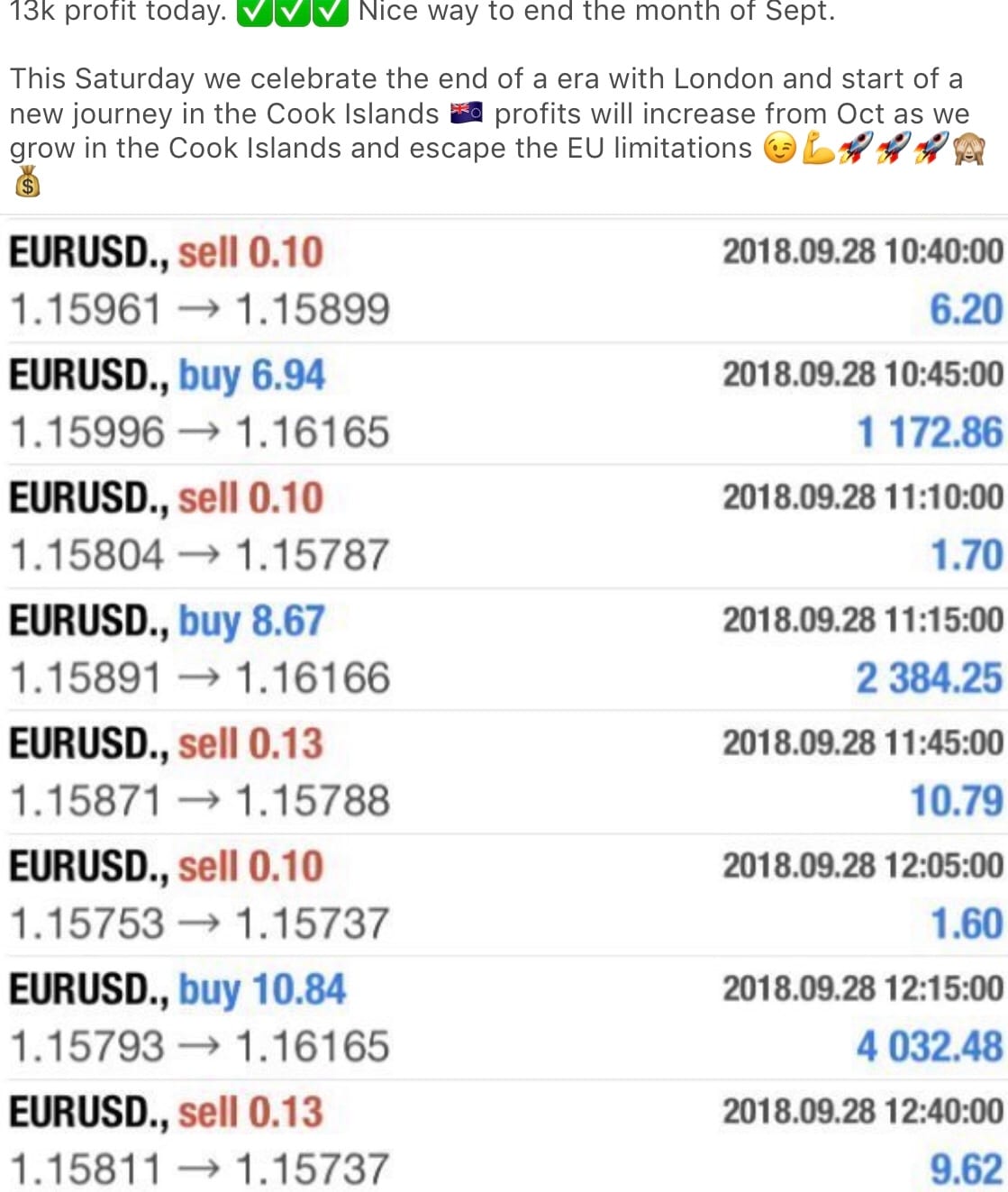 It might be easy to convince some uneducated retail investors and affiliates that they someone can make 3% per month and get 15% bonus if they refer new clients. In real life, we have media and regulators whose job is to raise awareness about such advertisements.

There has been no case in the history of the financial industry when the perpetrators of advertisements that promise extraordinary returns don’t end up misappropriating client funds.

There is rarely an opportunity for creative metaphoric articulation when writing about the forex and CFDs trading industry. At least that has been my experience until today. While curiously observing how the market reacts to the new regulations from ESMA, it suddenly hit me.

Very brief article touching all 3 parties: customers, brokers and regulators. EU is lossing lots of money due to this regulation. It should be done with a deeper research first.

ESMA have inadvertently put investors at more risk, not only are people moving funds to unregulated brokers offshore, but due to the ramp up in leverage they are also preventing people from properly hedging their own portfolio’s due to the lack of ability to run a more balanced portfolio due to higher margin. They have in effect created an environment that has created more risk for the individual not less…

ESMA is just the mirror of the stupid, nonresponsible desk-bureaucrat world that the whole EU transformed gradually. No retail trader could make money with such leverages, not worth the time to do so, or you need keep horrendous amount of money with a ridiculous EU “protection” process. Shame, shame, shame. But the guys inside the ivory tower are do not care. They want folks keep money in 0,1% interest at big banks. ESMA is socialism, in its worst form. European Union ‘= Soviet Union. And i just quoting…

Like it or not, ALL INVESTMENT IS A GAMBLE. you pay your money and you take your chance. ESMA have no right to impose regulation on retail investors. I am delighted that these Regs have BACKFIRED. Investors and brokers should stand together and DEMAND that these restrictions are removed IMMEDIATELY !

As CEO of an europe based forex company I can see that clients take higher risks than before. Because of the lower margin they use much more margin than before. Also the trading results did not change at all, in case they became worse.

ESMA should start thinking about their new regulation asap.