After initially having a focus on the financial industry, Dataminr has found success in other sectors for its real-time data analysis product. Using social streams such as Twitter, Dataminr is able to alert clients of news happenings in real-time before they are recognized by the mainstream media. With advancement of its product, Dataminr’s now includes customers in the financial, media and government sector, using the service for its real-time alerts.

Following the growth, Dataminr announced that it has raised $130 million in a funding round with heavy participation from the financial sector. The funding follows a $30 million round raised in 2013 and illustrates the strong interest among investors for big data related startups. Participating in the round, include Fidelity Investments and Goldman Sachs as well as John Mack, former CEO of Morgan Stanley, Vikram Pandit, former CEO of Citigroup and Tom Glocer, former CEO of Reuters. 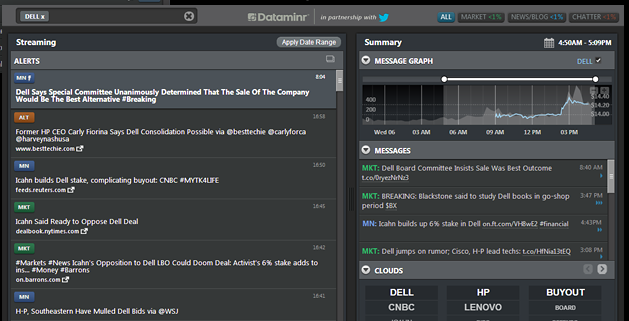 According to Ted Bailey, Founder and CEO of Dataminr, in a blog post about the deal, the funding will be used to “enable Dataminr to meet the tremendous global demand for our products, expand into new verticals, and integrate valuable new datasets into our algorithmic engine to enhance our Twitter-based signals and broaden our offering.” As an example of the their growth in non-financial sectors, Bailey stated that since launching ‘Dataminr for News’ last year, it has grown from being used at one newsroom to 150. He added that their service was being integrated by government institutions that use the solution to help first responders be alerted in real-time about disasters.

Within the financial industry, Dataminr is used by traders who configure the real-time search to alert them about potential price moving events for stocks and other traded assets before they are reported by traditional media sources.