After the popular cryptocurrency trading platform Coinbase went down during a time of high traffic, with its app and its website failing to load for many people, the price of Ethereum has tanked again. The ETH/USD exchange rate went as low as $250 per Ethereum token, before rebounding to $270 after the problems were fixed. 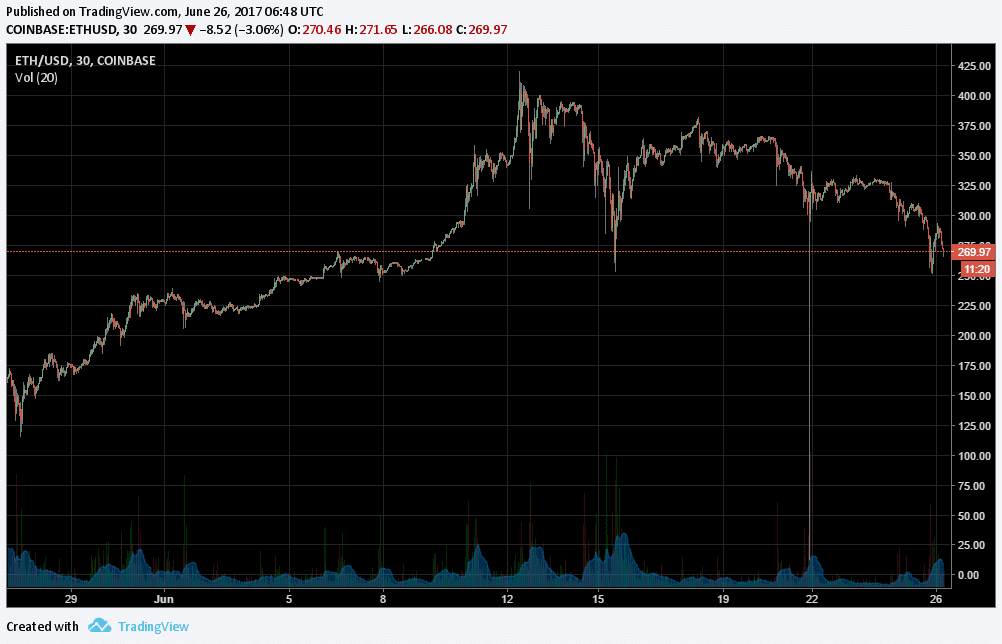 Coinbase has been taking the blame in online community forums and social media for the drops in the price of both Bitcoin and Ethereum.

Two weeks ago when the BTC/USD exchange rate crashed to just $2120 per bitcoin, Coinbase suffered another major outage.

Last week an Ethereum flash crash caused ETH to temporarily trade as low as $0.10 on GDAX, the institutional exchange platform of Coinbase. However, that instance was found to be a ‘whale’ cashing out, probably related to one of the latest massive ICOs.

This time, without other competing negative ETH stories, Coinbase is receiving all the wrath of the community. Some people are calling on traders to switch away from the exchange and thus reduce its impact on the market.

For long term Ethereum holders this should not be seen as a killer moment in itself, as the price only retracted to the record high price it reached only earlier this month, up more than 2,800% year-to-date. And the price did bounce back from the crash to the $320 level, so maybe it will recover another $50 soon this time too.

The real concern should be another massive ICO runner dumping their ETH in exchange for bitcoin or fiat, which could have a more lasting impact than technical difficulties at one venue.

Share this article
Tags: coinbase / Ethereum
Got a news tip? Let Us Know