The price of bitcoin is down sharply right now and it appears to be heading to collapse further. The BTC/USD exchange rate stand at just $2120 per bitcoin right now, down from as high as $2500 earlier in the day.

The most likely reason is that Coinbase is down again and new traders that were attracted to the market by the recent rally are dumping bitcoin out of fear of unknown problems that might be revealed. This has happened before, most recently in May in a similar fashion.

According to the Coinbase status page, trading service service on both the Coinbase website and its mobile app is down right now. The status itself is: “Investigating – Our team is investigating issues with Coinbase.com load times. Customers may be unable to load or log in to the website during this time.” 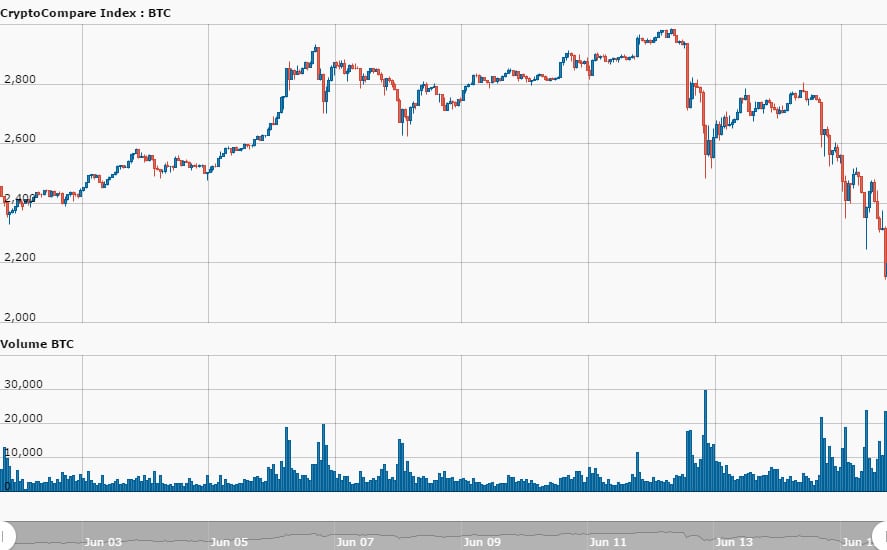 Charles Hayter, the CEO of CryptoCompare.com, comments: “Fear is entering the market and people are panicking. We are seeing red everywhere. Traders are panicking and selling as fear takes hold over exuberance. The extraordinary gains have left frothy markets.”

Time will tell if this is the start of a major reversal in the meteoric price rise which will reduce the size of the entire cryptocurrency ecosystem to smaller figures or just an opportunity for quick traders to go in before it returns to its near $3000 per bitcoin price levels.

The world’s second biggest cryptocurrency Ethereum is also down sharply right now. From a high of $375 in the last 24 hours, it is now trading at just $287.