As I predicted over the weekend, Bitcoin is struggling to rise above a confluence of resistance zones represented by two key Fibonacci retracement levels on different timeframes.

If you recall, during my previous BTC/USD analysis, I posted the following two charts (Weekly and Daily timeframe respectively):

Where I mentioned. “Price has hit some resistance, marked by key Fib levels, which could play an important role in determining market action this week… The parallels couldn’t be clearer. Namely, the 38.2% Fib level on the Weekly is at the same location as the 61.8% Fib level on the Daily. Well, for the short term at least, it tells us that price is probably going to struggle to rise beyond 565, not helped by the overbought Stochastics.” As it turns out, as midweek passes us by, these confluence of Fibs, (38.2% on Weekly and 61.8% on Daily), have proven to be an extremely strong combination of resistance, as can be seen via the current BTC/USD D1 chart below: 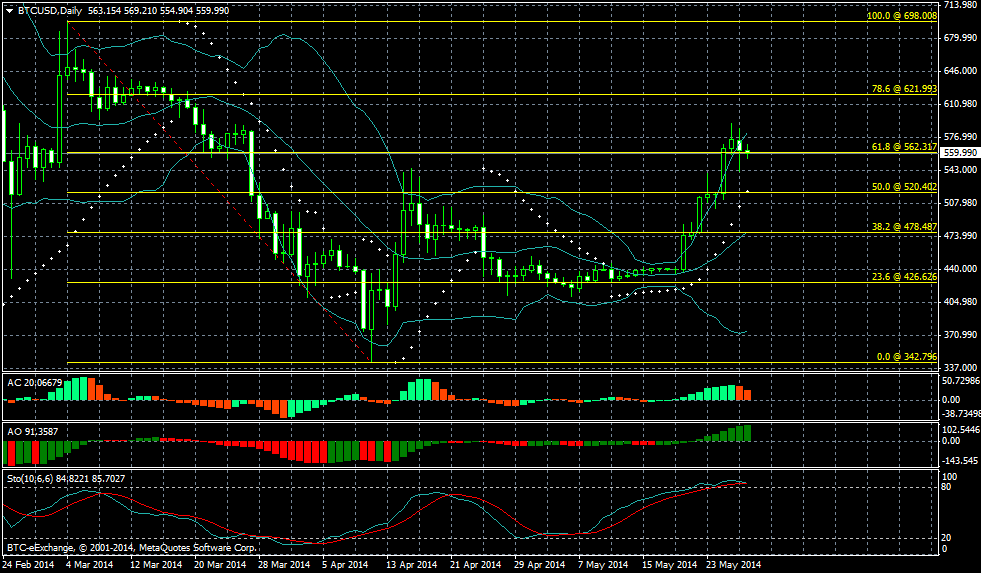 “If the Accelerator Oscillator turns red early this week (on the Daily), we may well see some bears take a bite out of this green apple.”

Well, the Accelerator, unsurprisingly turned red yesterday, and since then we’ve seen the bears have their predicted nibble, albeit they must be chewing pretty slowly. However, if the Awesome Oscillator turns red on Daily later this week, we could see these bears take a bigger chunk, and a fall back down to the 50% mark at 520 could ensue. I don’t expect much change for the rest of today.