Analysis provided by Ashton Fraser, learn more about his trading strategies at the Lasers forex forums.

The month of July saw a consistent fall for Bitcoin, as the bears took firm control, hitting a low of 555. However, strong support had prevented price from further southern movement. Since then, we’ve had some bounces of a key Fib level.

Let’s take a closer look at the latest BTC/USD Daily chart below (click to expand): 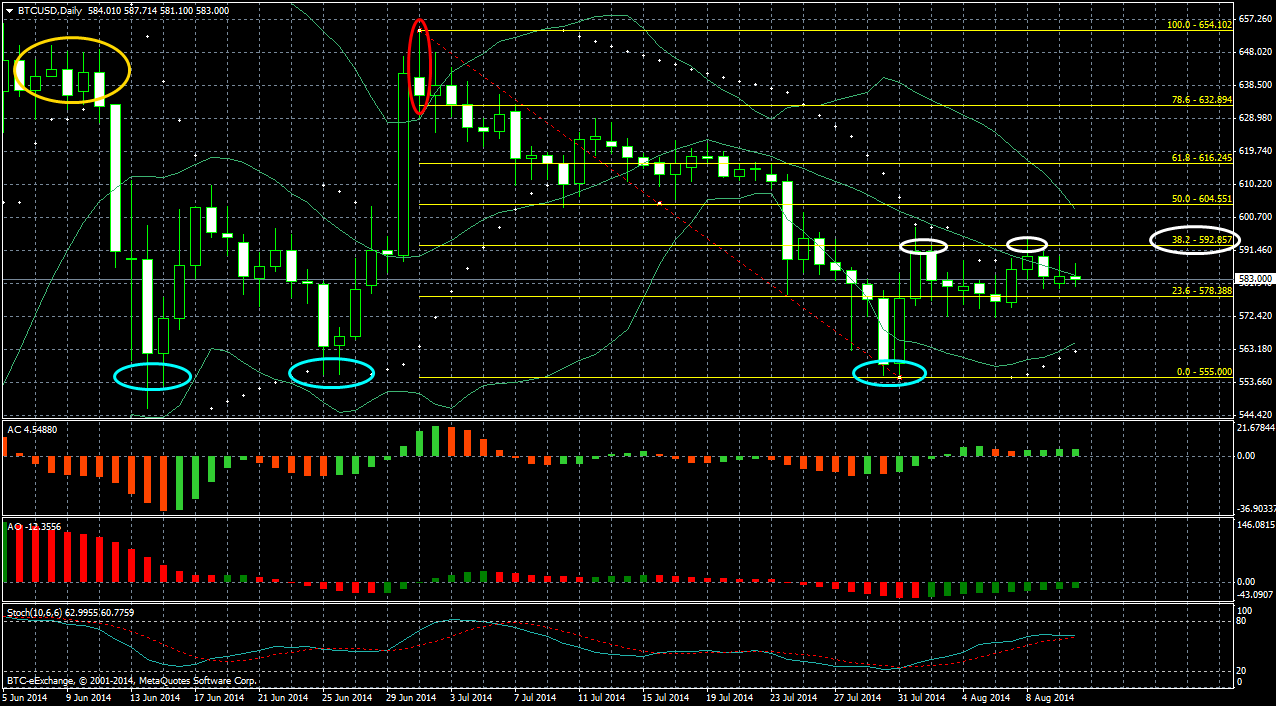 Thus, at the start of July, price fell from 655, virtually unobstructed, initiated by two key technicals. Firstly, we had of course major resistance by way of the multitude of ranging candlesticks in early June, highlighted in yellow. In addition, the actual daily candle on the 1st of July (marked in red) closed as a powerful bear candle in its own right, as it both opened and closed above the upper Bollinger Band, whilst its upper wick was relatively rather long. With these two factors combined, unsurprisingly there was a sell off. Soon after, the Accelerator Oscillator turned red, and along with the Stochastics beginning to cross down whilst in an overbought position, it allowed the move to gather momentum. What was rather surprising was the consistency of these bears, despite some mild support in the middle of the month, there wasn’t much in the way.

Having said that, if the support at just above 600 wasn’t enough to stop the bears in their tracks, the support at 550 definitely was, and for good reason, since this area has been tested twice before, back in June (highlighted in blue). Thus, it was almost a given we were to expect at least some changing of the tide at this location, although not necessarily a complete about turn.

Since the beginning of this month then, we’ve seen price rise and test the 38.2% Fibonacci retracement level at 590 on two occasions, marked in white, resulting in a narrow band of trading. If, price does manage to rise again this week, I maintain that 38.2% will hold firm once again.